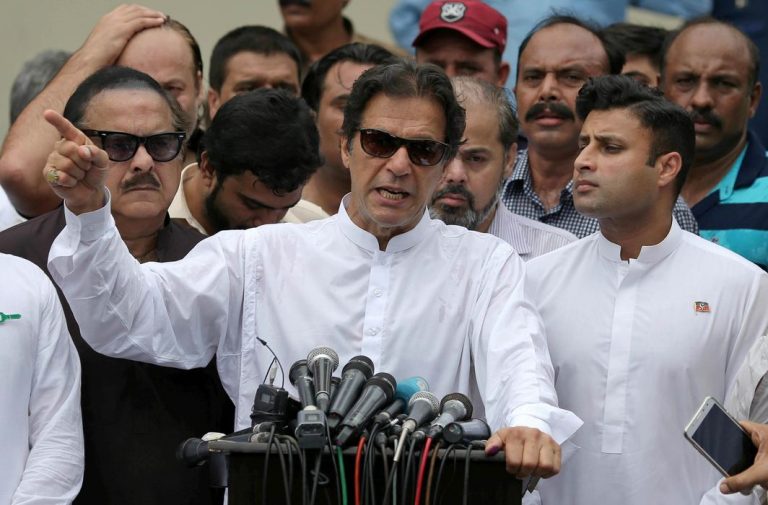 With the Lahore High Court allowing the former PM to travel abroad for medical treatment, the government has been caught by surprise and doesn’t want another martyr to undermine its interests

The doctrine of necessity, which seeks to justify an action carried out by an extra-constitutional authority to restore order, is based on the writings of British jurists Henry de Bracton and William Blackstone. Although this doctrine has never been used in Britain, courts in Pakistan have applied it liberally to justify military coups or military-backed verdicts.

The recent judgment of the Lahore High Court asking the Imran Khan government to remove the name of former Pakistan Prime Minister Nawaz Sharif from the Exit Control List (ECL) so that he can travel abroad for medical treatment has set a new precedent in law. In fact, it is another instance of the doctrine of necessity without mentioning it.

The ailing ex-PM was flown to London last week in an air ambulance for medical treatment.

This is the first time in the judicial history of Pakistan that a convict has been allowed to travel abroad for medical treatment. It was the Pakistan Supreme Court which took the lead in this case when it granted six weeks’ bail to Sharif on March 26, 2019, to avail of medical treatment in Pakistan. Sharif has been serving a seven-year jail term in a series of corruption cases. A three-member bench of Chief Justice Asif Saeed Khosa had rejected the plea of Sharif’s counsel that, given the medical condition of his client, he should be allowed to travel abroad for treatment. Sharif duly returned to jail after the expiry of the six-week bail.

However, the situation took a dramatic turn in October when Sharif’s personal physician, Dr Adnan Khan, visited him in jail and found that his blood platelet count had dropped to a dangerous level. He was rushed to the Services Hospital in Lahore. However, instead of getting better, his condition worsened. His brother, Shahbaz Sharif, filed a bail application in the Islamabad High Court. Considering the political consequences in case anything happened to Sharif, the plea was not opposed by the government. The bail opened the door for Sharif to go abroad. The seriousness of his medical condition, which was confirmed by five medical boards of the Punjab government where Imran’s Pakistan Tehreek-e-Insaf  (PTI) is in power, forced the federal government to declare that it would not oppose his going abroad for treatment.

This declaration set tongues wagging and gave the impression that a deal had been struck between the Sharifs and the military establishment. It is well known in Pakistan that Shahbaz is in the good books of General Headquarters in Rawalpindi. People said that the Sharifs had outwitted Imran who came to power on an anti-corruption plank and on numerous occasions had made it clear that he would not allow Sharif to go abroad without the return of the “looted national wealth”.

A tweet by Salman Shahbaz, son of Shahbaz Sharif, gave further credence to this “rumour”. Salman taunted Imran by saying that his “game-changer” father had taken out his uncle from the place where the “selected” had vowed to take out “fan and TV”. By “selected” he meant Imran who had in his speech to the Pakistani diaspora in the US vowed that when he returned to Pakistan, he would take away the fan and TV from Nawaz’s cell as he was enjoying facilities which were denied to ordinary prisoners.

Fearing that such rumours would severely dent not only his political narrative but also his vote base, Imran, who has become famous for U-turns, did another volte-face and announced that the government would give Sharif a “one-time” permission to travel abroad for his medical treatment for a period of four weeks. But he added a caveat—permission would be subject to the Sharif family submitting an indemnity bond to the tune of Rs 7-7.5 billion.

Shahbaz, who is also the PML-N president, rejected the government’s conditional decision, calling it a “ransom” and accused it of playing “dirty politics” with the former prime minister’s health. He also declared that his party’s legal team would approach the Lahore High Court against the government’s decision.

On November 16, the Lahore High Court allowed Sharif to travel abroad for four weeks and said that this duration could be extended based on medical reports. Throwing out the government’s condition of indemnity bonds for Sharif’s travel, the Court ordered the federal government to remove his name from the ECL without any conditions. The Court’s order said: “Mian Mohammad Nawaz Sharif is granted one-time permission to travel abroad as an interim arrangement for four weeks and will return when certified by doctors that he has regained his health and is fit to return back to Pakistan.” Both Sharif and Shahbaz gave an undertaking on Rs 50 stamp paper.

The most intriguing part of the judgment is that while granting Sharif in­terim relief, the Court formulated five points and admitted the petition for regular hearing which will be fixed in the third week of January 2020.

The law points are as follows:

Senior Pakistani journalist Mohammed Malick said the verdict made it clear that there are two laws in Pakistan—one for the rich and powerful and the other for the poor and powerless. Strangely, the verdict was announced first and the hearings will take place in January. This means that the verdict which will be pronounced after the hearing will be applicable to ordinary Pakistanis, he added.

Another surprising aspect was that Attorney General Anwar Mansoor Khan did not appear on behalf of the government and was noncommittal when asked if the government would appeal against the verdict in the Supreme Court. He said he would present the pros and cons of the decision before the cabinet and it was for it to decide.

Apart from legal repercussions, the verdict has much bigger political implications. Reacting to the verdict, Chaudhry Aitzaz Ahsan, a prominent lawyer and senior leader of the Pakistan People’s Party, reportedly said: “This shows that a Punjabi prime minister is treated differently from a Sindhi prime minister.” He was referring to Zulfikar Ali Bhutto, who was hanged by Zia-ul Haq. He also questioned the way former president Asif Ali Zardari, who has not been convicted in any corruption case, was being treated. He said all alleged corruption charges against Zardari emanate from Sindh and he should be tried in Sindh.

On this issue, even the attorney general has agreed with Ahsan. He reportedly said that there was a perception that different rules were applied to different people. It was clear from the day Sharif’s health deteriorated that the military establishment wanted him to go abroad for treatment. Senior Pakistan analyst Najam Sethi said: “The Establishment was concerned that another martyr—and a popular Punjabi one to boot—would severely undermine its institutional interests.”

The biggest loser in this game is Imran Khan. It is said that he is surrounded by a coterie which has misguided him on this issue. They thought that they could use the Rs 7-7.5 billion indemnity bond to further their narrative of getting “looted national wealth” back. But it backfired as two important allies—Chaudhry Pervaiz Elahi and his cousin Chaudhry Shujaat Husain of the Pakistan Muslim League-Quaid (PML-Q) and MQM Senator Muhammad Ali Saif—opposed the government’s move to put conditions on Sharif’s departure.

Open criticism by the Chaudhry brothers, on whose support the PTI governments at the centre and in Punjab stand, has set tongues wagging in Islamabad, heralding uncertain times for Imran. Although he has on numerous occasions said that he and the military establishment are on the same page, Chief of the Army Staff General Qamar Javed Bajwa’s recent comment that the armed forces have played a key role in uplifting the country’s economy shows which way the wind is blowing.

A senior political analyst who is considered close to Imran reportedly said that though no conspiracies are being hatched at GHQ against the government, the “system” is slowly withdrawing its support from the Imran government.

These are interesting times, indeed.