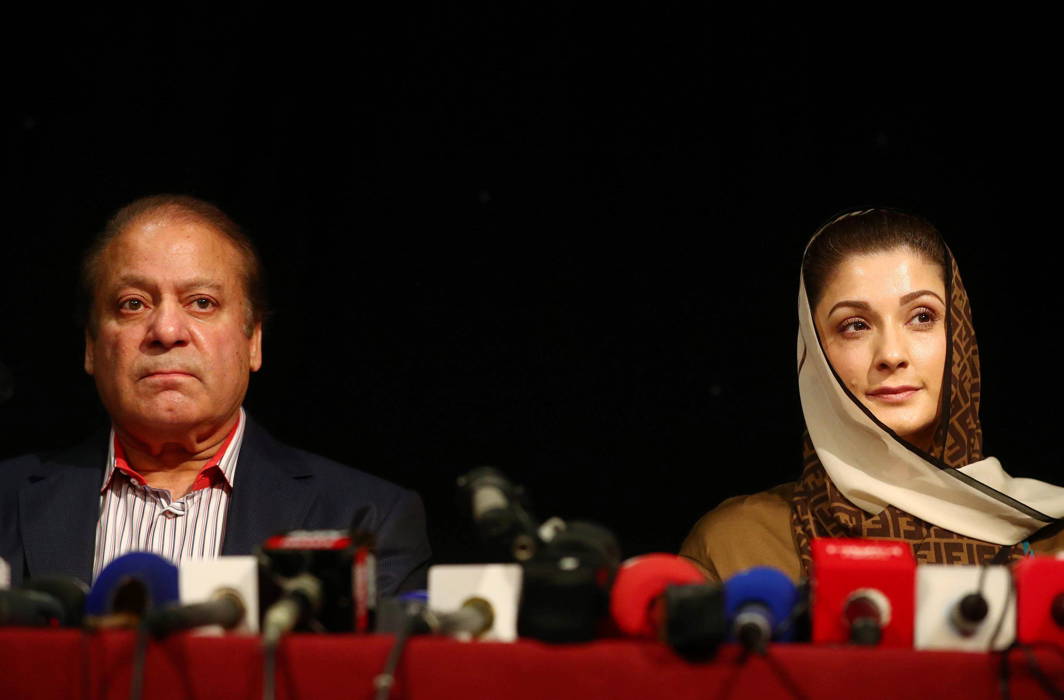 Above: Nawaz Sharif (left) and Maryam Nawaz were jailed for alleged corruption/Photo: UNI

With the courts ordering the release of Nawaz Sharif and his daughter, judicialisation of politics has once again come into play, showing how unjust it has been to elected politicians

~By Raza Rumi in New York

Pakistan’s judges have been adjudicating on political contests since the 1950s and the record, on balance, remains tilted against elected politicians. The case of former Prime Minister Nawaz Sharif is no different. In July 2017, while in his third term, the Supreme Court of Pakis­tan disqualified him from holding public office. Since then, the fortunes of the Sharif family—a super-rich political dynasty—were on a decline.

In July 2018, Sharif’s party, the PML (N), lost the elections and his arch-foe, Imran Khan, won with a slim majority. Earlier, Sharif had been incarcerated along with his daughter, Maryam—widely seen as the heir apparent—and could not campaign effectively. His brother, Shehbaz Sharif—three times chief minister of Punjab—has been struggling to keep the party together.

The National Accountability Bureau (NAB) Court had ruled that Sharif and his family laundered money in the 1990s to pay for four luxury apartments in Avenfield House, an apartment block in Park Lane, central London. These charges followed the Panama Papers leaks and subsequent investigations by NAB and other agencies. The Court also sentenced Maryam to seven years’ imprisonment and imposed heavy fines on the family. It also ordered the seizure of the Avenfield properties. However, the judgment in this case was based on a number of presumptions and many legal experts had warned that higher courts would not uphold it as the evidence was shaky if not absent altogether. Most importantly, the prosecutors were un­able to establish a direct link between Sharif and the properties.

And this is what happened on September 18. Weeks after the NAB Court judgment, Sharif and Maryam were released on bail after the Islamabad High Court suspended the sentence against them. “The prosecution has failed to show the properties belong to Nawaz Sharif. It also failed to prove how was Maryam Nawaz sentenced under the same charge sheet which convicted Nawaz Sharif,” Justice Athar Minallah, one of the judges hearing the case, remarked. The NAB, which instituted the case, has appealed to the Supreme Court.

At least for now, Sharif and his daughter have received a break. But their release has been overshadowed by a personal tragedy. Sharif’s ailing wife, Kulsoom, passed away due to cancer in London while he was still in jail. The government released him on parole, but it was too late. The family is in mourning and the father-daughter duo has been silent in recent days. Perhaps, they are also wary that if they resume adversarial politics, there may be a renewed jail term for them. It is a tricky situation at best.

Sharif’s party ideologues have been reminding their constituents that the unfair jail term was politically motivated, largely to keep him away from the election trail as it could have boosted his party’s chances in the July 2018 elections. Some analysts have also remarked that with the immediate pressure off, the courts were “allowed” to adjudicate freely. It is difficult to verify such claims as meddling in judicial matters by outsiders, especially the deep state, is virtually impossible. But what is clear is that court verdicts are part of political contests in Pakistan. They are, therefore, controversial, and utterly defeat the purpose of constitutional guarantees that expect an independent judiciary to safeguard citizen rights.

On September 14, Pakistan’s leading journalist, Najam Sethi, who is known and much-maligned by the powers-that-be for his critical views, wrote in The Friday Times: “Maryam and Nawaz Sharif’s trials and tribulations must rank as one of the most unjust episodes in Pakistan’s judicial history. As a thrice elected prime minister, he was hounded for two years before being hung out to dry as a local Don Corleone by a judicial verdict pegged to an insignificant ‘undeclared but unreceived’ income accrued during the term of his exile abroad on the orders of a military dictator.”

Sethi also added what few in the media have said: “Later, he [Sharif] was denied exemption from over 100 personal appearances in the courts….On several occasions—September 2017, Feb­­ruary 2018, March 2018 and June 2018—both Maryam and Nawaz Sharif cited Kulsoom’s deteriorating condition in a London clinic as a reason for seeking relief so that they could see her but on all save one occasion, in November 2017, this was denied.”

The manner in which the NAB Court exercised its powers and sentenced Sha­rif was far from transparent and, therefore, the prospect of a free and a fair trial (another constitutional guarantee) was sabotaged. But Sharif is not the first (nor sadly the last) politician to receive such treatment from the courts.

The macabre history of judicialisation of politics started as early as 1953 when the government of an elected PM, Khawaja Nazimuddin, was dismissed by then Governor General Ghulam Moham­mad. Later, the assembly was dismissed in 1954 when it curtailed the powers of the governor general. This action was condoned by the federal judiciary led by Justice Muhammad Munir in Federation of Pakistan v. Maulvi Tamizuddin Khan. Justice Munir declared that the constitutional assembly had “lived in a fool’s paradise if ever seized with the notion that it was the sovereign body of the state”.

Furthermore, this is when the famous doctrine of necessity emerged as a useful instrument to justify extra-constitutional decisions. Justice Munir employed Bracton’s maxim “that which is otherwise not lawful is made lawful by necessity”, and the Roman maxim urged by Jennings which said that “the well-being of the people is the supreme law”. The stage was set to justify subsequent coups in the country by the courts. While coups are out of fashion now, redirection of the country’s politics is mediated by courts with the support of mainstream media. The ghost of the doctrine of necessity lives on.

In the 1970s, Zulfiqar Ali Bhutto, Pakistan’s popular prime minister, was convicted for murder “on the bare confession of an approver, kept in solitary confinement and executed in a prison yard”, as reminded by Sethi. Later, one of the judges on the Supreme Court bench confessed on national television that he and his brother judges were under pressure to declare Bhutto guilty. Bhutto’s daughter, Benazir, met the same fate as she was incarcerated and exiled, and when she did return to Pak­is­­tan and got elected, she was thrown out from office twice in the 1990s. Sharif was also dismissed twice—in 1993 and 1999. The latter was through a coup, which was also sanctioned by the Supreme Court.

In 2007, however, judges and lawyers stood up to Gen Pervez Musharraf after he fired then Chief Justice Iftikhar Chaudhry in an arbitrary manner. For the next three years, there were street protests and public opinion shifted in favour of an independent judiciary. Justice Chaudhry was reinstated after more than two years of struggle led by lawyers and joined in by political parties. Ironically, Sharif was a leading voice in support of Justice Chaudhry. But at that time, it was also an instrument to pressurise the government led by Sharif’s rival party—the Pakistan People’s Party. So the independence of judges was once again more of a political slogan than something that could be backed through legal and judicial reform. There are still levers whereby the executive can meddle, if not pressurise, judges.

The lawyers’ movement (2007-10) was able to get rid of military dictator Gen Musharraf and restore parliamentary democracy, but when it came to the institution itself, there were no substantive changes. Today, not unlike India, the courts are overburdened by cases and antiquated civil and criminal procedures introduced by the British are firmly in place. The total backlog this year is well over 1.8 million cases. And the incumbent chief justice, like his predecessor, Justice Chaudhry, is owning populist causes such as building of dams and fixing health and education facilities, to name a couple.

But legal commentators have raised issues about the direction of Pakistani courts, especially the use of suo motu. Babar Sattar, an Islamabad-based lawyer, wrote for The News on February 8, 2018: “The problem with suo-motu mode of justice is that it can highlight issues but not fix them. When the SC takes notice of an issue, everyone stands up to pay attention at first. But when public officials are howled down in courts and strictures passed against them make TV headlines day-in and day-out, the extraordinary becomes the new normal and eventually the mundane. We experienced this during the Iftikhar Chaudhry era. Scandals were exposed, cases registered, power-wielders chided. But the sum total of sustainable change was naught.” In short, des­pite the noise and public approval ratings, the justice system needs to be fixed in a holistic and substantive manner.

What now? Anti-corruption trials have been in vogue since the early years of the country. They are mainly driven by public demand for accountability of those who wield office, but in reality, they provide the permanent institutions of the State—the judiciary and the civil-military bureaucracy—ample leeway to manipulate the course of politics. Sha­rif’s trial will remain a useful ploy to keep him under check and ensure he is not a threat to the established order.

Asif Ali Zardari, husband of Benazir, also stayed in jail for more than a decade and faced trials on a number of charges for 27 years. Only last year, the courts dismissed the old stock of cases. Now he faces more cases of money laundering and due to this pressure, he has been relatively soft as an opposition leader and playing the game.

The cases against Sharif in the short term will continue to keep him in the dock. Perhaps he may have another stint in jail or may choose temporary exile, but one thing is certain: he is a “problem” for the powerful State institutions and more importantly, his rival, Imran Khan. Now armed with a fiery daughter who is well-connected with the support base in Punjab, the Sharifs are here to stay as a powerful political force.

— The writer is affiliated with Pakistani newspaper Daily Times, Director Park Center for Independent Media, Ithaca College, USA. His book, Being Pakistani: Society, Culture and the Arts, was recently published by HarperCollins India