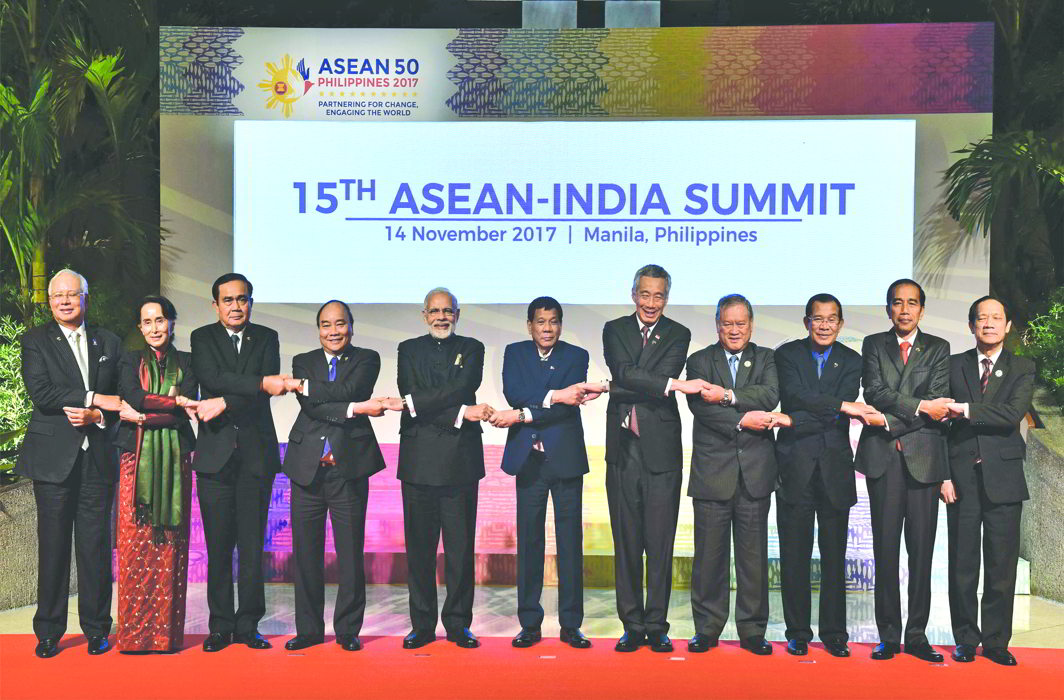 Above: Prime Minister Narendra Modi along with other leaders who attended the ASEAN-India Summit in Manila, Philippines. Photo: UNI

The Association of Southeast Asian Nations (ASEAN) has played a significant role in bringing India out of its sub-continental moorings. It was the economic reforms of 1991 and the consequent opening up to foreign investors, which propelled the 10-nation ASEAN grouping to take an interest in India. Today, Indo-ASEAN relations have come a long way.

Both the UPA and NDA have strengthened ties with ASEAN neighbours. “Our prime minister’s visit takes place in a landmark year because we are celebrating 25 years of India-ASEAN dialogue partnership, 15 years of summit-level participation and five years of  strategic partnership with ASEAN,” Preeti Saran, secretary, east, in the ministry of external affairs, told reporters at a briefing ahead of the visit.

The prime minister, in keeping with his proactive diplomacy, has invited all 10 ASEAN leaders for the Republic Day parade on January 26. He was also first Indian leader to invite the US president (Barack Obama) for the 2015 parade.

Singapore played a vital role in getting India into ASEAN. That gamble has paid off, with Delhi now poised to play a larger role in the emerging security architecture of the thriving Asia-Pacific region. In fact, the first meeting of officials of the US, India, Japan and Australia, on what is known as the Quadrilateral, took place in Manila on the sidelines of the summit.

The Quad is a loose alliance of democracies who wish to take an active part in guarding the sea lanes of the thriving Pacific region. The idea behind the move is to counter China’s growing military clout in the Asia-Pacific. Though this is just a preliminary meeting, the idea is an old one. It was first articulated by Japanese Prime Minister Shinzo Abe, during his initial term as prime minister.

However, the time was not right then. China protested vociferously, Abe lost power and Australian elections threw out John Howard and brought in Kevin Rudd, a Mandarin-speaking leader who believed in close co-operation with China. The effort fizzled out.

Now, nearly a decade later, with China becoming both more powerful and aggressive and claiming the rocky islands around the South China Sea and the East Pacific, the time for the Quadrilateral-plus has come. The plus includes all other nations wanting to take part in ensuring that no single country can use its might to cause any disturbance in the smooth flow of trade in the sea lanes of the Pacific. The Quad in its meeting did not mention China. But, the US, India, Japan and Australia all share concerns about China’s aggression in Pacific waters.

“They agreed that a free, open, prosperous and inclusive Indo-Pacific region serves the long-term interests of all countries in the region and of the world at large. The officials also exchanged views on addressing common challenges of terrorism and proliferation linkages impacting the region as well as on enhancing connectivity,” MEA spokesman Raveesh Kumar said after the summit.

China, too, unlike the previous occasion, reacted maturely. China’s foreign office spokesman Geng Shuang, when questioned on the meeting during his weekly news conference, said: “The relevant proposals should be open and inclusive and should be conducive to win-win cooperation and avoid politicising or excluding the relevant parties.” He wondered why China was excluded. He also hoped that the move by the four countries was not “directed against it”.

Though no one says it, the move is directed against China to contain its recent aggressive stand in the Pacific. China has disputes with Japan, the Philippines, Vietnam and even Brunei over islets and coral reefs in the Pacific. Former US President Obama’s Pivot to Asia was to reassure East Asian allies that the US was not abandoning the region. With the war in Afghanistan and Iraq preoccupying the US, it seemed for a while that it would leave the Pacific to its fate. But China’s aggressive championing of its territorial claims and its growing economic and military might led to a rethink of that policy.

The idea of countering China with another major Asian power has been talked about in the US since the time of George Bush. The Bush administration which had signed the landmark Indo-US civil nuclear deal was keen on using India to counter China in the region. The stage was all set for India to take off.

However, the UPA government was cautious about taking the plunge. Modi is far more decisive and keen to take the US offer and play a significant role in the region.

The Trump-Modi meeting in Washington earlier in the year set the ball rolling. Subsequent visits by Defence Secretary Jim Mattis and Secretary of State Rex Tillerson took the move forward. Like Bush and Obama before him, Trump wants to help India’s rise. Unlike its predecessors, the Trump White House is declaring this publicly at every opportunity. The announcement of a new Afghanistan policy, which takes a holistic view of South Asia, also has a well-defined role for India there. In short, Modi and Trump are willing to play ball.

NOT A DEFENCE PACT

However, this does not mean that the Quad will convert itself into a defence pact somewhat on the lines of NATO. The idea for now is to have a co-operative arrangement for the defence of the Asia-Pacific and Indian Ocean regions, which is now increasingly dominated by China.

“The Quad is not a defence pact; it is more like an insurance policy for India,” said Lalit Mansingh, a former foreign secretary and ambassador. “If China gets really aggressive in future, the Quad will be the first line of defence. America will also help India build its maritime capabilities so that it will be in a better position to look after its interests. This arrangement will also discourage China from becoming over-ambitious in the Indo-Pacific area.”

All four countries that make up the arch of democracy also have major trade ties with China. None of them, including the US, will be willing to jeopardise their thriving economic and trade links with China.

Trump’s billionaire friends with huge investments in China would be the first to resist a major downturn in ties with Beijing. Unless Chinese President Xi Jinping does something completely out of character and goes to war over territorial claims on the South China Sea or the eastern Pacific waters, a military alliance to thwart China is unlikely. However, joint patrols and more naval exercises among the four nations will be the order of the day. But this is not to say that such a defence alliance will not happen in future. It may or may not. For the time being, it will be confined to a show of strength to send the message that China cannot be the neighbourhood bully.

The Trump administration is now referring to the Asia-Pacific region as Indo-Pacific to include India and the Indian Ocean in its ambit. US officials earlier said the new term “Indo-Pacific” is to emphasise the importance of the rise of India, an important Asian country. The message conveyed to China is that the Asia-Pacific extends beyond China to include the other major Asian power. “We talk about ‘Indo-Pacific’ in part because that phrase captures the importance of India’s rise,” a US official was quoted as saying in Washington.

Does this mean that India is now totally in the US camp? Not really. New Delhi has a foot in both camps. Next month, the foreign ministers of India, China and Russia are meeting for a BRICS do. Delhi is also part of BRICS, the Brazil-Russia-India-China and South Africa grouping.

BRICS already has a bank which hopes to be an alternative to the US-dominated World Bank. So, India, like all other countries today, is not hide-bound in its commitment.