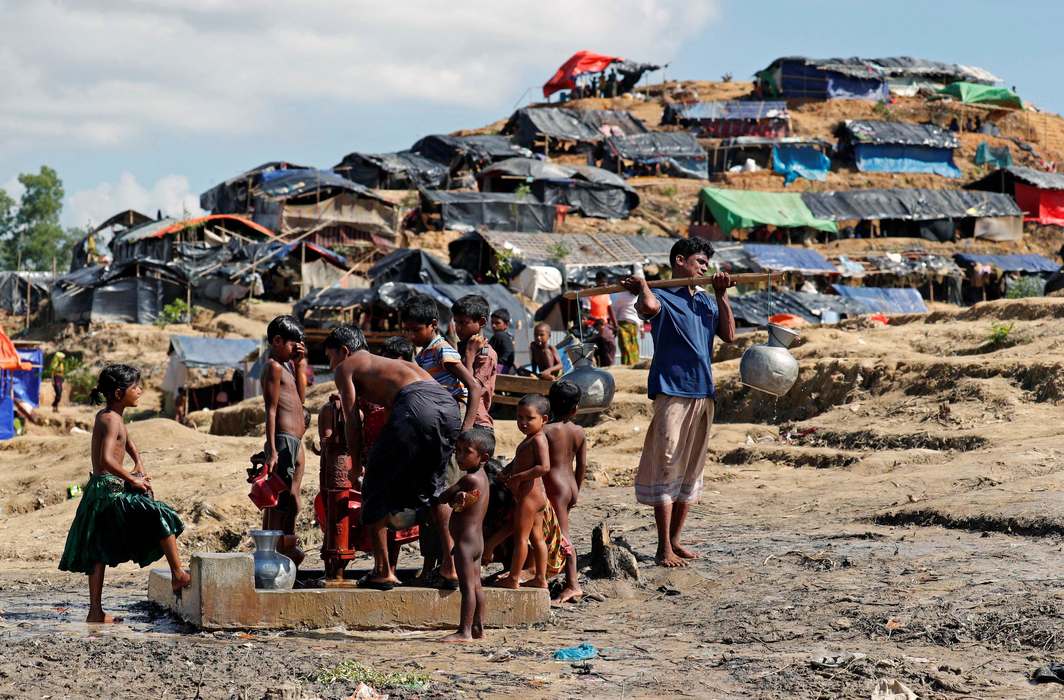 Above: Rohingya refugees collect water at a camp in Cox’s Bazar, Bangladesh/Photo: UNI

For the Rohingyas, the largely Muslim community living as stateless people in Myanmar for centuries and who have been facing rights abuses in their country of birth, there is hope yet. With the International Court of Justice (ICJ), the highest UN court and the International Criminal Court (ICC) approving a full investigation into Myanmar’s alleged crimes committed by the Myanmar military, the persecuted community now feels justice may not be long in coming.

The case will be the first international legal attempt to bring a nation (Myanmar) to justice over allegations of crime against the Rohingyas, concerning an issue to which it is not directly a party. The Hague-based International Court of Justice, set up in 1945 to probe war crimes, authorised its prosecutors to launch an investigation into the persecution of the Rohingyas. An Argentinian rights group has separately filed a law suit over the Rohingyas, in which Myanmar’s icon and Nobel laureate Aung San Suu Kyi is personally named.

The ICJ will hold a public hearing from the second week of December. The hearings will be devoted to the request for the involvement of provisional measures submitted by Gambia.

Leaders of the persecuted community who fled their country to take shelter in neighbouring Bangladesh feel the step will put pressure on Myanmar to grant them their rightful demands for citizenship rights. The ICC approved a full investigation into Myanmar’s alleged crimes against the Rohingyas.

Since August 2017, some 75,00,00 Rohingyas have fled a brutal military campaign and taken shelter in an unwilling Bangladesh where they are treated as “unwanted guests”, who will never return home. “The ICC decision marks an important step in the fight for justice and accountability in Myanmar and sends a strong message to the orchestrators of atrocities that their days of impunity are numbered,” said Nicholas Beguine, Amnesty International Director for Asia.

Rohingyas were denied citizenship rights by the Buddhist-dominated Myanmar’s citizenship law of 1982. Since then, they have been denied basic rights, including freedom of movement, health services and government jobs. The Myanmar army, for the past four decades, has been harassing the Rohingyas in Myanmar’s Rakhine state, and according to the Ontario-based International Development Agency, over 24,000 were killed and thousands raped by the Myanmar security guards.

The United Nations termed the atrocities on the Rohingyas a classic example of ethnic cleansing, but no concrete action against Myanmar was taken and it was allowed to commit serious violations, including war crimes against civilians in Rakhine, Kachin and Shan states where the Rohingyas are located.

The UN in October this year adopted a resolution on the situation of the human rights of Rohingyas and other minorities but prior to that, the UN Security Council took no concrete action against Myanmar mainly because of opposition from China and Russia.

Even India has given a lukewarm response to the whole situation though Myanmar is a neighbour. The UN adopted the resolution on the situation of the human rights of the Rohingyas at the 74th UN General Assembly. It was tabled by the UAE and Finland on behalf of the Organisation of Islamic Cooperation (OIC) and it received 140 votes in its favour and nine against. The support of the UN resolution will certainly help in ensuring protection to the displaced Rohingyas.

Myanmar first refused to cooperate with the ICC investigation, stating that it was not a party to the Rome Statute. But it is a member of the ICC which can carry out the investigation as Bangladesh, a party to the Rome Statute, agreed to cooperate with it. While the ICC can hold an individual, not a state, responsible for the crimes against Rohingyas, the ICJ can hold Myanmar responsible.

Myanmar is now facing a barrage of legal challenges globally in an attempt to make it responsible for its involvement in the alleged genocide against its own people.

Both Gambia, the tiny African nation that filed a case on behalf of the 57-nation OIC and Myanmar are signatories to the 1948 UN genocide convention. It prohibits states from committing genocide, and compels signatories to prevent and punish all cases of genocide. A rights group in Argentina also filed a case against Myanmar military officers and Suu Kyi. Argentinean law permits taking up issues related to other countries that involve rights violations.

Argentinean lawyer Tomas Ojea has taken up the issue under the principle of “universal jurisdiction”, a legal concept enshrined in many countries, including his own. He sought criminal sanction against the perpetrators and accomplices of the genocide. Ojea’s suit demands that, apart from Suu Kyi, army chief Min Hlaing should be brought to justice over the “existential threat” faced by the Muslim Rohingyas.

Various organisations supporting the cause of the Rohingyas are taking up the issue and are likely to go with individual petitions. Param Preet Singh, associate director of the International Justice Programme of Human Rights Watch hopes that the ICC’s approval of investigation will give Rohingyas renewed hope. “The architects of the brutal scorched earth campaign against them may one day be held to account,” said Singh. Dhaka-based rights activist Noor Khan Liton said Bangladesh has been footing a heavy bill, giving the refugees food and shelter, and hopes to get justice.

Facing a dilemma, Suu Kyi has decided to appear before the ICJ to defend herself. Suu Kyi, who is the state counsel of Myanmar, will lead a team to defend the national interest of Myanmar. She has taken the decision after consulting the military generals and will defend her country against accusations of genocide and argue that she was never involved in human rights violations. She has said that she will face “the law suit all by herself”.

Clearly, international legal history is in the making.