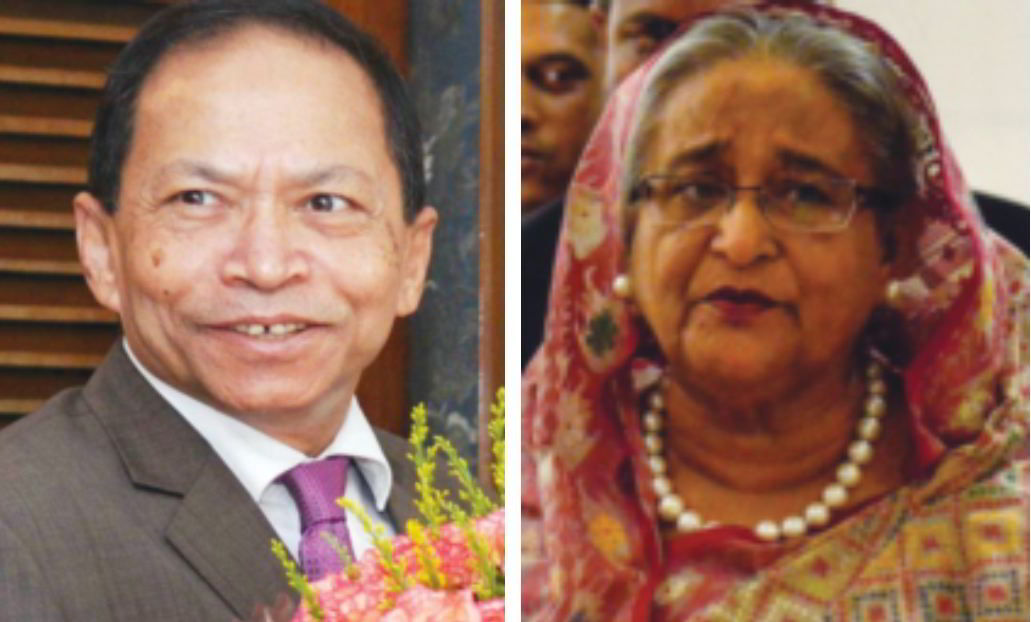 Above: (Left) Bangladesh’s Chief Justice Surendra Sinha and PM Sheikh Hasina are at loggerheads over the balance of power between the judiciary and the legislature

The Bangladesh judiciary is in turmoil. In a rather startling move, its Hindu Chief Justice, Surendra Kumar Sinha, has gone on leave, leaving many unanswered questions. While the purported reason for the leave was health grounds, lawyers have termed it as “forced leave”.

However, the Sheikh Hasina government has repeatedly tried to project this as a “normal” event, with law minister Anishul Huq even displaying Justice Sinha’s letter to the President informing him about his leave. But rumours abound that his leave was linked to the scrapping of the 16th Amendment to the constitution in July this year.

This Amendment was passed on September 17, 2014 and empowered the parliament to remove judges of the Supreme Court for incompetence or misconduct based on a two-thirds majority. The Amendment harked back to the first constitution, drawn up in 1972, which bestowed on MPs the right to impeach judges. With the scrapping of this amendment, parliament no longer has the power to impeach judges of the Supreme Court. This is believed to have irked the government.

In fact, a seven-member bench of the Appellate Division, led by Chief Justice Sinha, had upheld a High Court judgment that had scrapped the amendment. “From now on, the Supreme Judicial Council will deal with the impeachment matters, not parliament,” Manzill Murshid, one of the petitioners against the amendment, had told reporters after the verdict.

Hasina said then that she doubted whether other judges of the Appellate Division had the scope of freely giving their opinions. She said: “The Chief Justice might have not given them that scope.” She said there were many irreverent issues in the verdict. “Those should be placed before the nation because those mislead the nation. With this, no one can get justice.”

Attorney General Mahbubey Alam too had expressed frustration over this verdict, and said the Supreme Judicial Council had been scrapped by parliament and could not be restored automatically. He had said: “We will have a discussion with the Ministry of Law, Justice and Parliamentary Affairs to see if a review plea can be filed.”

Leaders of the ruling Awami League then started accusing Chief Justice Sinha of insulting the Father of the Nation, Sheikh Mujibur Rahman. They said he was being political and pro-Pakistani. Awami League leader Hasan Mehmud even alleged that the chief justice was made a judge only because he was from the Hindu community and he was certainly not nominated on merit alone.

Matters have finally come to a head now as the chief justice has proceeded on leave. Some ministers have openly said that he would be forced to leave the country. The Supreme Court Bar Association president, Zainul Abedin, has alleged that the chief justice was put under “huge pressure” to go on leave. Abedin is also vice-chairman of the main opposition Bangladesh Nationalist Party. “The nation knows and people around the world know that a particular political party and the government put pressure on the chief justice in different ways following a verdict. And his going on leave was part of the pressure that was exerted on him,” said Abedin.

Even lawyers are divided over this issue. While some say it was wrong to enact the 16th Amendment, pro-government lawyers hold Chief Justice Sinha responsible for scrapping this law.

They had started boycotting all his programmes. Some leaders have even alleged that he was hatching conspiracies against the government. But there is no evidence of that.

Huq tried to clear the air by saying that Sinha would continue to perform his duties till he retires on February 1 next year. Chief Justice Sinha, it is believed, has left for Australia to join his daughter there and there is speculation that he might submit his resignation from there. Many feel this would be an undignified exit for a chief justice.

He also played a vital role in settling the Bangabandhu killing case appeal and ensuring the trial of the war criminals. After Pakistan’s Supreme Court gave a verdict against Prime Minister Nawaz Sharif, Chief Justice Sinha had said that compared to that Supreme Court, the Bangladesh one was restrained. This statement added fuel to fire and Hasina openly said he should have resigned before making such remarks. “It is disgraceful that Bangladesh has been compared with Pakistan. This is not tolerable at all,” she had said. “Why should Bangladesh be compared with Pakistan? There’ll be no use giving me such a threat,” she had said in a public speech.

There were run-ins between both. Hasina had even cited the Supreme Court’s observations that “MPs are criminals” and there are “businessmen” in parliament. She said: “Doing business isn’t a sin. What’s the problem if any businessman becomes an MP?”

Chief Justice Sinha has stood like a rock against the government and is considered to be a person of high integrity and fearless. However, it is unlikely he will be sacked by the government as the process of impeachment is tedious and would not bring any political benefit to the Awami League when the elections take place in 2018.

As the battle gets acrimonious, the chief justice seems to be fighting a lonely battle, said Afsan Choudhry, a respected political observer. “The 16th amendment verdict was deeply resented by the legislature and several legal and not-so-legal statements were made by the government. These were on the points of law and constitutional history and since they involved the issue of parliament’s power to remove a judge, the matter was not a public one. The MPs said it damaged the power of the public representatives to remove an appointed judge, which in effect, meant loss of people’s power.”