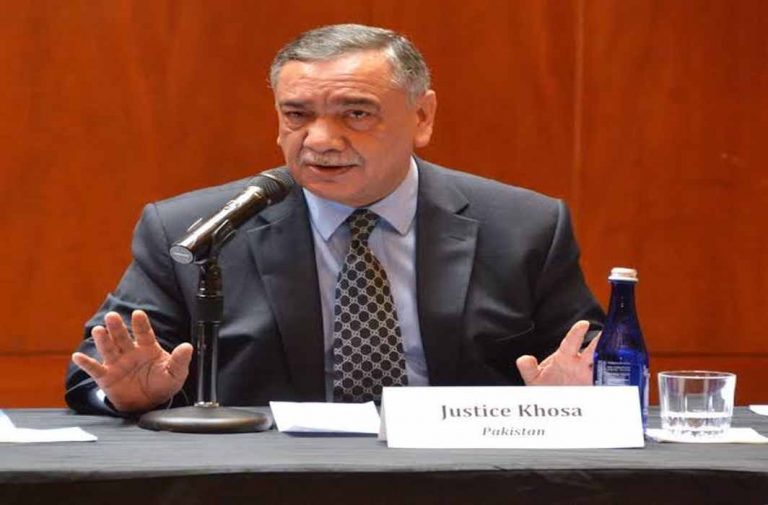 Above: The Pakistan chief justice introduced a new phrase, “judicial restraint”, while granting a conditional extension to General Bajwa/Photo: www.pakistantoday.com.pk

While some have hailed the chief justice’s Asif Saeed Khosa move to reduce General Qamar Javed Bajwa’s tenure extension, others say he has merely thrown the ball in the parliament’s court

Pakistan Chief Justice Asif Saeed Khosa made history in his country by taking on the army chief. In this way, he has exposed how successive governments did not dare touch the rules governing the armed forces.

After three days of intense drama pertaining to the extension of the tenure of Chief of the Army Staff Gen Qamar Javed Bajwa, Justice Khosa, who is well-read in the English classics, introduced a new phrase, “judicial restraint” (replacing the doctrine of necessity), while granting a conditional extension of six months to General Bajwa. He also exposed serious lacunae in the Pakistan Constitution and Pakistan Army Act, 1952, regarding appointment, extension and service rules of the army chief.

Justice Khosa’s act evoked mixed reaction from the legal fraternity. Some said that when it came to the military establishment, even Pakistan’s highest court wore kid gloves. They said that the issue before the three-member bench of the apex court was to validate or deny the extension given to General Bajwa. While admitting a petition filed by one Riaz Hanif Rahi who challenged the extension, Justice Khosa had initially suspended it.

One of the reactions was from Babar Sattar, a prominent Supreme Court lawyer, who in a series of tweets said: “SC’s order today hasn’t diminished but bolstered perception of legal exceptionalism that attaches to Army Chief: SC could’ve ruled his reappointment legal/ valid or illegal/invalid but not that opportunity be afforded to validate an invalid appointment in larger national interest.” While questioning the apex court’s order that extension is subject to legislation in parliament, Sattar asked: “How can SC direct parliament to legislate on any issue (much less to validate extension of an individual)? Also, under what principle must Army Chief’s term be specified by Parliament (& not subsidiary legislation/rules) as terms of office are defined by rules under many laws.” He concluded that the chief justice may have entrenched the perception he set out to dispel that the same treatment is not meted out to the weak and the powerful under law. “This sorry episode has made everyone in PK (especially those sitting atop big institutions) look small & desperate for power & survival. So what’s new?” Sattar wondered.

Matiullah Jan, one of the fiercest critics of the military establishment, said he was surprised that the Supreme Court, despite no clear directions in the Constitution and the Army Act, gave a conditional extension of six months to the army chief. It does not matter whether it is for six months or three years because it is without any legal precedent or Constitutional sanction, he said. The only thing the Supreme Court has done is that it has reduced the extension of three years, which was illegally and unconstitutionally granted by the Imran Khan government, to six months and thrown the ball in the court of the parliament to frame rules on this issue, Matiullah added.

Zahid Mukhtar, a senior Lahore-based journalist, told India Legal that it was very courageous on the part of Justice Khosa and his colleagues to take up an issue which was considered “taboo” in Pakistan. “Of course, granting conditional extension may be questioned but Justice Khosa has killed two birds with one stone. For the first time in the history of Pakistan, he has brought to the fore the scope of Article 243 of the Constitution that deals with the command of the armed forces and the appointment and reappointment of the army chief. Prior to this, these rules remained shrouded in secrecy. Second, he has given clear directions to parliament to frame rules and regulations so that in future such problems do not arise and no government can arbitrarily extend the tenure of the army chief. In the past, military dictators from General Ayub Khan to General Zia-ul Haq to General Pervez Musharraf had given extensions to themselves,” he said.

In doing what he did, Justice Khosa also exposed the incompetence of the Imran Khan government. “The case of General Bajwa showed that the present regime can’t even issue a notification. If Justice Khosa had not taken up the petition under public interest, the illegal notification issued by the prime minister would have gone unchallenged. It is well known that such notifications are issued by the president of Pakistan. And the legal team of the government, led by the attorney general and former law minister, made a laughing stock of itself before the Supreme Court. This is a serious indictment of the performance of the government,” he said.

Raza Rumi, a senior analyst, also said: “First, the ineptitude of the Imran Khan-led government was laid bare when the legal and administrative process adopted while extending General Bajwa’s tenure was presented before the Court. Simple procedures had been by­passed and it was nothing short of a botch-up. The ad hocism on display should worry the prime minister. It is clear that his choice of ministers and bureaucrats is flawed and the manner in which he has been approving important appointments is further undermining the already diminished image of his government. Why was the prime minister’s legal team so clueless? Even his trusted president wasn’t aware of a decision taken by the prime minister’s office especially when the former’s assent—even if tokenistic—is a requirement?”

Mohammed Rizwan, a Toronto-based journalist of Pakistani origin, and a fellow at Pragmora Institute, Canada, told India Legal that the record of the Pakistan judiciary is not so illustrious that it can be defended. The assertion that today’s judiciary is different from the one before 2009 is a flawed argument, he said. “It was the same Justice Khosa who had dismissed two elected prime ministers with a single stroke of the pen. In this case also, the ideal situation would have been to refuse extension as there is no such provision in the Constitution. However, given the power dynamics and dominance of the military establishment in Pakistan, one must appreciate the three-member bench’s first move to suspend the extension. The move to later grant ‘conditional’ extension should be seen as a civilian institution’s attempt to ‘push back’ the military establishment,” Rizwan said.

However, the most disheartening aspect of this entire episode, he said, was the complete silence from the opposition—the Pakistan Muslim League-Nawaz (PML-N) and the Pakistan People’s Party (PPP)—which always talks about upholding civilian supremacy.

However, the temporary relief to the army chief does not end Imran Khan’s troubles. Mukhtar said the Supreme Court may have averted a constitutional crisis by granting conditional extension to the army chief but it had increased problems for Imran Khan as parliament will now have to legislate on appointment and other issues pertaining to the army chief. “Given Khan’s arrogance and hostile attitude towards the opposition, passing new legislation will be a herculean task for the government. It already has a wafer-thin majority in the National Assembly and in the Senate he does not have even a simple majority,” he said, adding that both the PML-N and PPP had already made it clear that there would be no automatic support to the government.

Recently, during a public event, PPP Chairman Bilawal Bhutto Zardari had cast doubt on the government’s ability. He wondered how those who could not decide even a matter of a notification could develop consensus for a Constitutional amendment for extension of the army chief’s tenure.

As far as the PML-N is concerned, Mukhtar said that with both Nawaz Sharif and younger brother Shahbaz Sharif out of the country, Maryam Nawaz was running the show. According to PML-N sources, Maryam said the party would not help the government unless it contacts them.

Mukhtar further said: “The government must bear in mind that Attorney General Anwar Mansoor Khan has submitted an undertaking to the Supreme Court that Parliament would enact a new law on the matter within six months. For amending the Constitution, the government needs a two-thirds majority in Parliament; otherwise the required legislation would not be possible.”

Already the top leadership of both the parties is in jail on alleged corruption charges and not a single day goes by without Prime Minister Khan saying that more people will be behind bars. Even on matters related to national interest, he has refused to engage with the opposition and does not attend parliamentary committees’ meetings.

“In such a hostile political atmosphere, how Imran Khan will develop a consensus with the opposition is anybody’s guess,” Mukhtar said.

It is common knowledge that Khan came to power with the tacit support of the military establishment and his government’s survival depends on the army’s backing. If the parliament is not able to pass new legislation within six months, General Bajwa’s extension will expire, which Khan can’t afford.

The former cricket captain appears to be on a sticky wicket.