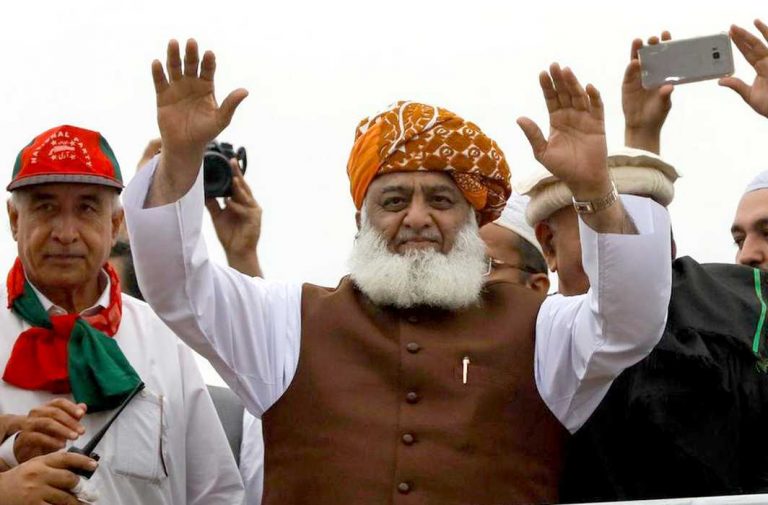 Maulana Fazlur Rehman, the man who has staged a huge protest rally in Islamabad demanding the resignation of Prime Minister Imran Khan, has links with India

Maulana Fazlur Rehman, the man who has brought the Pakistani capital to a standstill by streaming in more than 100,000 people in what he calls “aazadi march” against the “illegal” Imran Khan government, has a strong Indian connection.

However, it was Waliullah’s son, Shah Abdul Aziz Dehlawi, who issued an edict calling for complete independence. It was this struggle for freedom that brought the JUH into the mainstream. It took part in the Khilafat Movement launched by Mahatma Gandhi and later developed close ties with the Indian National Congress and this relationship still continues. The JUH, despite being a party of Islamic scholars, always had a nationalist outlook and was opposed to Partition. This is the reason why there was a split in the party in 1945 when one of its leaders, Maulana Azad Subhani, wanted JUH to become the religious wing of the Muslim League. The party he created was called the Jamiat Ulema-e-Islam. After Partition, the JUH members in Pakistan were viewed with suspicion and called “Congressi mullahs”.

Realising that Pakistan was now a reality, the then amir (president) of JUH, Maulana Hussain Ahmad Madani, in 1952 revoked the membership of senior leaders of the JUH in Pakistan, saying: “Now Pakistan is a reality. You should accept [this] and this is now your country.”

The former members of the JUH decided to form a new party, adopting the name of the party which was created by Subhani in 1946—Jamiat Ulema-e-Islam. Maulana Ahmad Ali Lahori was its first amir (president) and his deputy was Maulana Mufti Mahmood, father of Fazlur Rehman. Despite going their separate ways, leaders of both parties have a close relationship because both follow what is called the Deoband school of thought (Islamic jurisprudence).

This is the reason why Fazlur Rehman visited India in 2003, at the invitation of Maulana Asad Madani, the then president of the JUH. Many eyebrows were raised at his visit during which he also called on the then prime minister, Atal Behari Vajpayee, and visited Darul Uloom Deoband. However, the JUH defended it, saying that his visit was aimed at creating peace between the two countries. Mohammed Rizwan, senior Pakistan analyst, said: “I remember, long ago, the Jamiat Ulema-e-Islam had organised some function in which leaders of the Jamiat Ulema-e-Hind were also invited but what created a flutter is that they were given a guard of honour.”

Whatever the religious connotations, the Maulana’s march to Islamabad is the biggest test that Imran Khan has faced. He has already said he will consider all the demands except the one relating to his resignation as prime minister.

Of course, the Maulana also knows that the stand-off will not result in the fall of the government but he has achieved his main objective of making himself relevant again in the politics of Pakistan.

At the same time, he has given a severe jolt to the Imran government and more importantly his backers the military establishment.