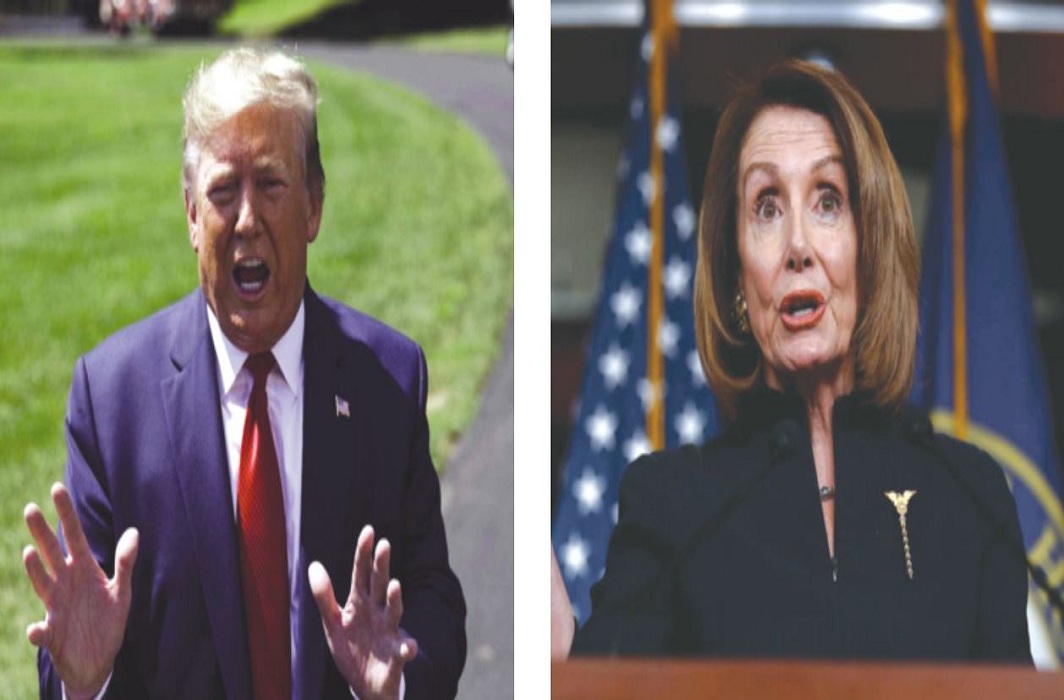 Above: Speaker Nancy Pelosi (right) has launched an impeachment inquiry against Trump/Photos: UNI

The US president’s alleged call to his counterpart in Ukraine to probe his rival, Joe Biden, has led to calls for his impeachment

President Donald Trump’s demand that the Ukrainian president find political dirt on a possible election opponent has set off a battle that might bring what the Mueller Report into Russian meddling in the 2016 election failed to do—impeachment.

Several years of watching the president break protocol, demean opponents on television and Twitter, and generally behave as if he was a company boss and not the leader of a democracy, made the Congress look impotent.

The leader of the House of Representatives in USA, Democrat Nancy Pelosi, abandoned her cautious approach and has set in motion hearings aimed at impeachment. A Trump tweet said: “Can you imagine that!” However, many lawmakers, including some Republicans previously afraid to speak out against their president seemed almost relieved. The mood in America on both sides of the issue is grim.

An intelligence agency official filed a whistleblower complaint about what might have been said in a Trump phone conversation with Ukrainian President Volodymyr Zelensky. The agency’s Inspector General (IG) classified it as serious, so by law that complaint had to be given to Congress. However, the Justice department created a new legal rationale enabling the intelligence leadership to avoid providing it. Of course, as this leaked out to the news media, a political frenzy erupted. However, most Republicans in Congress sat mute.

Under US governmental regulations, a staff person who complains in writing to the IG of an agency about a perceived violation of regulations is called a whistleblower. The IG’s office is theoretically non-partisan with responsibility to the law and the operating procedures, and not to any political leadership.

When Democrats won control of the House of Representatives in the November 2018 elections, they gained control of investigations. The combative and mercurial president no longer can be dismissive of the other political party. Trump’s team successfully muddled the meaning of the complicated Mueller Report’s findings into Russian assistance to Trump in the 2016 election. With it seemingly irrelevant, Trump’s behaviour was emboldened in the past six months.

Trump’s fascination with television means he plays everything episodically. First, he denied there was anything to the whistleblower complaint; “just partisan politics,” he said. Then, he claimed his conversation with Zelensky was about corruption, failing to mention that he had accused former Vice-President Biden of corruption. Trump admitted he had ordered Congressionally approved military aid to Ukraine suspended. If it wasn’t a direct threat it sure sounds like one.

“This would be, I think, the most profound violation of the presidential oath of office, certainly during this presidency, which says a lot,” said Representative Adam B Schiff of California, the Democratic Chairman of the House Intelligence Committee. “There is no privilege that covers corruption.” This is almost identical to the behaviour, denied by Trump, at the core of the Russia investigation—seeking a foreign government’s help in a US election. Then he was a candidate. It is different when you have sworn to uphold the law and the Constitution. Therefore, it was no surprise that Trump’s UN speech was met with painful silence for the most part by global leaders.

Just a few hours after that lacklustre speech, Trump watched Nancy Pelosi on television saying his conduct revealed a “betrayal of his oath of office, betrayal of our national security and betrayal of the integrity of our elections.” Trump retorted via twitter: “Such an important day at the United Nations, so much work and so much success, and the Democrats purposely had to ruin and demean it with more breaking news Witch Hunt garbage. So bad for our Country! PRESIDENTIAL HARASSMENT!”