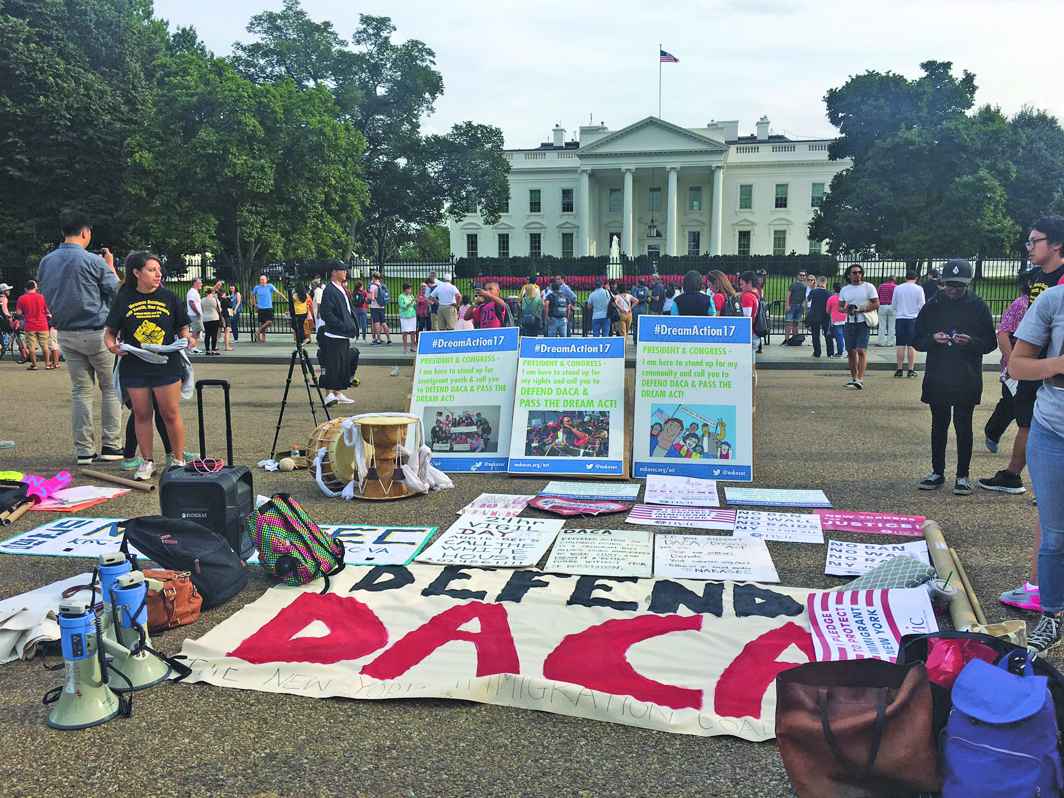 Above: With the fear of deportation hanging over their heads, everyone is in limbo. Photo: Twitter

The arbitrary repeal of the Deferred Action for Childhood Arrivals by Trump has thrown into disarray and despair close to eight lakh young people, called Dreamers, who suddenly face deportation. What is the way out?

In an era of limited knowledge amplified by short attention spans in America, if not globally, it is still possible to be alarmed by President Donald Trumps’s seemingly callous disregard of 8,00,000 young people raised in America since early childhood, but without a legal basis for being here.

These are not bad hombres who brought themselves here. Their parents brought them. Many have younger siblings who can stay because, born here, makes them American citizens.

Former President Barack Obama, largely silent since the election, spoke out strongly saying: “Let’s be clear: the action taken today isn’t required legally. It’s a political decision, and a moral question. Whatever concerns or complaints Americans may have about immigration in general, we shouldn’t threaten the future of this group of young people who are here through no fault of their own, who pose no threat, who are not taking away anything from the rest of us.

“They are that pitcher on our kid’s softball team, that first responder who helps out his community after a disaster, that cadet in ROTC who wants nothing more than to wear the uniform of the country that gave him a chance. Kicking them out won’t lower the unemployment rate, or lighten anyone’s taxes, or raise anybody’s wages.”

A significant percentage of those impacted are Hispanic. Concepcion Solis was at work when US attorney general Jeff Sessions explained why she was unwelcome in Oakland, California or anywhere in the US. For Solis, it may mean a future without her well-paid job at an insurance company. “My work permit expires next September, so I have until then,” the 30-year-old Deferred Action for Childhood Arrivals (DACA) recipient said. “I need to work as much as I can right now and save as much money as I can.” Among Solis’ most pressing concerns is the fact that she provided the federal government with extensive information about herself in order to receive DACA in the first place. This immigration policy, founded by the Obama administration in June 2012, allows certain illegal immigrants who entered the US as minors, to receive a two-year grace period from deportation. They are often called Dreamers. “Immigration has my address,” she said. “So come September what is going to happen? I can’t stay there, but where am I going to go?”

This writer remembers accidentally overstaying a visa in India in 2000 and a visa officer saying: “You can’t stay and you can’t leave.” The intercession of then Deputy Prime Minister LK Advani solved it. For DACA dreamers, the antidote to this typically Trumpian behavior is more likely in the courts than in the Congress. Why? This is because this White House blusters to its base first and researches issues later. 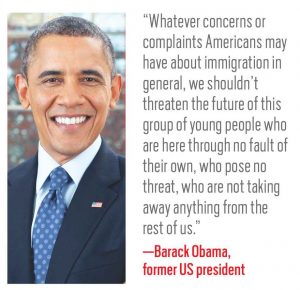 As to the Congress, this is what Mark Twain, the American humorist wrote as a Washington reporter: “I reported on the inmates there. I had never seen a body of men with tongues so handy and information so uncertain.” That criticism was leveled 125 years ago and still seems appropriate.

Relief, albeit temporary, may come because the decision is being implemented in a way that appears to violate the Administrative Procedure Act, and the courts might well block the Trump administration’s action on those grounds.

Politico magazine points out that the Administrative Procedure Act, sometimes called the “Magna Carta of administrative law,” is a 1946 statute that governs hundreds of federal agencies, including the Department of Homeland Security. It requires that agencies go through a process known as “notice and comment” before issuing, amending or repealing “substantive rules”. As part of that process, the agency must publish proposed actions in the Federal Register and then give the public at least 30 days to submit feedback. When it finalizes its proposal, the agency must respond to issues raised by the public comments and must explain why it settled upon the course of action that it chose. The explanation must show why the agency’s action is reasonable and not “arbitrary” or “capricious”.

However, an administration struggling with unprecedentedly low approval ratings (below 35 percent), an inability to undo key aspects of President  Obama’s healthcare plan, stymied by courts on banning Muslims from visiting  because they are Muslim, facing huge opposition on the Wall with Mexico and now in a slanging match with a Korean dictator over nuclear bombs, has to do something.

WHEN RATINGS ARE LOW

So, this DACA issue, on which Trump sends out his attorney general to do the talking, is the best distraction he can come up with this week. It is a distraction that has victims; victims whom his core supporters think are deserving of this treatment.

The Department of Homeland Security and Immigration Services has a great deal of information where these “dreamers” are living and working because applicants had to provide a lot of paperwork to meet the DACA requirements. These include fingerprints, pictures and addresses (of parents too). Karla Pérez, a dreamer, said: “I’m not so much worried for myself as for my family.”

It is difficult to quantify the dreamer problem in terms of national origin. It is perhaps safe to say that if it actually happens, there will be people from every nation on earth suddenly believing they are strangers in their own land. It is going to be an odd situation when it comes to deportation, because many of these dreamers do not have passports from their parents’ home nation.

In general, the optics of this appear very bad for Republicans in next year’s elections, but if optics are important, you would never know it from this administration. True Trump loyalists like the optics just the way they are.