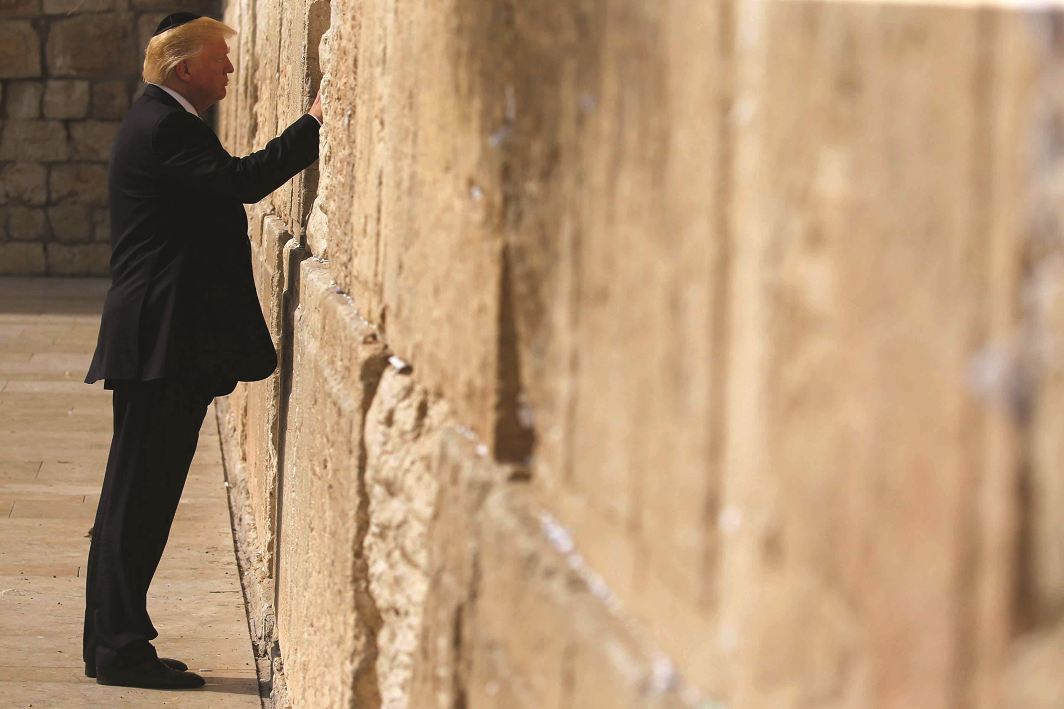 Above: President Trump spends a quiet moment at the Wailing Wall, Jerusalem, in May. Photo: UNI

President Trump’s recognition of Jerusalem as Israel’s capital triggers anger and condemnation across the world. The decision has far-reaching geopolitical consequences, including for India.

On American television late night shows, the joke in the wake of President Trump’s dramatic recognition of Jerusalem as Israel’s capital was that he had finally found his wall. The president’s obsession with building a wall on the Mexican border has provided ample fodder for late night comedy but the latest joke has a macabre element. While global leaders, the Pope and the 57-member Organisation of Islamic Cooperation have reacted in shock and horror and Palestinians return to the streets, the full import of Trump’s decision has created a new definition of The Wailing Wall, Jerusalem’s holiest and most iconic heritage site. It gets its name from the millions of Jews who visited over centuries and shed tears while praying for the city to be rebuilt as Urusalim, or the City of Peace. What Trump has done, in a move avoided by past American presidents, is to destroy any hope of resolving the half century old bitter and bloody feud between Israel and the Palestinians, described as “the world’s most intractable conflict”.

The peace process between Israel and Palestine was a three way dialogue, with America playing honest broker. Trump’s move puts America firmly on the side of Israel, and abandons its role as impartial mediator as defined by the Oslo Accords of 1993. Palestinian President Mahmoud Abbas has declared that Palestinians won’t accept any American role in the Middle East peace process “from now on”. Jerusalem represents deep-rooted cultural, religious and political significance for not just Jews, but Christians and Muslims as well. Territorial status is a divisive factor in the Israel-Palestine conflict and the elusive search for a two state solution. Indeed, if the US moves its embassy to Jerusalem as final acceptance of its status as the capital of Israel, it means overturning an unspoken international agreement that has lasted 70 years. World leaders, including the European Union, the UN Security Council and western democracies considered allies of the US, were united in their condemnation of Trump’s decision which many see as playing to his domestic supporters—the conservative Christian community who see God’s hand in the return of Jews to their biblical homeland. Trump’s announcement triggered a war of words between Turkish President Tayyip Erdogan and Israel Prime Minister Benjamin Netanyahu, straining ties between the two US allies which were restored only last year after a six-year breach that followed the Israeli storming of a Turkish aid ship.

Whatever his compulsions, it reinforces Trump’s image as “The Great Disrupter”, a title he shares with Narendra Modi. While the latter wears it like a badge of honour, Trump’s latest move is in alignment with his proclivity for creating chaos on the global stage as he has done with climate change and global trade. Respected analyst on international affairs Fareed Zakaria had this to say. “It actually achieves little on the ground, all the while offending millions of Palestinians, hundreds of millions of Arabs, and public opinion almost everywhere. When China, your European allies, the Pope, the kings of Saudi Arabia and Jordan all voice strong opposition, it is surely worth questioning the wisdom of the policy.” Last week, an extraordinary meeting of the OIC in Istanbul reflected the anger of the Muslim world over the development, with Erdogan threatening to cut diplomatic ties with Israel over the Jerusalem issue declaring the city’s status a “red line’.’ Historical power centres in the Middle East, such as Saudi Arabia and Egypt, while condemning Trump’s unilateral move, have so far abstained from announcing any radical action. That may be because most Arab countries are too compromised in their relationship with the US to take any effective action. On the ground, the initial phase of violent protests by Palestinian groups has also been sporadic and muted, but that does not in any way dilute the dangers that Trump’s move has exposed, which is not just the Israel-Palestine peace process but world peace.

There are two iconic photos that symbolise India’s dilemma following US President Donald Trump’s unilateral declaration regarding Jerusalem. One shows the late leader of the Palestine Liberation Organisation, Yasser Arafat, embracing Indira Gandhi while in India for a Non-Aligned Conference. The second, taken last July, shows Israeli Prime Minister Benjamin Netanyahu and Indian Prime Minister Narendra Modi strolling barefoot on the banks of the Red Sea with their trousers rolled up. An appropriate caption would have been “BFF”. The PLO is now the Palestine Authority (PA) but the two visuals show the changing diplomatic priorities which have forced New Delhi to show its hand over the Trump decision. India’s bland, two-sentence response to the development indicated the new reality. Much like a bikini, it only drew attention to the concealed parts.

India was, for decades, the strongest supporter of the Palestine cause outside the Arab world. Mahatma Gandhi once wrote: “My sympathies are with the Jews… but my sympathy does not blind me to the requirements of justice… Palestine belongs to the Arabs in the sense that England belongs to the English or France to the French.” From Jawaharlal Nehru onwards, every Indian prime minister has made it a point to openly express support for the Palestine cause. With the centrist Congress Party in power—solidarity with Palestine was an integral part of India’s foreign policy. All that changed in 1992 when real politic overtook morality and led to India establishing full diplomatic relations with Israel.

Israel and India had been maintaining a clandestine relationship much before that, mainly to do with successive Israeli governments supplying India with urgently needed armaments during the war against China in 1962, the war against Pakistan in 1971and the Kargil conflict. Yet, even post-1992, India maintained its position on Palestine and the two-nation theory. Now, clearly the present government, like the one led by AB Vajpayee, sees no need to play coy. Right-wing BJP-led governments have a greater ideological affinity with Israel. During his visit last July, the first by any Indian PM, Modi declined a visit to Ram­allah, the seat of the PA and a customary stop for visiting Indian dignitaries. BJP legislator Subra­manian Swamy has also demanded that India shift its embassy to Jerusalem.

In multilateral or trilateral forums, India continues to pay lip service to the Pales­tine cause. Last week, the foreign ministers of Russia, China, and India said in a joint statement in New Delhi that they con­tinue to back an end to the Israeli-Palestinian conflict through various UN resolutions and the Arab Peace Initiative. The initiative, among other clauses, calls for a full withdrawal by Israel from the occupied territories, including East Jerusalem.

However, India’s relative silence after Trump’s radical move is seen by many observers as a point of departure in the country’s moral support for the Palestinian cause. The fact that Israel is now the second biggest supplier of arms to India, behind Russia, and a major collaborator in India’s fight against Islamic terror—and Pakistan—is one indication of how the balance has tilted. The danger is that an openly pro-Israeli policy by New Delhi invites the threat of antagonising the Muslim world. Last week, Arab envoys met Minister of State for External Affairs MJ Akbar to express “deep concern” over India’s lukewarm stand on Trump’s move and urged New Delhi to “walk the talk”. When ideology trumps morality, there is always a price to pay.

The core of the issue is that Palestinians view East Jerusalem as the capital of their future state. The United Nations Partition Plan of 1947 envisaged Jerusalem as a separate “international city.” Israel declared independence a year later and the resulting war saw the city divided. The armistice border—called the Green Line because it was drawn in green ink—left Israel in control of the western half, and Jordan in control of the eastern half, which included the famous Old City. In 1967, following the Six-Day War, Israel occupied East Jerusalem, a move that was never internationally recognised. Since then, the entire city has been under Israel’s authority—all branches of the Israeli government are located in Jerusalem, including the Knesset (Israel’s parliament), the residences of the Prime Minister and President, and the Supreme Court—but Palestinians, and many in the international community, continue to see East Jerusalem as the capital of a future Palestinian state. 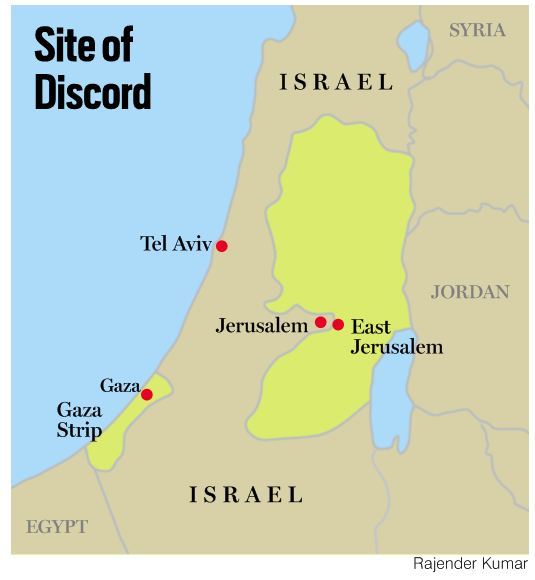 Control of East Jerusalem remains one of the core stumbling blocks to an Israeli-Palestinian peace process, frozen since 2014. Israel’s stand is that the city cannot be divided. Under American prodding (pre-Trump), the peace talks had sporadically restarted and some progress was being made, now wiped out in a presidential soundbite.  In one stroke, Trump has heightened tensions between the US and the Muslim world, between the US and its allies as well as power hitters like Russia and China. Ultimately, it raises the threat of terrorism towards the US and its allies by another notch. There are some who remain optimistic. Ian Black, author of Enemies and Neighbors: Arabs and Jews in Palestine and Israel, 1917-2017, says that “there are signs that the appetite for a third intifada is waning. There is weariness and exhaustion. An uprising now will not help improve conditions in Gaza”. The antagonism between the two Palestinian groups—Hamas and Fatah—who have ruled the occupied Palestinian territories of the Gaza Strip and the West Bank respectively, also rules out a unified response. Most observers, however, agree that in recognising Jerusalem as Israel’s capital, Trump seeks to achieve through a declaration what Israel has been trying to do for 50 years through force of arms: to erase Pales­tin­ians, as a political and cultural presence, from the life of their own city. The Pale­stinian residents of Jerusalem are al­ready subject to municipal discrimination at every level, and a creeping pro­cess of ethnic cleansing despite the fact that they make up 37 percent of Jeru­salem’s population of 866,000. Trump’s decision only enhances their isolation and the discrimination. The US president’s world view and grasp of foreign affairs has come under frequent question and criticism but his latest move is one that has negative global ramifications and wipes out decades of careful, nuanced international diplomacy. There is a law, passed by the US Congress in 1995, requiring America to move the embassy from Tel Aviv to Jerusalem but every president since then—Bill Clinton, George Bush and Barack Obama—have abstained, citing national security interests. Every six months the presidential waiver has been used to circumvent the embassy move. Trump has chosen to ignore history—and common sense.