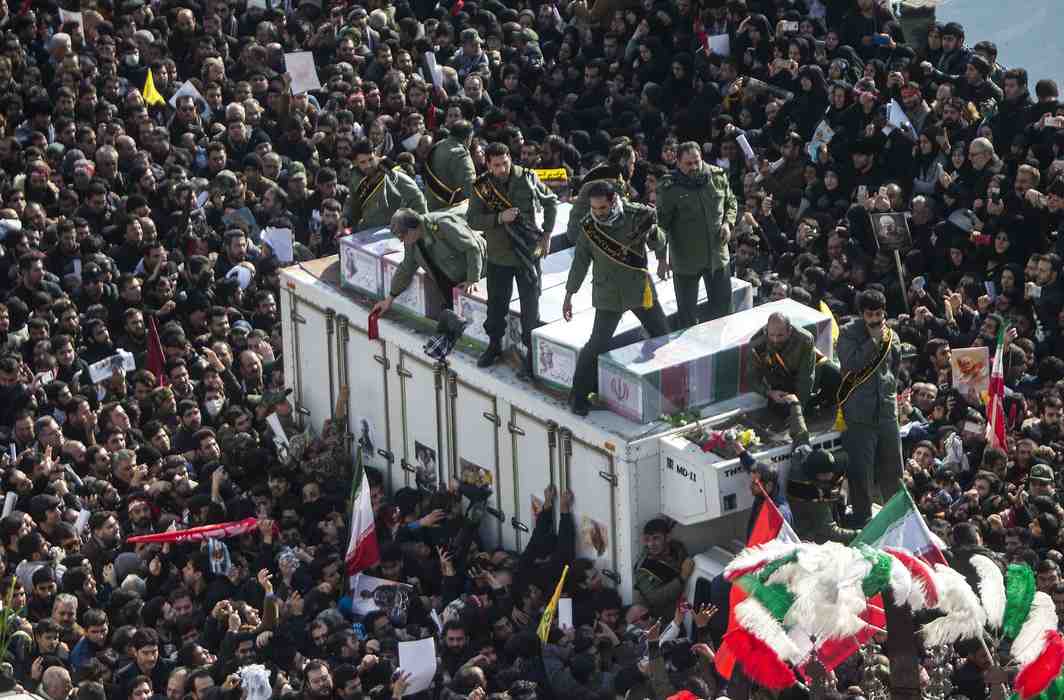 Though Iran and the US have stepped back from the brink of war, the situation is volatile. India is watching the situation closely due to its diaspora in the region and the impact on oil prices

The US drone attack on Iran’s top general, Qassem Soleimani, and Iran’s decision to retaliate by firing ballistic missiles at two American bases in Iraq have raised concerns about an all-out armed conflict which will plunge West Asia into instability. Any conflict in this oil-producing area will have repercussions worldwide, including India.

However, good sense seems to have prevailed for the moment. But how long that will last is uncertain. As speculation grows around the downing of a Ukraine plane in Iran, killing 179 people, one wonders if its militias could have a hand in it. It is not clear yet if Tehran can control them; they had played an important role in getting the IS out of the territory it had carved out in Iraq and Syria. Soleimani was the guiding force behind these militias. They are baying for revenge and may act without consulting the authorities in Tehran. The situation remains volatile and a tiny miscalculation by one side can plunge the region into war. Small rockets hit the Green Zone in Baghdad on January 9 near the American embassy. Luckily, there was no major damage.

For the moment, both Iran and the US have thankfully stepped back from the brink. US President Donald Trump, in an address to Americans on January 8 from the White House, said that the ballistic missile attack on the Erbil air base in northern Iraq and the Al-Asad base in the western part of the country had not led to any loss of American lives. In fact, the Iraqis had warned the US forces and that allowed them to shift to safety before the missiles struck. For a president who likes to project himself as a strong and decisive leader, any American death would have led to massive retaliation.

Iran knows that. According to officials quoted by US newspapers and television channels, Iranians made sure that the damage was minimal. However, Iranian state television claimed that 80 American soldiers were killed. Iran had no option but to strike at US targets after Soleimani was killed while on a visit to Baghdad. Domestic public opinion was enraged at the US strike against the well-loved and powerful general. But the pragmatic Iranian leadership took care not to further escalate an already volatile situation. Iran Supreme Leader Ayatollah Khamenei, speaking in the holy city of Qom, had claimed after the missile attacks: “Last night they received a slap…these military actions are not sufficient…what is important is that the corrupt presence of America in this region comes to an end.’’

However, on January 7, Iranian foreign minister Javad Zarif said that the Islamic Republic does “not seek escalation or war, but will defend ourselves against any aggression’’. Like White House and Pentagon officials, Iran too was playing the soft and hard cards. There have been reports in a section of the US press that the US and Iran have been in touch through a Swiss diplomat and have been talking through the crisis, perhaps to contain the damage or begin bilateral talks. There is no official confirmation of this.

Trump’s nine-minute speech on Iran gave mixed signals to the Iranians. He said Iran was “standing down’’ and sought to reassure Americans that the country was not heading for another war in West Asia. His assertion came even as Democrats were trying to curtail Trump’s powers to wage war. The president did not share his decision to attack Soleimani with Congress, which, according to the US Constitution, should have been done. Trump ended his speech with an unexpected appeal for peace. This was dismissed by Iran’s envoy to the UN, Majid Ravanchi, as “unbelievable’’ after Washington had “initiated a new series of escalation and animosity with Iran’’.

At the heart of the current crisis is Trump’s decision in 2018 to walk away from the nuclear agreement between Iran, US, China, Russia, France, UK and Germany. The 2015 deal, which was signed under President Barack Obama’s administration, was worked out to ensure that Iran stop its nuclear programme in return for lifting all US sanctions slapped on it. A strict inspection regime by the International Atomic Energy Agency (IAEA) in return for lifting the crippling sanctions was worked out. Trump, always critical of the deal, walked out. He was backed by Israel, Saudi Arabia and the UAE, who were vehemently against the agreement from the beginning.

Trump wants to renegotiate the deal and has appealed to China, Russia and others who signed it to begin fresh negotiations. He vowed: “As long as I’m US president, Iran will never have a nuclear weapon.’’ Soon after Soleimani’s death, Iran announced that it would no longer be restrained by the Joint Comprehensive Plan of Action. So far, the government has not kicked out IAEA inspectors who can visit any of Iran’s nuclear facilities. The team sometimes does so three times a month.

Trump had charged the Obama administration with negotiating a bad deal as it allowed Tehran to use/fund a “terror spree’’, including the missiles fired at two US camps in Iraq. Susan Rice, Obama’s national security adviser, denied this and said that it was Trump who began to escalate the situation in Iran by “recklessly and unilaterally” withdrawing from the nuclear deal and imposing “maximum pressure crippling sanctions. She told MSNBC, “And it was in the wake of that that we found ourselves in this escalatory cycle that has led to where we are today—a very dangerous moment.”

The short point is that Trump initiated the problem and by killing Soleimani could plunge the two countries into another meaningless war. America seems to have drawn few lessons from former President George Bush’s decision to go to war with Iraq in 1991.

The consequences of a war between the US and Iran would greatly damage Indian interests. Though India, thanks mainly to US sanctions, stopped buying oil from Iran, any military confrontation would lead to skyrocketing oil prices. Considering India’s fragile economic condition at present, a hike in petroleum products would inflate its oil import bill and damage the economy further.

Though there are few Indian workers in Iran, some 150 families are settled there. In case war breaks out and they need to be evacuated, the numbers are small. The larger concern is the war engulfing the rest of the Gulf states, including Saudi Arabia and the UAE. This is where the majority of India’s nearly nine million workers are spread.

Iran had also reportedly vowed to attack Dubai in the UAE and Haifa in Israel if Iranian soil is bombed. Fear of the fighting spreading would induce many of the Indians to return home. Indian workers in the region send home $40 billion each year. This will reduce drastically if the region remains unstable. India is keeping a close watch on developments. MEA spokesman Raveesh Kumar said that foreign minister S Jaishankar has been talking to all stakeholders, including the UAE, Jordan and Qatar. Earlier, both US Secretary of State Mike Pompeo and Zarif had spoken to Jaishankar.

In the last few years, India has had to constantly balance its traditional ties with Iran with its current all-encompassing relations with the US. It has been a tightrope walk. Yet, despite Washington giving India exemptions from sanctions on Chabahar Port in Iran, the project has been languishing for over a decade. The Port is of strategic importance to India because it gives Delhi access to not just Afghanistan but entire Central Asia. Chabahar was seen as a way to bypass Pakistan, which does not allow India to use its territory for trade. India built the Zaranj-Delaram highway at great cost and the sacrifice of several workers who were attacked by the Taliban. The idea was to send goods to Chabahar Port and then take them to the Iran-Afghanistan border where it would be connected to the rest of the country through this highway. This project is working in spurts, thanks to decades of sanctions against Iran. Unless the situation improves and sanctions are lifted, Chabahar cannot provide the kind of access that India had hoped for.

Zarif is expected to be in Delhi soon. While he had openly spoken to this correspondent in November about his disappointment with India for giving in to US diktats and refusing to lift oil from Iran, he was positive about ties between both countries. Both Delhi and Tehran realise the significance of their ties—Iran because it needs friends and India because Iran is a major oil producer and part of its extended neighbourhood. People to people contacts too run deep.

So India is keeping its fingers crossed as the situation unfolds.

Lead Picture: Top Iranian general Qassem Soleimani’s assassination by the US may plunge West Asia into instability and drag India into the vortex/Photo: UNI