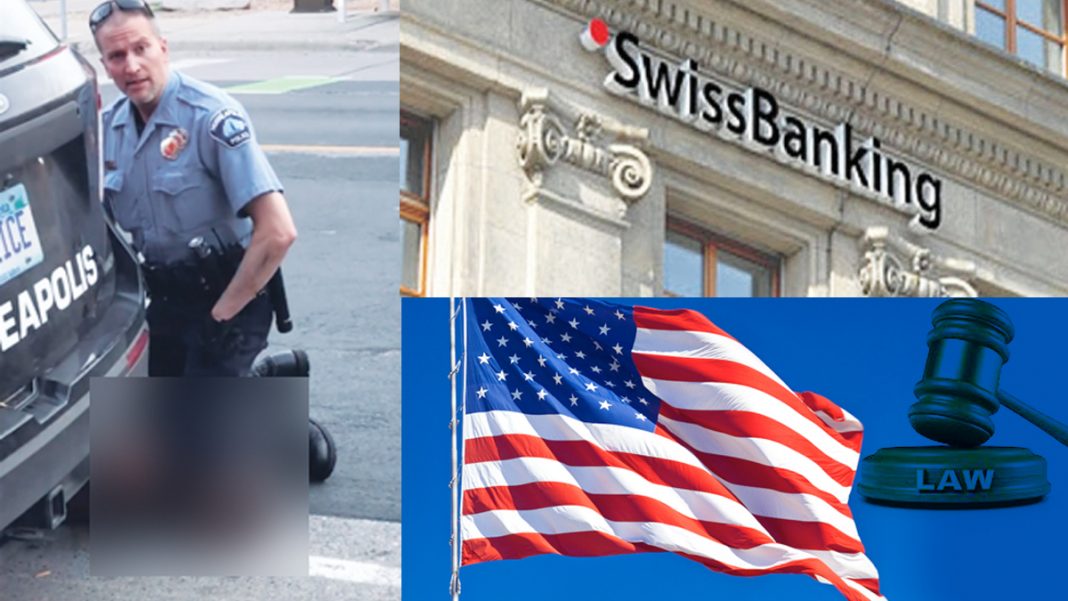 The stiff upper lip of Swiss banking has turned pale under American pressure. Charged with aiding American tax payers hide their income through private, numbered accounts, Zurich’s oldest private bank Rahn+Bodmer (R+B) has agreed to a $22 million settlement. The US charge was of the bank aiding American taxpayers stashing money in offshore accounts, hiding it from the Internal Revenue Service. The was as per an announcement of the Department of Justice (DoJ) and Audrey Strauss, the US Attorney for the Southern District of New York.

American tax payers hid hundreds of millions of dollars in offshore accounts, avoiding tax obligations. As per US prosecutors, defendant Rahn+Bodmer Co. (“R+B”), entered into a “Deferred Prosecution Agreement” with the authorities, under which R+B has admitted to its unlawful conduct and agreed to pay $22 million in restitution, forfeiture, and penalties.

The unfortunate killing of African American George Floyd (46) by a police officer in broad daylight and in front of hordes of shocked people watching and filming the gruesome murder last year, has resulted in $27 million blood money, to be paid by the city of Minneapolis to George Floyd’s family. The family had sued over this so-called custodial death.

Floyd died in May last year as Derek Chauvin, a white police officer, kneeled on his neck for around nine minutes outside a shop in Minneapolis, Minnesota. The transcripts of police bodycam footage at that time had shown that Floyd said more than 20 times he could not breathe as he was restrained by the officers.

Floyd’s dying pleas for help sparked massive outrage in the US. Benjamin Crump, an attorney for the Floyd’s family, has called the agreement largest pre-trial settlement of a wrongful death lawsuit in the country’s history.

Last year, Floyd’s family filed the federal civil rights lawsuit against the city, Chauvin and three other fired officers charged in his death. They said that the police used excessive force against Floyd in violation of his constitutional rights.

The two men who were earlier arrested on Sunday have been charged by the U.S. Justice Department for allegedly pepper-spraying three Capitol Police officers, one of whom later died, during the January 6 assault on Congress by the former US President Donald Trump supporters.

Julian Elie Khater (32) and George Pierre Tanios (39) are facing multiple counts, including assaulting police with a deadly weapon, after investigators said they sprayed at least three officers with an unidentified, but powerful, chemical agent.

One of those officers, Brian Sicknick, was later rushed to a hospital and he died the next day. Reportedly, Khater and Tanios are not charged with killing Sicknick.

More than 300 have been arrested in connection with the January 6 deadly capitol riot. Shortly after the Capitol Police officer died, the Justice Department opened a federal murder probe into Sicknick’s death.

No need for Americans to divest from Xiaomi, says US court

An effort by the Department of Defence to force American citizens to pull out their investments in Chinese smart-phone maker Xiaomi Corp on the grounds that the company shares ties with the China’s military, has come up against a block from a US Federal Judge.

Last year the company had been added to a list of eight other firms to a list that requires Americans to sell their interests in the firms by a stipulated deadline. This was done under instructions from the Trump administration. Earlier this Xiaomi Corp sued the US Defence and Treasury departments and sought a court ruling to reverse the decision.

These restrictions were to come into effect next week. This was also after Lei Jun, the CEO and founder of Xiaomi, received the award of “Outstanding Builder of Socialism with Chinese Characteristics” in 2019 from the Ministry of Industry and Information Technology. The company had earlier completely denied any affiliations with the Chinese military.

U.S. District Judge Rudolph Contreras said that the court “concludes that defendants have not made the case that the national security interests at stake here are compelling.”

In a recent development, the Securities and Exchange Commission (SEC) of the United States has charged a California-based trader for an alleged fraud scheme in which he spread mis-information about a defunct company on Twitter.

The SEC has complaint that in December, last year, Andrew L. Fassari, or @OCMillionaire on Twitter, tweeted false statements about Arcis Resources Corporation shortly after purchasing over 41 million shares of the stock. However, Fassari’s attorney has maintained that he has not done anything wrong.

The SEC blocked trading in Arcis on March 2. As per the SEC, the trader made close to 120 tweets from December 9 to 21 with false and misleading statements about the stock, causing its price to surge over 4,000%. It is alleged that Fassari later sold all his shares between December 10 and 16, booking $929,000 in profits from the scheme.

Did you find apk for android? You can find new Free Android Games and apps.
Share
Facebook
Twitter
Pinterest
WhatsApp
Previous articleDelhi HC seeks response from Centre in The Quint’s challenge to IT Rules
Next articleDelhi court reserves order on Mehmood Pracha plea challenging Delhi Police raids on his office