The result of the election came as a nasty surprise for UK’s PM Theresa May and reduced her Conservative Party’s majority. Will she resign gracefully like Cameron or be pushed out by her party?

June is an unlucky month for the Conservative Party. If the Tories believed in astrology like most Indian politicians, they would have certainly checked with the stars before heading into unnecessary elections. Astrologers would have told them to keep the electorate as far away from the ballot box as possible in June if they wanted to continue with successful political careers.

On the morning of June 24, 2016, Britons woke up to a shock result that even the best political pundits had not predicted—the country had voted to leave the European Union. Brexiteers couldn’t believe they had won and the then prime minister, David Cameron, couldn’t believe he had lost.

Less than a year later, on June 9, 2017, Cameron’s successor, Prime Minister Theresa May, had a similar surprise—voters had again fooled politicians and analysts and delivered a verdict that is being called the “Revenge of the Remainers”. May had won the election but lost her majority in the parliament.

May had inherited a government from Cameron after he had decided to make good on a 2015 election pledge—to hold a referendum on Britain’s membership of the EU. Cameron and May were both Remainers, so when nearly 52 percent of voters backed Brexit, he took responsibility and resigned from prime ministership. He kissed goodbye to his political career at the height of his popularity and at the tender age of 50 accepted it had become untenable to continue.

There is no such gesture from May who had taken an equally foolish decision to hold a snap poll when one wasn’t needed. Riding on a ratings high, May believed she could gain personal legitimacy by winning an election for the Tories. She fought a campaign focusing on herself and how she alone could provide a “strong and stable” government. The opportunism backfired. May had promised to increase the party’s majority by a phenomenal 100 to 150 seats. Instead, they won only 318 of a total 650 seats, reducing their previous tally of 330 and falling short of the magical majority mark of 326.

The knives are out in the Conservative Party and it is very unlikely that May will remain the PM for too long. Former Chancellor of the Exchequer George Osborne, whom May had unceremoniously chucked out of the cabinet the day she took over as PM, has described her as the “dead woman walking”.

A contrite May has bought herself time by accepting full responsibility, although she is still refusing to resign like her predecessor. “I got us into this mess, and I’m going to get us out of it,” May told a packed session of Conservative backbenchers. This new softer side to a woman who had styled herself on Margaret Thatcher, Briton’s Iron Lady and first female prime minister, has won over some critics, albeit temporarily. “I saw an incredibly humble woman who knows what she has to do, and that is be who she is and not what this job had turned her into. She has lost her armadillo shell and we have got a leader back,” said Heidi Allen, MP for South Cambridgeshire.

As for her career, May’s gamble has cut it short. No one loves a loser and there are far too many aspirants for the prime minister’s post in the Tory party, who will be more than happy to bring her down and replace her.

Immediately after the election results came out, Allen had predicted that May would have to step down from the prime ministership within six months. While most Tories are not expecting May to lead them in the next election, they are hoping that if she continues to be more consensual, she might make it till the end of Brexit talks in two years. 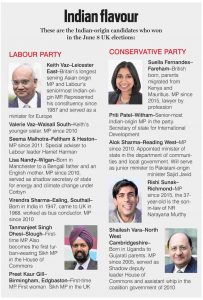 The real winner in all this is the man who lost the election—Jeremy Corbyn, the leader of the Labour Party. Corbyn had been dismissed as a left-wing loser who could not resurrect Labour, let alone win an election even by members of his own party. Despite winning the leadership contest in 2015 with a stunning 59 percent mandate from party members, Corbyn was faced with a revolt from his front benchers within days of taking over. Almost half of the shadow cabinet resigned, refusing to work with him.

Faced with another challenge to his leadership after the Brexit referendum, Corbyn stunned his critics yet again by winning 61 percent of the votes this time.

The Socialist old-timer was put 30 points behind May at the beginning of the election—the reason that the prime minister believed she could win a landslide. The Tories fought a personalized campaign, calling Corbyn all the names under the sun which went against them and gained sympathy for the underdog. Refusing to stoop to his opponents’ level, Corbyn came off as a clean, honest and fair politician who had a vision for the country.

Hailing the “remarkable result” which saw the Labour gain 30 seats, the usually soft-spoken Corbyn declared: “We are now a government in waiting and we must think and act at all times with that in mind.” In the five days after the shock result, 35,000 people joined the Labour Party. The man who was seen as dividing his party had managed to unite the electorate. “We achieved what we did last Thursday (June 8) because we were a united party during the campaign and we need to maintain that unity and collective discipline in the weeks and months ahead,” Corbyn told the Labour MPs after the election. Throwing a challenge at May, the vindicated Corbyn mockingly said he was ready to offer “strong and stable leadership in the national interest” if her coalition of chaos flops.

A much-weakened May is now forced to form a coalition with the socially conservative Democratic Unionist Party of Northern Ireland in order to run her government.

The “hard Brexit” and anti-immigration loner, May will now have to indulge in more consensual politics and listen to not just members of her own party but the opposition too in the Brexit negotiations which are due to start.

As for her career, May’s gamble has cut it short. No one loves a loser and there are far too many aspirants for the prime minister’s post in the Tory party, who will be more than happy to bring her down and replace her. It would do her image some good for her to retire gracefully like Cameron, rather than be pushed out by her party which is bound to happen sooner rather than later.