As a new world order shapes up, Modi will try to be the right man in the right place for Europe and the US. Will his responsive stance give India a chance to play a larger role on the world stage?

Prime Minister Narendra Modi is slated to visit Washington for his first meeting with President Donald Trump at the end of the month. But ahead of the meeting, the pitch has already been queered by Trump’s irresponsible accusations against India.

Will he halt the growing warmth between India and the US?  With Europe now seriously wooing India and the US turning isolationist, the chances for a middling power like India to play a larger role on the world stage has brightened significantly.

As major European allies try to grapple with the new reality of an America no longer willing to carry the burden of a liberal, globalised world, they are looking towards Asian giants, China and India. Modi’s recent four-nation tour to Germany, Spain, Russia and France was a huge success. Much of this can be attributed to the Trump effect.

Modi arrived in Germany soon after Trump rounded off his first overseas tour. The US president attended both the NATO and G-7 summits and left America’s traditional allies uneasy at the new turn of events. Trump lectured NATO members about not paying enough for Europe’s defence and gave no commitment that the US would come to its aid in case of aggression from a non-NATO power (such as Russia). Trump returned to Washington and tweeted against Germany, leaving Chancellor Angela Merkel and other European leaders both heavily nervous and upset.

Modi waded in to cheer Merkel who was hugely disappointed by the new American president. He assured her of India’s abiding ties with Germany and went on to declare that “India and Germany were made for each other’’. A smiling Merkel heard him indulgently.


But Trump had not finished with Europe. He went back to Washington and announced that he would pull out of the Paris Climate Change Agreement. This had been sealed with much fanfare in 2015, when Barack Obama and the Chinese came to an agreement and India decided to fall in line. Candidate Trump had been thundering against the Climate Agreement during his election campaign and his subsequent announcement was on expected lines. Yet it shook Europe to the core. And in his speech announcing America’s exit, Trump mixed fact with fiction. He accused India of signing the climate deal in the hope of cornering billions of dollars for new technology provided by the Obama administration.

The fact is that the US and the rest of the industrialised world are major polluters and had to pay for their past misdeeds in wrecking the environment for decades. India and China began their development much later. Today, China is the main polluter, followed by the US. India is not far behind. The emerging economies had during the several rounds of negotiations that led to the landmark 2015 climate deal insisted that the developed world pay for some of the clean, new technology that is being developed across the globe. Taking this out of context, Trump threw this charge against India.

External Affairs Minister Sushma Swaraj took on Trump during her annual news conference on June 5. In reply to a question, she said: “We did not sign the Paris agreement under pressure from any country, or because we were greedy for funds from some country. We signed it because of our belief: a 5,000-year-old culture of preserving the environment.’’ 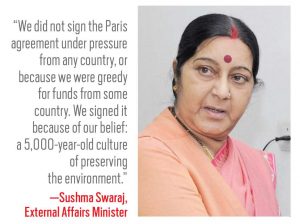 Modi played his climate card well, assuring distraught European leaders that India is willing to go beyond what was promised in the Paris agreement. Standing shoulder-to-shoulder with new French president Emmanuel Macron, Modi declared his faith in the Paris accord. Macron will be visiting India by the end of the year and has endorsed the Modi-led alliance.

India and EU, having struggled since 2007 for a free trade agreement, will now firm up their ties as a nervous EU looks for solid trade partners. After Modi’s visit, both are set to engage with each other even more deeply.

With Russia too, Modi has repaired ties which were going through a bad patch. India was concerned about Russia’s closeness with both China and Pakistan. With Vladimir Putin by his side at a news event in St Petersburg, Modi, without mentioning Pakistan, spoke of the export of terror by certain countries. For the moment, India is sitting pretty. So what’s on the cards are the clearing of doubts with old friend Russia and a bigger engagement with Europe now.

Chinese Prime Minister Li Keqiang was in Berlin a day after Modi. And instead of talk on South China and trade, the focus was on how to make sure that the Paris Agreement does not unravel. While cash-rich China with its increasing clout—economic, military and diplomatic—will be the principle beneficiary of a US retreat from global leadership, for India too, the options have opened out considerably. India may not be in a position to dole out cheques, but it has several advantages for European leaders. On top of the list is India’s democratic credentials. It also has a youthful population and a huge market which every nation is eyeing.

But what about ties with America? Modi has aggressively pursued a pro- US tilt in foreign policy. But the isolationist trend triggered by Trump has made India a tad cautious. That possibly is a good thing as it is best to hedge one’s bet and not put all the eggs in an unpredictable American basket. Sushma Swaraj has said that Indo-US ties are on course and she does not foresee any major change in relations. She is confident that these ties will continue to look up as it is a “relationship of mutual benefit’’. 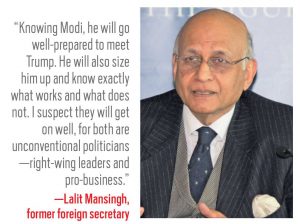 Former foreign secretary Lalit Mansingh, who was also ambassador to the US, was as optimistic as Minister Sushma Swaraj. “India-US relations are set and have a momentum of their own. They can go on without presidential intervention,’’ he said. The US remains India’s largest trading partner. There may be fluctuations in the number of H1B visas and the pharmaceutical sector may face problems in future, but so far, this has not affected ties. Mansingh believes there may be an issue on renewable energy.

But what can override some of the schisms, he believes, is diplomacy. After taking a rampant anti-China stand during the election campaign and even saying that China was a “currency manipulator’’ and “climate change is Chinese propaganda’’, Trump did an about-turn after President Xi Jinping’s visit. The personal chemistry was so good that he had his grandchildren (Ivanka Trump and Jared Kushner’s children) sing Chinese songs for the visiting dignitaries. The anti-China rhetoric flew out of the window. Instead, Trump praised China’s efforts at working with the US to contain North Korea.

India hopes that Trump will use India to balance out China in the Asia-Pacific region. “But chances now are that as the US-China equation will remain strong, he will possibly cut a deal with the Chinese. Already, Japan and South Korea, who are under the US defence umbrella are concerned,’’ said Mansingh.

So where does this leave India? Much will depend on the Modi-Trump meeting and how it pans out. “Knowing Modi, he will go well-prepared to meet Trump. He will also size him up and know exactly what works and what does not,’’ said Mansingh. “I suspect they will get on well, for both are unconventional politicians. Both are right-wing leaders and totally pro-business,’’ he added. “Modi’s diplomacy will be responsive and will be able to adjust to today’s changing environment.’’

Modi has already kept a fallback option in case things take a sour turn with the US. In Europe, both Merkel and Macron are willing to play ball with India.