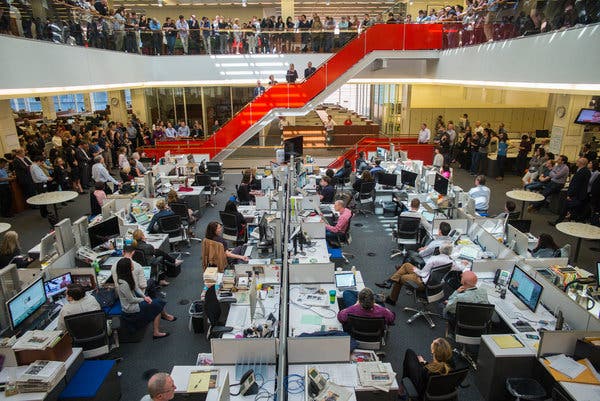 The New York Times has also put curbs on international travel which can now only be cleared by the top boss at the newspaper, and not section editors as was the case earlier. Staff has been told that travel to Asia and Italy is banned till further notice.

Meanwhile, Wall Street Journal staff has been told that the company will be “pulling back on travel to conferences and other discretionary trips”. Publishing giant Condé Nast, which has a large number of employees posted abroad, has asked employees who had visited an affected country to work from home for two weeks. This came after a group of Condé Nast staffers recently travelled to virus-affected Milan in Italy for fashion week.

While all the buzz is around PM Modi giving up his social media accounts to deserving females on Women’s Day, a recently released report shows who are the most followed journalists on Twitter.

The report, compiled by researchers at the University of Michigan, listed three senior journalists with the maximum Twitter following. They are Shekhar Gupta, the founder of the online news platform Print, Rajdeep Sardesai, the consulting editor at India Today and host of Nine O’ Clock prime time news show on the group’s English channel, and his former colleague at NDTV, Barkha Dutt.

The study “plotted” the friends and followers of journalists in India to understand who they most “listened to” on the micro-blogging site.

Among the politicians most followed by Indian journalists, Modi heads the list while historian Ramachandra Guha is the most followed public intellectual.

This is the season for media outlets to host their summits/conclaves while the weather is still bearable. We have just had CNBC-TV18’s India Business Leader Awards in Mumbai on the theme, “Leaders of Change”, with the chief guest being the prime minister along with business leaders, and naturally, Union Finance Minister Nirmala Sitharaman.

This will be followed by The Economic Times annual Global Business Summit this week, which coincides with another Global Summit hosted by Zee TV’s WION in Dubai which looks at the way forward for the South Asian region.

Delhi will also play host to another annual media event, the India Today Conclave, which, again, will have the prime minister as the chief guest later this week. The theme of the event, “Mercury Rising”, is apt enough considering that it coincides with the onset of summer.

Veteran journalist Vir Sanghvi has donned many hats in the media world, from print to television, but now he’s donning another—a chef’s hat. He has joined India’s equivalent of the Michelin Guide as part of a new venture called Culinary Culture.

It is a platform, modelled on the Michelin Guide, which is looking to become India’s most definitive voice in the food space. The platform was launched by Sameer Sain, founder of EverstoneGroup, and Sanghvi will serve as its chairman.

The platform will rate restaurants, recognise achievers in the industry and organise knowledge exchange sessions with globally acclaimed chefs. Bangkok’s famous Michelin starred chef Gaggan Anand will serve as mentor while Vir’s son, Raaj Sanghvi, will be the CEO.