Memorandum of Procedure (MoP) is being literally used to paper over the cracks between the government and the higher judiciary. The Chief Justice of India (CJI), JS Khehar, has said that the court will take a final call with regard to the MoP, maybe by the end of this month. He said this recently while disposing of a Public Interest Litigation (PIL) with regard to appointment of judges to the Punjab and Haryana High Court.

After the Supreme Court in late 2015 struck down the National Judicial Appointments Commission (NJAC) Act 2014 as violating the basic structure of the Constitution, it had agreed that there was need for changes in the functioning of the collegium, comprising the CJI and four senior judges of the court, in choosing the judges of the apex court and those of the high courts. The apex court conceded that the collegium was not functioning as it ought to and there was need to change its manner and matter of working.

But the matter is stuck for more than a year. The Department of Justice (DoJ) had sent to the court amendments to the MoP for consideration and consent. The last communication on the matter dates back to July 1, 2016.

Meanwhile, the department-related parliamentary standing committee of personnel, public grievance, law and justice had tackled the burning issue of the delay in appointment of judges to the Supreme Court and High Courts in its 87th report, tabled in the two Houses of Parliament in December, 2016. It is aptly called, “Inordinate Delay in Filling up the Vacancies in the Supreme Court and High Court.”

Committee chairman and deputy leader of the Opposition in the Rajya Sabha, Anand Sharma says in the “Introduction”: “The Committee decided to take up the subject in view of the alarming pendency of cases before the Supreme Court and High Courts and thereby addressing the slow pace of dispensation of justice for the common citizens of the country. One of the main reasons identified for the large number of vacancies to the extent of 43 per cent in the High Courts is the delay in the appointment of judges.”

The report reveals the deposition of the secretary of the DoJ in the Ministry of Law to the committee with regard to the functioning of the High Court collegiums and the Supreme Court Collegium (SCC). The secretary, DoJ, told the committee that in many instances the high court collegiums did not consult the chief minister and government with the regard to the names suggested for the Bench “which is not just violation of MoP but also bypassing of authorities.” 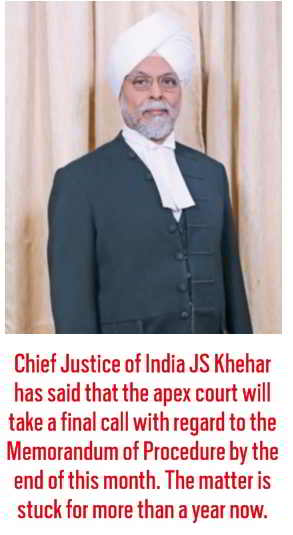 The DoJ submitted to the parliamentary committee many of the amendments to the MoP with regard to the functioning of the collegium.

The committee makes the stark declaration: “The Committee is privy to supplemental MoPs as submitted to Chief Justice of India. The response of the Chief Justice of India was received on 25.05.2016 and 01.07.2016. The Supreme Court Collegium has agreed with some of the suggestions made in the revised MoP while it has not accepted some other provisions. Many of the proposals of the Government to bring greater transparency, objectivity and accountability in the appointment process have not been accepted by the Supreme Court Collegium (SCC). The views of Government were conveyed to the Chief Justice of India (CJI) on 3.8.2016. The response of the CJI is awaited.”

There is much more disturbing news that the standing committee discloses: “The Secretary (Department of Justice) in her deposition on 21st November, 2016 submitted that out of eighty-seven names recommended by SCC, forty-four have been cleared for appointment while forty-three names were referred back to SCC for reconsideration on various grounds which includes holding office of profit, adverse IB report, held elected positions in political parties, Contradictory/Lack of views of consultee Judges, charges of sexual harassment and corruption. These forty names belong to five High Court i.e. Allahabad (24), Madras (6), Uttarakhand (3), Karnataka (3), Calcutta (07).”

The fact that lawyers with questionable credentials had made it to the list of nominees for the post of high court judges should make the Supreme Court, parliament and the government to sit up and take notice.

The standing committee in its series of recommendations for resolving the stand-off between the government and the higher judiciary, suggests some remedies to bring about what it calls “Glasnost in the process of appointment of Judges.” One of them is both for the collegium and the government to state their reasons when they reject a nominee. It says, “At present, the reasons for rejection of a particular candidate by the Supreme Court Collegium are not disclosed. The Committee feels that in case a candidate’s name is rejected for any reason by the Collegium, the candidate must be informed of the grounds of rejection. The Committee also observes the Government also rejects the names recommended by the Supreme Court Collegium without providing cogent reasons therefor. Such practices are against the principles of natural justice and leads to opaqueness in the appointment of judges.”

The other area of concern which the committee has voiced is with regard to the Government rejecting the recommendations of the collegium on grounds of “national security” and “larger public interest”. This criterion is part of the “revised MoP”.  It says: “The Committee apprehends that the Government may reject any name duly approved by the Supreme Court Collegium under the veil of those parameters. This would tantamount to giving veto power to the Government, which is not as per mandate of the Constitution.

“In order to avoid such a situation, the Committee recommends that the terms ‘national security’ and ‘larger public interest’ should, in no unambiguous terms be defined and
circumstances/antecedents which fall within their purview listed.”

The committee makes it clear that the appointment of judges is not a mere power tussle between the Government and the Judiciary, and that the parliamentary oversight through standing committees in the matter cannot be overlooked.