Last Wednesday, as Unlock 2.0 began, the Centre has issued fresh guidelines for officials and staffers of Central Government in order to prevent the spread of COVID-19. The circular sent out a clear and unequivocal message: that the dreaded disease had reached Delhi’s Power Centres and could play havoc in the many mansions and bungalows and Lutyen’s Delhi where thousands of government servants work.

The latest circular comes in the wake of several Senior Central Government officers and their staff reporting COVID cases. Among them was Defence secretary Ajay Kumar who tested positive for COVID-19, making him the highest ranking Central government official to be infected with the SARS-CoV2 virus. It is also learnt that two key officials who are directly involved in the government’s handling of the COVID-19 pandemic – Dr Balram Bhargava, head of the Indian Council of Medical Research (ICMR) and Vinod Paul of the Niti Aayog – are in self-isolation following the discovery of COVID cases among work colleagues. The two were not tested positive  but chose to self quarantine themselves for two weeks following the government-prescribed protocol in such situations.

Earlier, in mid-May, A Supreme Court judge and his family went into self quarantines after one of the domestic staff was found to be COVID19 positive. The judge and his family are under quarantine at his official residence after the cook and a law clerk were found infected with the Coronavirus. The cook reportedly was on leave since May 7 and it is believed that he had contracted the infection from his wife who had been to Safdarjung Hospital. As a preventive measure the Judge, his family members and other residential staff who may have came into contact with the cook have been put under quarantine and subjected to medical tests to confirm the infection of COVID-19.

The development comes just days after a few staff of the Supreme Court were tested COVID positive and were put under quarantine. Also it remains to be seen if more judges and other staff of the court will also require to undergo quarantines. The month of may also saw Rita Mal, an Under Secretary-Cash, Dept of Revenue, Min of Finance, North Block testing positive. Her experience which she has chosen to share is an eye opener (see story: Under Secretary About Being COVID Positive)

This week also saw the governments official spokesman and the Principal Director General of Press Information Bureau (PIB), K.S. Dhatwalia testing positive for COVID-19 and admitted to the trauma centre at the AIIMS. The National Media Centre (NMC), where his office is located, had been been closed  for three days as the entire building was sanitised, official sources said. While a massive contact tracing exercise was carried out in accordance with the standard protocol,  all activities of the Press Information Bureau, including the holding of press conferences, were to Shastri Bhawan till the NMC completely sanitised and reopened. Just days before he rested positive, Dhatwalia had shared the stage with Union Ministers Narendra Singh Tomar and Prakash Javadekar when they had briefed the media on a meeting of the union cabinet.  He was also scheduled to have meetings with Law Minister Ravi Shankar Prasad and Road Transport and Highways Minister Nitin Gadkari on 1 June. But panic spread in the high echelons when it was revealed later that the Personal Secretary Satya of Environmental Minister Prakash also test COVID Positive.

In the meanwhile, a Odisha Cadre IAS officer Tuhin Kant Pandey tested for COVID-19 Positive. He is Secretary, Union Department of Investment and Public Asset Management (DIPAM). He gets himself tested after developing a mild fever and currently has gone into home quarantine. As per the report the DIPAM which is in the CGO complex has been sealed for sanitisation. It was the third positive COVID case in the Department.

On Thursday,  for the first time since the COVID-19 outbreak, India recorded over 10,000 new cases in a day taking the tally to 2,97,535, while the death toll rose to 8,498 with a record single-day spike of 396 fatalities, according to the Union Health Ministry data. The country has registered 10,956 new coronavirus infections in the last 24 hours till Friday 8 AM. The numbers show no signs of coming down. 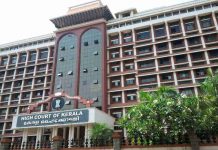