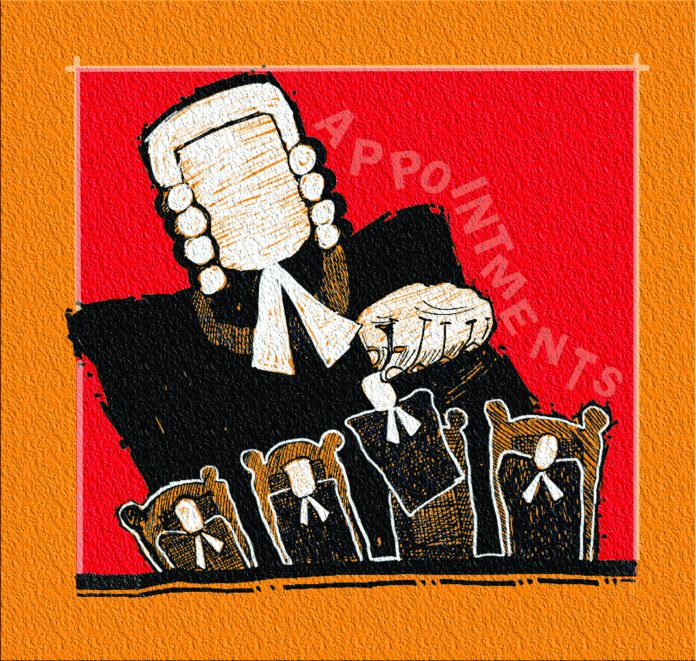 Judicial independence is the bulwark of our system. It gives life to the words of the Constitution. For any democratic country, it is imperative that the process of appointment of judges remains independent and uninfluenced. Wee Chong Jin, the first chief justice of Singapore, rightly said:

“The qualities that one should look for in a judge are a burning desire to be fair and impartial; the courage to uphold the law and strike down injustice; compassion, coupled with an understanding of human frailties; and lastly, love for the law.”

Of late, there has been a renewed debate over allegations that judges were appointing judges through the collegium system and such a process had resulted in the side-lining of the executive. Nothing could be further from the truth. Judges of district and other lower courts are appointed through a transparent process that includes three stages of exams. A competitive exam, namely PCS (J), is conducted. It is followed by a written test and the qualifying candidates then appear for interviews. This is the final stage for selection of a magistrate/civil judge junior Division. The same process is followed by all the states.

Coming to appointment of higher judicial officers, a similar exam is conducted. Advocates with more than seven years of practice are also appointed from the Bar due to their excellence in practice. Problems, however, arise in the matter of the appointment of senior judges, i.e. judges of the Supreme Court and High Courts.

The system wherein a group of the seniormost Supreme Court judges headed by the chief justice makes recommendations to the president on the names of those who should be appointed as judges led to the shrinking of the executive’s power in proposing a candidate for judgeship. It also took away the executive’s veto power.

Answering these allegations, CJI NV Ramana negated them by calling them a “widely propagated myth”. While delivering the 5th Late Shri Lavu Venkateswarlu Endowment Lecture at Siddhartha Law College in Vijayawada, CJI Ramana said: “It is nowadays fashionable to reiterate phrases like ‘judges are themselves appointing judges’. I consider this to be one of the widely propagated myths. The fact is that the judiciary is merely one of the many players involved in the process. Many authorities are involved, including the Union Law Ministry, state governments, Governors, High Court Collegia, Intelligence Bureau, and lastly, the topmost executive, who all are designated to examine the suitability of a candidate. I am sad to note that the well-informed also propagate the aforesaid notion as these narratives suit certain sections.”

As per Articles 124(2) and 217 of the Constitution, judges of the Supreme Court and High Courts shall be appointed by the president after consultation with judges of these courts. The word “consultation” is to be read as “concurrence” and if the recommendation given by the Supreme Court judges is not found to be appropriate, the candidature is reconsidered by them and the chief justice at the suggestion of the executive and then either a new candidate is recommended or the previous one is reapproved.

Over a period of time, much debate and conjecture has gone into interpreting the word “consultation” with regard to the executive’s power to appoint judges. Right after Independence, a convention of seniority was evolved for appointing the chief justice of India. Matters took a turn in the 80s after a series of Supreme Court cases in which the judiciary took over the power of appointment of judges. These cases, also popularly known as The Judges Cases—in 1981, 1993 and 1998—brought about many changes wherein the power of appointment kept on being shifted from the executive to the judiciary. The matter was finally laid to rest in the third case in 1998.

An attempt was again made in 2014, by the NDA government, to claw back control on judicial appointments by establishing the National Judicial Appointments Commission through constitutional amendments. Although the law, which gave the executive more power in appointments, had support across political parties, the Supreme Court struck it down as unconstitutional.

The biggest challenge that confronts the judiciary today is the increasing number of vacancies in courts. Even though the government is making full efforts to reduce these, yet it has been cited time and again that the centre is not strictly adhering to the timeline that has been laid down in the Malik Mazhar case. It takes a long time for the Union Law Ministry to send the recommendations made by the High Courts to the Supreme Court.

There has also been a rising trend wherein court orders are being flouted or disregarded. This also exerts pressure on the judiciary to ensure that justice is not only done but is seen to be done. Judicial review is the most important aspect in any democratic country. This ensures that the executive performs its functions within the parameters set out by the Constitution. Justice is not only the responsibility of the judiciary but the primary duty of the executive as well as the legislature of the country. Unless a concentrated effort is made by all three organs, the system of judicial review, filling up of courts’ vacancies, making laws with a clear foresight and upgrading infrastructure cannot be done successfully. And any shortfall in the same cannot be solely attributed to the judiciary.

Efforts are already being made with regard to the institution of public prosecutors (PPs). The Delhi High Court has taken steps to initiate a process of interaction with advocates who have been selected by the Delhi government to represent it as PPs. As per a statement of the CJI: “Historically, prosecutors in India have been under the control of the government. They do nothing to prevent frivolous and non-deserving cases from reaching the courts. Public prosecutors automatically oppose bail applications, without independently applying their mind. They attempt to suppress evidence during trial which could benefit the accused.” Such problems can only be redressed by having an independent selection committee for these appointments and having the right approach between all the three organs of the State.