Chief Justice NV Ramana’s concern over attacks on the judiciary has led to questions about judges’ relationship with social media and the legal framework to rein in malicious users. 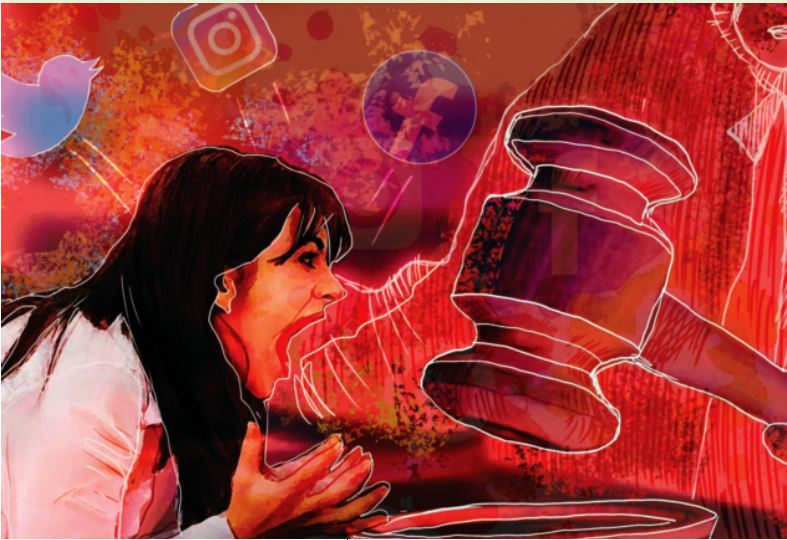 August 14, 2020: The Supreme Court holds Prashant Bhushan guilty of criminal contempt of court for publishing a photo of the then CJI on an expensive motorcycle

This was not the first time that a CJI or Supreme Court judge raised concerns over pernicious aggression via the social media platform. Be it malicious post on judgments and courtroom observations, listing of cases or administrative matters, social media users have targeted the judiciary, making it uneasy.

Social media is a minefield and those who use it do so at their own risk. Judges handling sensitive cases are often targeted, irrespective of whether they are on social media or not. Vested interests and lobbies settle scores by way of obnoxious and biased comments. These create a furore, which snowballs into a controversy.

At times, news editors play around with court orders and headlines, leading to a news article which might be completely different from the order of that case. Observations are used as story highlights which may be at variance with the order. Such reports get carried on social media and become fodder for virulent attacks. The media, therefore, has a special responsibility and social media has added to this obligation.

“Social media is a great institution, though it is amenable to a lot of misuse—ignorant, innocent abuse. The greatest danger to democracy is motivated abuse to obstruct the forces of democracy.”

As of now, social media is a largely unregulated domain. It is girdled by the provisions of the IT Act. But now things might change as the Data Protection Bill is being tabled in Parliament and its omnibus provisions may monitor and moderate social media users.

A Joint Parliamentary Committee has been deliberating on the draft bill since 2019. According to the Bill, social media intermediaries should be treated as publishers and subject to strict regulation. On the recommendation of the parliamentary panel, the Bill treats social media platforms like Twitter and Facebook as publishers and enjoins setting up a regulatory body to oversee them. This provides for liability to companies for user-generated content.

In India, social media companies have so far enjoyed “safe harbour” status and can’t be held liable for user-generated content as long as they follow the Intermediary Guidelines. Currently, the social media intermediary is not held responsible as it is assumed that it has no control over what users post.

The Bill, when it becomes law, is expected to curb irresponsible social media usage. This will have implications for judges as well. Lawful actions can now be taken against libel, apart from contempt action.

Traditional media has been largely circumspect when it came to commenting on the judiciary. Any loose comment has been strongly reprimanded through contempt action. The Supreme Court and High Courts have been extra vigilant in such matters. Even gag orders have been issued.

However, social media is a different ball game. The judiciary has been having a particularly tough time handling deviant users on this medium. One reason is the restraint the position enjoins. A judge has to react very cautiously in cases of targeted attacks. For contempt, the judiciary has to take permission from the attorney general. While initiating censure and disciplinary action, it has to take care it doesn’t get labelled as vindictive. In the 2004, Tarak Singh vs Jyoti Basu, the Supreme Court had observed: “Because of the power he wields, a judge is being judged more strictly than others.’’

But there is an existential dilemma as well. Judges are expected to be aloof, stoic and very objective. In cases such as the High Court of Judicature for Rajasthan vs Ramesh Chandra Paliwal and Daya Shankar vs High Court of Allahabad, importance has been given to the fact that judges have to live and behave like hermits. However, with social media interactions, they are opening themselves up to a new universe, a universe which is not under their control and where they are liable to be trolled, libelled and criticised. In such a scenario, the judiciary is yet to come up with a template of punitive action. However, there is an intention to clamp down on offensive comments on social media or otherwise.

“If the government does nothing to prohibit social media users from indulging in acts which the Constitution and the law does not allow and expressly frowns upon, that does not mean that the judiciary will take no action. One cannot defame others in the name of freedom of speech and expression. Let everybody know and be aware that the judiciary is not helpless. Members of the judiciary are not looking out for protectors or defenders.”

However, despite black sheep among social media users, there are sane voices on it as well. These can well neutralise the nay sayers. Justice Venkatachaliah said:

“Thomas Jefferson once said that the cure for all the ills of democracy is more democracy. That was a very prescient statement. The more social media spreads, the more it will balance itself. There is a body of scientific literature which holds that prejudiced and manipulated social media can be corrected by more social media. That’s the theory. It’s a probability that if social media is controlled by some group, then more social media will neutralise that group.”

Times have changed in such a manner that judges can’t altogether shun social media usage. Hence, the need of the hour is to develop social media interaction ethics for the judiciary. Moreover, it is argued that freedom of speech and expression guaranteed under the Constitution under Article 19(1) (a) is a basic right and it is wrong to bar judges from social media interactions.

At a high-level meeting of the Global Judicial Integrity Network in February 2020 in Doha, patterns of judicial propriety for social media usage were outlined. It was maintained at the meet:

“Irrespective of whether they use social media or not, judges should have a general knowledge of social media, including how it may generate evidence in cases that judges may decide. Judges should also have an understanding of existing online communication tools and technology, including artificial-intelligence-powered technology. Judges should receive specific training on the benefits, risks and pitfalls of their personal use of social media, as well as on its use by their family members, close friends and court personnel.”

In the 2002 Bangalore Principles of Judicial Conduct, it was held that “a ban on use of social media is a curb on basic rights of a judge as an individual”. It also tried to answer the question whether individual judiciaries regulate the use of social media by judges. And in 2006, the United Nations Economic and Social Council adopted the Bangalore Principles of Judicial Conduct.

The United Nations Office on Drugs and Crime Guidelines on the Use of Social Media by Judges 2019 is also a fairly good template which can help create guidelines for social media use by judges and the code of judicial propriety and ethics involved. Clearly the guidelines are in place, but many judges don’t venture into social media. The advocate fraternity is, however, quite active.

Also Read: Allahabad HC directs authorities to decide within a month on the promotion of a jail warder to the post of Deputy Jailer

In 2011, the International Bar Association Legal Policy & Research Unit did a global survey to assess the effect of Online Social Networking (OSN) on the legal profession. Sixty-one bar associations from 47 jurisdictions responded. The Bar Council of India also participated. The survey revealed that judges’ use of social media raised specific concerns. While only 15% of respondents felt lawyers’ use of OSN negatively affected the public image of the profession, 40% responded that judges’ use of OSN negatively affected public confidence and undermined judicial independence. Clearly, use of OSN by judges impacts their image and affects public perception.

The BCI had held that lawyers shouldn’t post comments about judges before whom they were appearing. It was also of the view that judges should refrain from posting comments or opinions about lawyers and parties in sub judice cases pending before them.

It boils down to the societal expectation that a judge should not only be impartial and above reproach, but his demeanour should reflect judicial dispassion and he should be a paragon of social etiquette and just behaviour. On the other hand, if in the course of a healthy media debate, a mirror is held up to the judiciary, it should be taken in the right spirit.

“In this country, the judiciary was treated as a sacred cow. Now it is more open to scrutiny. That is good. Like every institution, the judiciary must also be open to external assessment.’’

CJI Ramana has raised a very pertinent issue regarding social media attack on the judiciary. Its ramifications can’t be overlooked. A legal framework needs to be put in place to counter motivated attacks. The Bar has to pitch in with self-regulation for its members and the media should analyse judicial wisdom without fear, favour or frivolity.

Did you find apk for android? You can find new Free Android Games and apps.
Share
Facebook
Twitter
Pinterest
WhatsApp
Previous articleAllahabad HC directs authorities to decide within a month on the promotion of a jail warder to the post of Deputy Jailer
Next articleBeant Singh murder case convict moves Delhi HC for treatment in AIIMS