West Bengal Governor Jagdeep Dhankhar and chief minister Mamata Banerjee have had numerous and scrappy exchanges. This time the governor has the upper hand over the chief minister who did not take him into confidence before issuing the notification to constitute the inquiry commission in the Pegasus matter. 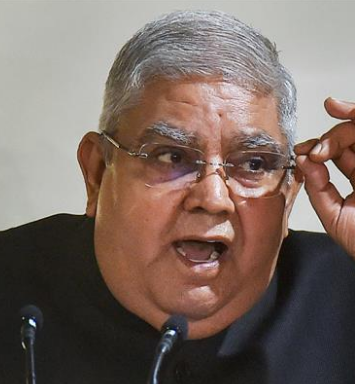 I am constrained to invoke Article 167 of the Constitution so as to seek all connected proceedings and documentation leading to issuance of notification dated 26.07.2021 constituting ‘Pegasus’ Inquiry Commission. This has become necessary as the Chief Secretary has unfortunately failed to provide such information.

It emanates from the penultimate and last para of notification dated 26.07.2021 that provisions of sub-section (2) to (5) of Section 5 and 5(A) of the Commissions of Inquiry Act, 1952 have been made applicable to the proceedings of ‘Pegasus’ Inquiry Commission, premised on the “opinion of the Governor”.

It is significant that there has been no communication whatsoever on this count from your side to this office prior to promulgation of the notification dated 26.07.2021. In such a situation, there could obviously be no formation of any opinion at my end and there has been none as a matter of fact.

In the aforesaid situation please take steps to forward at the earliest the entire record leading to issuance of notification dated 26.07.2021, precisely and pointedly also adverting on all facets of formation of opinion by the Governor.”

Under this provision, the chief minister also has a duty to furnish such information relating to the administration of state affairs and legislative proposals as the governor may call for. Further, the chief minister also has a duty, if the governor so requires, to submit for consideration of the council of ministers any matter on which a decision has been taken by a minister but which has not been considered by the council of ministers. This provision affirms the doctrine of the collective responsibility of the elected government to the legislative assembly.

Notably, Article 167 is a powerful tool in the hands of the governor to keep himself well informed about the decisions and affairs of the state administration run by the chief minister who has the full power to make decisions in the cabinet. The governor is not the master of the chief minister. The chief minister and other ministers are collectively responsible to the legislative assembly, not to the governor. They can remain in power until they enjoy the support of the majority in the assembly. The moment they lose the confidence of the assembly, they lose their right to remain in power.

However, there are some areas where the governor can act on his own discretion and can make a visible impact in the state. Mostly, in executive matters, the governor has no specific say in the decision-making process. But the governor is not a mere figurehead. No chief minister can take him for granted. He is a link between the centre and the state.

A vigilant governor, who is a man of character and ability, can really exert a potent influence on the affairs of the state with his advice, help, and persuasion, by using his experience of public life, knowledge and commitment to protecting the rule of law and constitutionalism to arrive at sound decisions on matters affecting the well-being of the people and not by his dictating any particular course of action to the chief minister.

As chief minister, Mamata Banerjee has to brief the governor about the Pegasus investigation commission thoroughly. She cannot take the governor for granted. She should have sent the file to the governor before making an important decision that affects the relationship of her government with the Union government.

Being a nominee of the President of India, Dhankhar, as governor, is constitutionally right to invoke the provisions of Article 167 of the Constitution. This is his independent power and the chief minister must furnish him the information at the earliest by following the constitutional provisions, practices, and conventions honestly.

Recently, the Supreme Court also stayed the working of the Lokur commission because a panel constituted by the Court is already investigating the case. After the Court-created panel, there was no logic to conduct the probe in the Pegasus case by the West Bengal government-created commission. The panel led by Justice Raveendran can investigate the matter effectively as it will have all resources to conduct the probe efficiently.

Given the above discussion, Dhankhar has a constitutional right to seek necessary information relating to the constitution of the Lokur commission and the chief minister should not hesitate to inform him about the matter in detail. The governor is an essential stakeholder in the state administration who cannot be kept in dark about the decisions made by the government in his name. However, the governor should also use this power to build bridges, not obstruct the functioning of the state administration. A cordial relationship between the governor and the chief minister is a must to run the administration smoothly.

Article 167 was designed for a specific purpose and the governor has sought information under that provision to preserve, protect, and defend the Constitution and serve the people of the state.

—The writer is advocate, Supreme Court of India