Beware of the Smiling Dragon

History has shown that we can’t trust our wily neighbour. Even as they smile and shake hands, they periodically needle India, as Galwan has shown. So can much be read into the Chinese foreign minister’s visit? 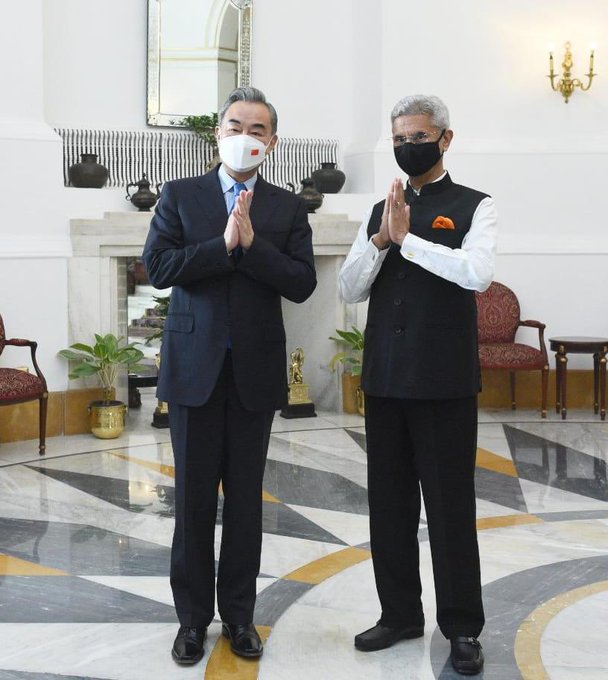 This article is not about “The Smiling Dragon”, the 1963 cult book by Helen E Peck and Jennie T Dearmin that tells the heart-warming story of a boy and his family and the Japanese culture and artistry surrounding kite flying. The book triggered the cult of the Smiling Dragon and a whole genre of cartoons and Japanese kites that continue to flourish to this day.

But today, it is related to realpolitik—of China’s dragon dance nearer our western and northern borders. Media speculation about an impending “surprise” visit of Chinese foreign minister Wang Yi came true when he landed in New Delhi on the night of March 24 from Pakistan. The Ministry of External Affairs (MEA) had been keeping mum, although it will be the first trip by a senior Chinese leader to New Delhi after the Galwan clash on June 15, 2020, in eastern Ladakh.

The MEA had probably kept it under wraps because India had been maintaining that peace and tranquillity in eastern Ladakh was an essential prerequisite for normalising estranged ties with China. Prime Minister Narendra Modi had explained this as India’s “consistent position” on ties with China even as late as March 21 during his virtual summit meeting with Australian PM Scott Morrison.

The Galwan incident was a moment of truth for India and Modi as it dashed his hope of building a win-win relationship with China despite the border dispute. After the incident, India took a series of actions to curb the influence of Chinese businesses and banned over 55 popular mobile apps. In spite of this, China continues to dominate India’s external trade; last year, it clocked a whopping $131 billion. At the same time, India has taken a number of measures to encourage manufacturers to “make in India” to replace imports from China. The fruits of these efforts are evident as India’s export of smart phones has jumped to Rs 43,000 crore from Rs 1,300 crore four years ago.

Both India and China have held a number of talks to defuse the military confrontation along the border. In September 2020, foreign ministers S Jaishankar and Wang Yi met on the sidelines of a meeting of the Shanghai Cooperation Organisation (SCO) in Moscow. Their extensive talks led to a five-point agreement to resolve the border confrontation in eastern Ladakh. The agreement aimed at implementing policy measures to defuse the border situation by the disengagement of troops, avoiding all action that could lead to confrontation and observing all protocols and agreements on border management to restore peace and tranquillity.

They met again in July and September 2021 on the sidelines of two SCO meetings in Dushanbe, capital of Tajikistan. Their talks continued to focus on ending the border confrontation. At the military level, border talks between commanders of both sides have led to progressive withdrawal of troops from friction points along the border. However, even after 15th round of commanders’ talks, held in March this year, withdrawal of troops from three friction points continues to be elusive. These include Patrolling Point (PP)-15 in the Gogra-Hot Springs area, Demchok and Depsang plain.

In spite of these efforts to build mutual trust, China periodically needles India on the border issue by publishing visuals of Indian prisoners in the Galwan incident. China has also created infrastructure to station troops permanently and populate villages created along the border. India was not amused when a commander of the Chinese forces who was wounded in the Galwan clash was used as a torch-bearer in the relay in the Winter Olympics in Beijing in February 2022.

Has the Chinese finance minister come with a proposal to ease the standoff at Ladakh border that has defied resolution during the last 18 months? It is unlikely to be such a simple process if we go by the Chinese dragon’s wily ways in the past. After all, even as Chinese President Xi Jinping was sitting with Modi on a traditional swing on the Sabarmati river front in Ahmedabad during his first ever visit to India in September 2014, Chinese troops were intruding across the Line of Actual Control (LAC) in Depsang plains in Ladakh.

Wang Yi is scheduled to meet with the National Security Adviser Ajit Doval, after which he will meet Jaishankar before taking off for Kathmandu. Apart from the border issue, there are other issues like the fate of 12,000 Indian students stuck in China after the Covid pandemic and reducing India’s trade deficit of Rs 80 billion with China.

But there are two elephants in the room—the Quadrilateral framework and the fallout of the Ukraine issue, affecting both India and China. These two issues could be the focus in Wang’s parleys in India.

The firming up of the Quadrilateral framework with Australia, India, Japan and the US as members has been a red rag for China ever since its inception in 2017. The Quad framework is not only to curb China’s increased muscle flexing in South China Sea and in the Indo-Pacific theatre, but it also aims to reduce the overdependence of international supply chains dominated by China.

After the Quad leaders’ virtual meeting in March 2021, a joint statement was issued titled the “Spirit of Quad” spelling out the group’s objectives and approaches. It included a joint initiative to bolster supply chain security for semi-conductors and their vital components, launch of a 5G deployment under the critical and emerging technologies, forming of a Quad senior cyber group to evolve shared cyber standards, development of secure software and decision on satellite data sharing. These have increased China’s suspicion of Quad members ganging up to whittle down its influence in emerging areas of technology.

China had been breathing fire and brimstone, particularly after India joined the Quad framework to curb its overreach in the Indo-Pacific. China had been warning not only India, but also browbeating Bangladesh and Sri Lanka about joining the Quad. After a Quad in-person summit meeting was held in the US in September 2021, the Communist Party of China’s tabloid, Global Times, warned India, Japan and Australia that the US will “dump them like trash” as it did to its allies in Afghanistan. It “warned” India, Australia and Japan against following the US “too far” as China would retaliate.

The editorial claimed that the US was trying to adopt an “Asian versus Asian” policy. They were pitting regional countries against each other by engaging with them. It attacked Japan’s PM Yoshihide Suga of “hyping up” the Chinese military threat to the Quad. It also said that India was not sure about the help it would receive from the US if it happens to engage in a conflict with China.

Russia’s “special military operation”, a euphemism for the invasion of Ukraine last month, and the strong response by the US and European countries, including non-members of NATO, have caught both India and China on the back foot. The strong sanctions slapped on Russia are likely to cause many problems to both India and China as they have strong multifaceted relations with Russia. It is not surprising that both the countries abstained while voting on all resolutions condemning Russia for invading Ukraine in the UN Security Council, UN General Assembly and the UN Human Rights Council. This has probably triggered fresh hopes in China to make common cause with India on the Ukraine issue. This could help China repair its fractured relations with India.

Meanwhile, the Chinese foreign minister seems to have shot himself in the foot with his statement at the Organisation of Islamic Countries (OIC) foreign ministers meeting in Islamabad on the eve of his visit here. He was reported as saying that China had the “same desire” as its Islamic friends on the issue of Kashmir and will continue to support the people of Palestine and Kashmir in their “just freedom struggle”.

Responding to media queries on these remarks, MEA spokesman Arindam Bagchi said: “We reject the uncalled reference to India by the Chinese Foreign Minister Wang Yi during his speech at the Opening Ceremony. Matters related to the UT of Jammu & Kashmir are entirely the internal affairs of India. Other countries have no locus standi to comment. They should note that India refrains from public judgement of their internal issues.”

Perhaps, a more forceful way of conveying India’s anger could have been to call off the visit of the Chinese foreign minister to New Delhi. But diplomacy and realpolitik work in strange ways. Wang Yi’s South Asia trip itself might be on a totally different mission: to boost President Xi’s standing as a “peace maker” when his term ends in 2022 and his widely expected election as lifetime presidency during the year.

In any case, there are limitations in reading the Chinese mind. In this context, it is good to remember former US Secretary of State Henry Kissinger’s pithy comment: “A turbulent history has taught Chinese leaders that not every problem has a solution and that too great emphasis on total misery over specific events could upset the harmony of the universe.”

We will have to wait and watch for any statements or their absence at the end of Wang Yi’s visit to India. So let us beware of the Smiling Dragon. Even when it smiles, its breath of fire may singe others.