Not only do judges interpret the Constitution and statutes enacted by the legislature, they also create law and realise social goals. These are based on the principle of human dignity, a core value of human rights. 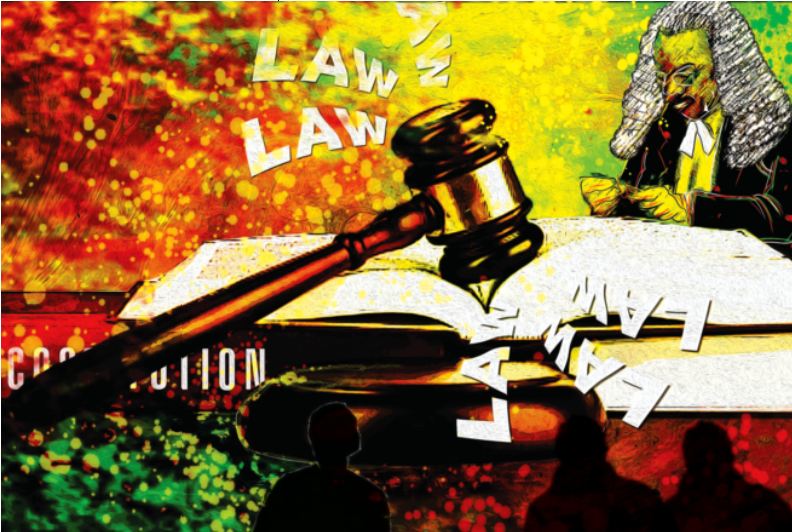 The moving finger writes, and, having writ, moves on: nor all thy piety nor wit shall lure it back to cancel half a line, nor all thy tears wash out a word of it.

Poetry sometimes is reflected in legal prose. Justice, like equality and democracy, is a word of ambiguous import and possesses a basic absolute meaning and plural relativist meaning(s).

It is dependent on specific social conditions and moulded by time, circumstance and cosmic changes. Indeed, history, geography and cultural anthropology often meet to condition these concepts, their colour and contours. The judicial process depends for its performance on the legal profession.

As Justice Krishna Iyer remarked eloquently: “Social justice through law-in-action finds fulfilment only if an aware cadre of lawmen serve the system”. Not only do judges interpret the Constitution and the statutes enacted by the legislature, they sometimes also create the law.

This statement is true for all legal systems. There can be no judgment without the establishment of law. This facet of lawmaking is manifested in common law systems. It has been developed over hundreds of years by judges. In many ways, Supreme Court decisions have also often exemplified the spirit of India’s constitutional experiment in protecting human dignity.

Also Read: Arguments on offence being cognisable or not are redundant under Section 19 of PMLA: Solicitor General

In the insightful words of Lord Goff: “The common law’s history is one of continual, incremental evolution over many centuries.” Without any legislative authorisation, judge-made law may emerge and provide remedies to new issues in a legal system. When a judge uses philosophy as a tool in his trek to the path of justice, a philosophy of life and a philosophy of law helps him in understanding his role and in executing it. Through it, a judge can participate in the search for truth while understanding the limitations and complexity of the human mind. As Justice Aharon Barak said: “With the help of a good philosophy, a judge will better understand the role of law in society and the task of the judge within the law.” One cannot accomplish much with a good philosophy alone, yet one cannot accomplish anything without it.

Law is a tool that is intended to realise social goals. There is no consensus about the content of these goals, which is why it is necessary to find a balance among the various theories. Some will regard the eclectic approach as an attempt to avoid a coherent legal theory. There will doubtless be others who regard the eclectic approach as an independent legal theory.

Whatever the case, each judge should adopt for himself a position on these questions. In 2014, the historic judgement of NALSA vs Union of India strengthened the human rights and dignity of the transgender community as the Supreme Court issued crucial orders for state(s) to follow. It was notable for upholding an individual’s right to self-identity. While concurring with the decision, Justice AK Sikri wondered if, because a person’s gender is assigned to them at birth, this would defeat the purpose of self-identity?

In the NALSA case, Justice Sikri opined that the claim of “sex” after birth “violates human rights to a large extent” and “leads to an undignified life”. The Court observed that to make the rights of transgenders’ a reality, it is necessary to first assign them their proper “sex”. In the process, society and law have utterly disregarded transgenders’ basic human right to be classified according to their gender. They have been treated as either male or female till now. This is not only unethical because it is far from the truth, but degrades and violates the human rights of transgenders.

The identification of sex as a tag since birth, according to Justice Sikri, leads to a self-identity issue. The only way to solve this dilemma is to use immediate methods of determining a person’s sexual orientation. Interestingly, the Court emphasised the third gender’s human rights and dignity, urging policymakers to uphold them. These rights include legal acknowledgment of a third gender; legal recognition for those transitioning between male and female genders, public health and sanitation, socio-economic rights and the right to be free of stigma and social awareness.

In the case of Jeeja Ghosh vs Union of India, a division bench of Justices Sikri and KSP Radhakrishnan deliberated on disability rights. In the case, petitioner Jeeja Ghosh was discriminated against because of her disability while travelling with an airline. The apex court while taking cognizance of the issue reaffirmed the rights of individuals with disabilities and instilled confidence in them. The Justices were faced with the difficult task of determining whether foreign treaties are enforceable in India and if Article 21’s “right to life” includes the “right to live with dignity”.

The rights that differently-abled people are given under the Act of 1995 are based on the basic principle of human dignity, which is the core value of human rights and is considered as vital to the right to life and liberty. Article 21 establishes such a right, now known as the human right of disabled people. The Supreme Court concluded that “right to life is given a purposeful meaning by this Court to include right to live with dignity. It is the purposive interpretation which has been adopted by this Court to give a content of the Right to human dignity as the fulfilment of the constitutional value enshrined in Article 21. Thus, human dignity is a constitutional value and a constitutional goal”.

This understanding leads us to the key intersectionality between the ideals of human rights and Article 21. As the Constituent Assembly recognised the significance of Article 21, it was left to constitutional courts to interpret it in the future. Moving on to the legacy of liberal constitutionalism, the apex court expanded on this concept by including the right to differently-abled persons and consequently, incorporating the concept of dignity and human rights into public law. Nobody could have predicted that the right to die with dignity would be included in Article 21 when the Constitution was written.

In Common Cause vs Union of India, a registered society by the name of Common Cause filed a petition in the Supreme Court under Article 32. The petition argued that the right to die with dignity should be recognised as a fundamental right under Article 21. The petitioner also asked the Court to make orders to the government allowing terminally ill patients to execute “living wills” directing appropriate actions. However, there were differences in the opinion of the apex court on this issue in its earlier judgement(s) of Aruna Shanbaug vs Union of India and Gian Kaur vs State of Punjab, which needed to be settled. In the instant case, reasonable questions came from the areas of morality and the autonomy of an individual’s existence.

Justice Sikri gave this opinion in the Common Cause case to further this cause:

“When we come to the moral aspects of ‘end of life’ issues, we face the situation of dilemma. On the one hand, it is an accepted belief that every human being wants to die peacefully. Nobody wants to undergo any kind of suffering in his last days. So much so a person who meets his destiny by sudden death or easy death is often considered as a person who would have lived his life by practicing moral and ethical values”.

Finally, the Supreme Court ruled that Article 21 guarantees the right to die with dignity. Justice Sikri’s contribution to the dilemma of human rights, privacy and its construction with fundamental rights became a vital instrument in reaching this conclusion, particularly in establishing a line between moral authority and autonomy.

A central element of a modern democracy is the protection of constitutional, statutory and common law human rights. Without these rights, we cannot have democracy. Take human rights out of democracy and it loses its soul. As Justice Georghios Pikis, former president of the Supreme Court of Cyprus, rightly observed, the essence of human rights lies in the existence within the fabric of law a code of unalterable rules affecting the rights of the individual. Human rights have a universal dimension; they are perceived as inherent in man, constituting the inborn attribute of human existence to be always enjoyed, in all circumstances, and at every place.

Furthermore, in a functioning constitutional democracy, the need of a strong criminal justice system (CJS) cannot be underestimated. Among the various

fallacies of CJS, the most crucial is witness protection. The “classic” common law operates where there is no legislation. It provides case law to govern matters that have not been regulated through legislation.

In the landmark judgment of Mahendra Chawla vs Union of India, the Supreme Court while exercising its power of judicial review brought out the Witness Protection Scheme, 2018. The Court ruled that the State would be accountable for efficiently executing it till a legislation is brought out by Parliament in this regard. The realisation of how powerful the effect of money, power and status is on the CJS was a significant issue before the Court.

“The State has a definite role to play in protecting the witnesses, to start with at least in sensitive cases involving those in power, who have political patronage and could wield muscle and money power, to avert trial getting tainted and derailed and truth becoming a casualty. As a protector of its citizens, it must ensure that during a trial in Court the witness could safely depose the truth without any fear of being haunted by those against whom he had deposed. Every State has a constitutional obligation and duty to protect the life and liberty of its citizens. That is the fundamental requirement for observance of the rule of law.”

The Constitution is the statement of Indian identity. It was meant to foster the achievements of many goals, mainly social revolution. Through this revolution would be fulfilled the basic needs of the common man, and, it was hoped, it would bring about fundamental changes in the structure of the Indian society—a society with a long and glorious cultural tradition. But greatly in need, the founding fathers believed, in a powerful infusion of energy and nationalism. The theme of social revolution and human dignity also runs throughout the proceedings of the Constituent Assembly.

The Supreme Court is rightly implementing the theme as per the wishes of great founding fathers. In the insightful remarks of eminent legal philosopher Professor Upendra Baxi:

“The rather versatile expression ‘human rights’ requires a careful conceptualisation, if only because there are many ways of taking about it. ‘Human Rights’ emerge variously as ideals to be pursued, values to be fostered, policy ends to be achieved, and virtues to be cultivated in individual and collective behaviour, economic activity and political conduct in the pursuit of human and social development.”

—Lokendra Malik is an advocate, Supreme Court, and Balram Pandey is a final year student of Symbiosis Law School, Noida