The verdict in the defamation case against journalist Priya Ramani by former minister MJ Akbar has resulted in one of the more enlightened judgments in recent times. It is a huge shot in the arm against the virus of male sexual harassment. 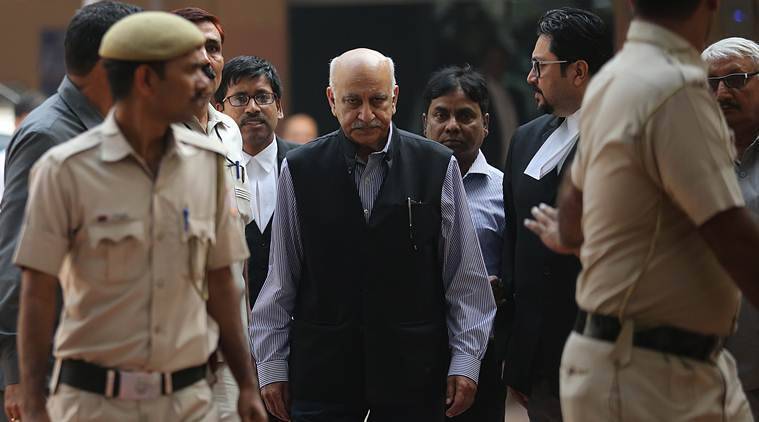 This was a classic case of truth to power. The visuals said it all. Priya Ramani, accused of defaming a man of “stellar reputation” as his lawyers put it, arriving for the final hearing accompanied only by her lawyer Rebecca John. The man of stellar reputation showed up surrounded by a posse of armed guards and a battery of lawyers 98 of them as the court records showed.

The judgment delivered by Additional Chief Metropolitan Magistrate Ravindra Kumar Pandey went beyond gender, and rightfully addressed the elephant in the courtroom the abuse of power. While acquitting Ramani, the judiciary sent out a timely and heartening message, a massive booster dose to India’s stop-and-go #Metoo movement.  It was also a clarion call for women to speak out regardless of the potential consequences.

I knew both the accuser and the accused during the course of my own journalistic career. Priya was fun and fearless, a journalist with an abiding sense of impartiality and objectivity. She wore her liberal heart on her sleeve and did not suffer fools or bigots gladly. Journalism has always been a male dominated profession but somehow Priya’s presence and her gutsy, principled stand on issues that she felt strongly about, diluted that supremacy considerably. It was that aspect of her personality that led her to quit the media organisation we worked for over coverage she deemed prejudiced.

MJ, as everyone called him, joined as editor much later and I worked under him for a brief while. It was clear even then that he had political ambitions and it was a sad day when he did join the BJP considering his undeniable and enviable contribution to journalism and as an author of some outstanding non-fiction books. Watching the TV coverage of his departure from the court surrounded by his armed entourage and a battery of lawyers, it was difficult to reconcile the two, the once admired celebrity editor and now, privileged, arrogant politician.

At the end of the hope-filled day, it was all about power and truth, and, above all, a signal for women to find their public voice without fear. Pandey’s illuminating judgment rested on a sacred document, Article 21 of the Constitution that guarantees the right to life and dignity. “A woman cannot be punished for raising (her) voice against sex abuse on the pretext of criminal complaint of defamation as the right of reputation cannot be protected at the cost of the right of life and dignity of the woman,” he wrote. It is, hopefully, a judgment that will have a far-reaching impact on women’s rights and their place in society and the workplace.

Ramani’s primary defence was that she spoke the truth, and that it was in the interest of the public for her to share her truth. Her only intention in making the disclosure against Akbar was, as she said later, to empower women to speak against their abusers and to foster a better understanding of their rights at the workplace.

The trial was triggered by Ramani sharing her story on social media about being sexually harassed in 1993 by Akbar, when he was editor of The Asian Age. Subsequently, nearly 20 other women also shared accounts of sexual misconduct during his years as an editor of various publications. In October 2018, Akbar filed a criminal defamation complaint against Ramani. The trial has continued since then, with numerous delays, forcing Ramani to fly from her Bengaluru home to New Delhi on approximately 30 occasions. She faced intimidation from day one, with no less than 98 lawyers mentioned in the vakalatnama for Akbar, mostly female lawyers from the law firm of Luthra & Luthra, led by Geeta Luthra.

At the final hearing last week, the Court significantly observed that the accused had spoken the “truth in furtherance of public interest,” which is an exception to criminal defamation under Section 499, IPC. It also made it clear that social or political status does not provide behavioural impunity, nor does a “stellar reputation”. More importantly, it is a massive boost for the social movement against male sexual abuse, better known by the hashtag #MeToo.

The movement owes its origin to another victim of sexual harassment and abuse, Tarana Burke in 2006 in America. In October 2017, actress Alyssa Milano encouraged women to tweet #MeToo on social media to “give people a sense of the magnitude of the problem”.

The World Health Organization estimates that sexual abuse affects one-third of all working women, worldwide. In India, the fear of social stigma, of being victimised, and having to appear in court to prove sexual harassment has deterred most women from going public.

A 2016 report from the Equal Employment Opportunity Commission stated that although 85 percent of women say they experience sexual harassment at work, few report the incidents due to fear of reprisal. As Ramani said after the verdict: “I felt anger again at the sniggering in the courtroom every time the words ‘me too’ were mentioned.”

However, since the #MeToo movement spread globally, Indian women have begun to go public, starting in October 2018 when a number of Bollywood actresses led by Tanushree Dutta accused fellow actors, directors and producers of sexual harassment. The accused included Nana Patekar and director Sajid Khan. Senior media personalities also came under legal scrutiny under the POSH Act (Prevention of Sexual Harassment of Women at Workplace (Prevention, Prohibition and Redressal) Act, 2013), which replaced the Supreme Court’s Vishaka guidelines of 1997.

In recent months, the #MeToo movement has lost some of its steam largely due to indifference from the government and the corporate sector. The government maintains no centralised data relating to cases of harassment of women at workplaces, as stated in Parliament in July 2019. Moreover, 95 percent of India’s women workers are employed in the informal sector where access to legal recourse against sexual harassment is non-existent.

A 2017 survey by the Indian National Bar Association of over 6,000 employees the largest conducted so far in India found that sexual harassment was pervasive in different job sectors, ranging from lewd comments to an outright demand for sexual favours. Most women, it found, chose not to report sexual harassment to management because of a host of factors, not least being lack of confidence in the complaints mechanism.

Ramani’s verdict could change all that. She is now being celebrated and treated as a role model and inspiration for other women who have been afraid to speak up. While announcing the verdict, the court held that “The woman has a right to put her grievance at any platform of her choice and even after decades.” Ramani was later quoted saying: “Many passages from the verdict were music to my ears, and I’m sure food for our collective souls.” Judge Pandey really nailed it when he said: “What does social status have to do with predatory behaviour?”

Ramani’s case is a reminder that truth can be a powerful weapon and now that a court in India has given a verdict of such progressive legal thought, it serves as a reminder that female solidarity and power are alive and well, and riding on the shoulders of brave defenders of the law and the Constitution of India.