The Right to Food is part of basic rights meant to lay the foundation for participatory democracy in India. Yet, it has been ignored in public policy and needs to be included in the Fundamental Rights 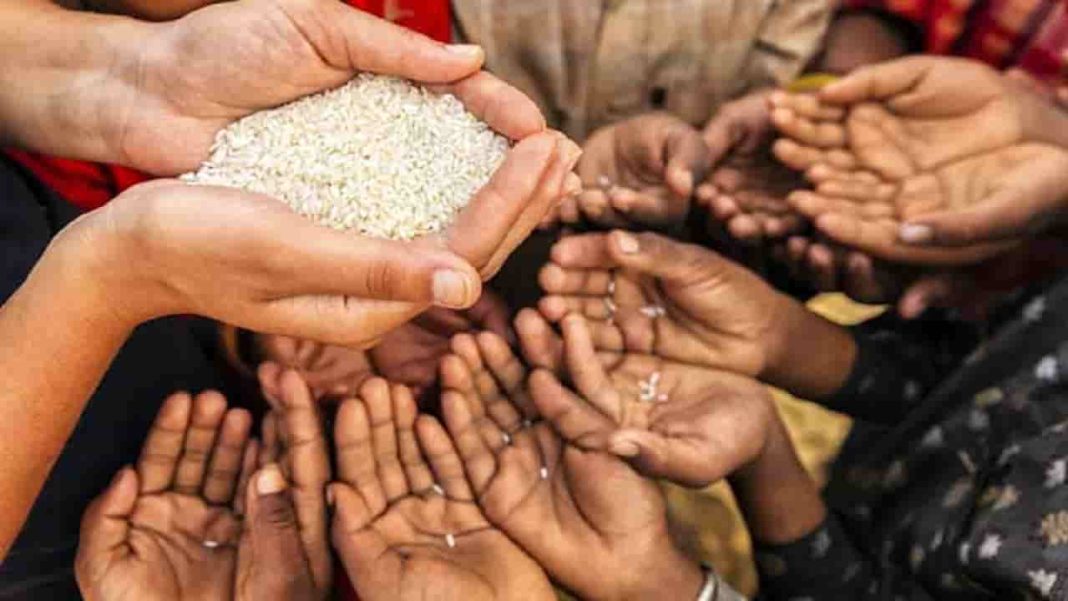 Seventy-five years of independence has seen India attaining immense growth and development, and achieving several milestones in social welfare. Despite this, the nation faces hurdles in providing basic necessities to its citizens—food, clean water, shelter, and so on. In spite of various promises of equality and justice provided under the Constitution, either in the Preamble or in the Directive Principles of State Policy or in Article 21, citizens are deprived of basic human rights. This includes the Right to Food, which actually needs to be specifically included under Chapter III i.e., Fundamental Rights.

In 2015, as per the UN Hunger Report, India had the highest number of hungry people in the world—194 million. This, even as there were 568.34 lakh tonnes of foodgrains with the Food Corporation of India.

According to Nobel Laureate Amartya Sen, even after Independence, people were afflicted with endemic hunger. As India is often considered one of the success stories in tackling the food problem, this has to be scrutinised against the grim reality.

The Right to Food is among the basic economic and social rights that were meant to lay the foundations for participatory democracy in India. However, in practice, it has been largely ignored in public policy since independence. Endemic hunger has been passively tolerated and is barely noticed in public debates and democratic polity.

Nelson Mandela said: “…We do not want freedom without bread, nor do we need bread without freedom. We must provide for all the fundamental rights and freedom.” So what are the needs and challenges facing India in realising the Right to Food as a fundamental right along with other legislative and judicial developments?

The Right to Food protects the right of all human beings to be free from hunger, food insecurity and malnutrition and has been recognised as a basic human right, closely linked to the Right to Life. Article 25 of the Universal Declaration of Human Rights, 1943, declares that every person has the right to a standard living, adequate for the health and well-being of himself and his family, including food, clothing, housing, and medical care.

The Constitution of India is the parent law upon which all other enactments are registered in the form of a central or state act. Therefore, any law to be valid in Indian Territory must be within the constitutional framework. The Right to Food is merely a statutory right in India covered under the Food Security Act, 2013, and is also covered as a constitutional right under Article 21as held by the Supreme Court. But till today, this right has not yet been embodied as a separate right.

As far back as 1981, the Supreme Court in Francis Coralie vs Union Territory of Delhi had held that the Right to Life includes the right to live with human dignity and all that goes along with it, namely, the bare necessities of adequate nutrition, clothing and shelter. This meant that Indian citizens were guaranteed right to food as a fundamental right.

In 1960 and 1982, the Court’s decision was found to be uncertain and unsatisfactory about the right to life. It is evident from the decisions of the Supreme Court that Right to Life in Article 21 does not include the right to livelihood.

The right of agriculturists to cultivation is part of their fundamental right to livelihood. But the right to carry on trade or business is not covered by Article 21. It, however, issued directions to the state in Krishen Patnayak’s case to ensure that nobody dies of starvation. A most remarkable feature of this expansion of Article 21 is that many of the non-justiciable Directive Principles embodied in Part-IV of the Constitution have now been resurrected as enforceable fundamental rights by the magic wand of judicial activism playing on Article 21.

An important milestone in clarifying the right to food and the obligations of the State to support victims in realizing this was a PIL filed by PUCL in April 2001 in the Supreme Court under Article 32 on behalf of people starving from hunger in Rajasthan. It said that excessive amount of food was rotting in the government storage and claimed the Right to Food as a fundamental right under Article 21, 39A, 39B, 46 & 47 of the Constitution. In view of the petition, the first major interim order passed by the Supreme Court in 2001 focused on eight food related schemes—Public Distribution System (PDS); Antyodaya Anna Yojna (AAY); mid-day meal scheme and five other schemes.

Essentially, the interim order converted the benefits of these eight schemes into legal entitlements. This means that if someone has an Antyodaya card and she was not getting her full quota of 35 kg of grain per month at the official prices (Rs3/kg for rice and Rs 2/kg for wheat), she can claim her dues by going to Court if necessary. The basic idea of this order was that, at the very least, the government should be held accountable to what it claims to be doing to protect the right to food i.e., implement these food-related schemes.

In recent times, the government has also taken steps to combat malnutrition by the introduction of mid-day meals at schools, anganwadi systems to provide rations to pregnant and lactating mothers and subsidized grain for those living below the poverty line through the PDS.

The National Food Security Act (NFSA), 2013, aims to ensure food and nutrition security for the most vulnerable through its associated schemes and programmes, making access to food a legal right. The PUCL petition came up for further hearing before the Supreme Court from 2001 to 2013. It last came up before the Court on January 7, 2013, in which the final report summarising the recommendations of the Final Justice Wadhwa Central Vigilance Committee Report was received pursuant to the Supreme Court’s earlier order in 2012.

The Justice Wadhwa Committee report gave several recommendations for implementing food-related schemes sponsored/run by the government with a view to fulfil the constitutional goal of granting fundamental right of right to food to every citizen. From a deep perusal of the report, it appears that various orders of the Supreme Court as well as the report itself formed the basis of the Chhattisgarh Food Security Act, 2012, and the National Food Security Act, 2013. The National Food Security Act, 2013, under Section 3, 4, 5, 6, 7, 8 and 13 guarantees food security to men, women and children of our country. The identification of eligible households under PDS and other schemes are envisaged in Sections 9, 10 and 11. Further, under Sections 14 to 21, a grievance redressal mechanism is enunciated, while under Section 16 of the Act, 2013, a State Food Commission is constituted which is responsible for redressing the grievances of citizens in case of violation of Sections 3, 4, 5, 6, 7, 8 and 13 of the Act. Sections 22 to 26 deal with the obligation of the government and local authorities ensuring implementation of the food-related schemes. Sections 27 to 29 deals with transparency and accountability of the people involved in ensuring implementation of schemes and Sections 30 and 31 state advancing food and nutritional security to those residing in remote hilly and tribal areas.

The Chhattisgarh Act is also on similar lines. Both the Acts (the Central Act, 2013 and the Chhattisgarh Act, 2012) have been made in an exhaustive manner to ensure fulfilment of the right to food enshrined in Article 21, 39A, 39B, 46 and 47 of the Constitution.

Therefore, on the basis of the landmark judgments of the Supreme Court, the legislations passed by the legislature, as well as the spectacular developments in foodgrain production, the Right to Food to citizens now requires to be constitutionally protected. This is because it has become justiciable enforceable in a court of law. This was seen in the Kapila Hingorani’s case which held: “The Right to Food not only means that hunger and malnutrition are eradicated, but that future malnutrition can be eradicated by court action or other comparable mechanisms holding the state accountable on its obligations under the Right to Food.”

It is now an opportune moment for Parliament to legislate a law embodying the Right to Food as a fundamental right under Chapter III of the Constitution.