The draconian law has no space in our constitutional jurisprudence as it goes against the fundamental spirit of democracy. Fortunately, the apex court has stopped the misuse of the law to a large extent. 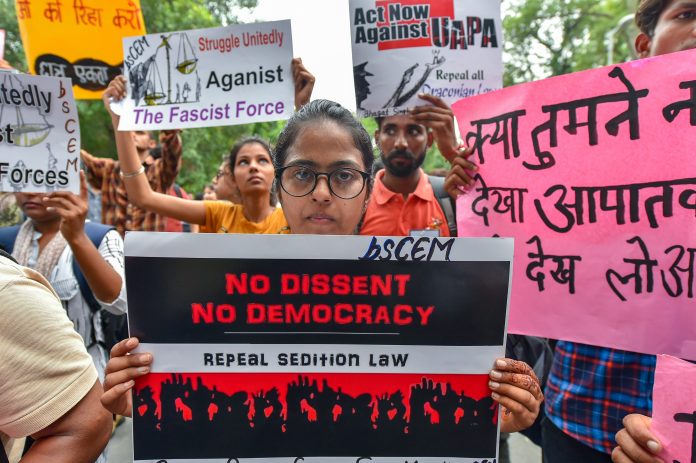 Criticism is a must for a healthy democracy and no democracy can grow without critical thinking and approach. The government receives valuable feedback from critical assessments made by thought­ful citizens who help it to improve the quality of governance. The democratic form of government, as enshrined in the Indian constitutional scheme, encourages citizens’ active participation in the affairs of the community to spread awareness about the achievements and failures of the elected government. Criticism is an essential part of this discourse. Any law that punishes criticism goes against the basic purpose of a citizen-friendly democracy. The Constitution guarantees freedom of speech and expression to all citizens subject to certain reasonable restrictions to be imposed by the State as per constitutional norms. An elected government cannot be prejudicial to those who are critical of it and its programmes. It is duty-bound to tolerate such views.

The law relating to sedition was enacted during the colonial period when people had no fundamental rights and a foreign power was ruling us. But today it has lost its relevance as the Constitution itself limits the government’s powers and provides several freedoms to the politically sovereign people.

The sedition law was misused during the colonial times when some of our great founding fathers like Mahatma Gandhi, Bal Gangadhar Tilak, and others were convicted under it. It was nothing but a tool of torture and harassment. Gandhiji had described this law as “prince among the political sections of the Indian Penal Code designed to suppress liberty of the citizen”.

But gone are those difficult times, and now people are living in a free environment. They have the power to make/unmake governments, and there is no place for this kind of law in a democratic country. Today, the rulers are public servants, not masters, and the people are their makers.

The sedition law aims to suppress people’s voice against the government as Section 124 A of the IPC says sedition is punishable with imprisonment ranging from three years to a lifetime, a fine, or both. Does India need this draconian law today? It needs to be deleted from the statute book.

All governments have misused the sedition law for suppressing criticism. In 1951, Pandit Jawaharlal Nehru, India’s first prime minister, had said in Parliament that he found Section 124 “a highly objectionable and obnoxious provision” and that “the sooner we got rid of it the better”. Yet, the provision of sedition remains in the statute book. Thousands of people are facing criminal proceedings under this law just for criticising the functioning and policies of the government.

However, some governments have demonstrated a better level of tolerance for criticism, while others cannot and punish their critics with harsh laws like sedition and UAPA. Admittedly, all governments like sycophantic views that support their policies, laws and agenda. Nobody wants to hear the dissenting views. Governments should not treat their critics like enemies and should listen to them too.

Fortunately, as a guardian of the Constitution and the people’s fundamental rights, the Supreme Court, has always stood with the people to protect their rights. In sedition cases also, the Court has made a balance between the fundamental rights of the people and societal interests and stopped the misuse of the sedition law to a large extent.

Recently, the Supreme Court quashed a criminal case registered against renowned TV journalist Vinod Dua in Himachal Pradesh under Section 124A of the IPC. Dua’s fault was that he had made critical remarks against Prime Minister Narendra Modi. This verdict has set a good precedent for human rights jurisprudence. It is, indeed, a great ray of hope for all those contributing to the exchange of ideas and critical evaluation of governmental functioning.

In 1962, in Kedar Nath Singh’s case, a five-judge constitution bench of the Supreme Court upheld the constitutional validity of Section 124A of the IPC and attempted to restrict its scope of misuse. The Court ruled that “any written or spoken words, etc., which have implicit in them the idea of subverting government by violent means, which are compendiously included in the term ‘revolution’, have been made penal by the section in question. But the section has taken care to indicate clearly that strong words used to express the disapprobation of the measures of the government with a view to their improvement or alteration by lawful means would not come within the section. Similarly, comments, however strongly worded, expressing disapprobation of actions of the government, without exciting those feelings which generate the inclination to cause public disorder by acts of violence, would not be penal”.

Notably, as per the Kedar Nath Singh ruling, only writings or speeches that incite violence can be called seditious. But despite the above landmark ruling, the sedition law has been misused by the government on several occasions to curtail free speech and muzzle dissent and has been brazenly used to criminalise protestors who oppose policies and laws framed by the government.

During the last few years, the sedition law has been highly misused in many cases such as Disha Ravi, Vinod Dua, JNU students, Jamia students’ case, anti-CAA/NRC protesters, journalists, etc. The sedition law has been used as a tool of harassment and torture of innocent people who dare to speak against the government. Data suggests that 96 percent of sedition cases filed in the last decade against citizens for their disapproving remarks regarding political leaders took place after Narendra Modi became the prime minister.

However, the conviction rate in sedition cases is very low. Several writers, students and intellectuals have been booked under the sedition law during the last few years and they are languishing in jail for months and years pending trials. The government led by Modi is well-known for its “either my way or the highway approach” that leaves no space for criticism. There is a general belief in society that the sedition law needs to be scrapped for protecting free speech and human rights.

Of course, certain reasonable restrictions can be always be imposed by the State on people’s fundamental rights for maintaining peace and public order in society as clearly mentioned in the Constitution, but a balance of rights should always be maintained. One person’s right is another’s duty and no person can be allowed to incite violence in the name of exercising his/her freedom of speech and expression. Needless to say, if someone uses wrong words and writes something that incites violence or has a tendency to incite it, or has an intention to create public disorder or disturbance of law and order, he should face the consequences.

But the government cannot be allowed to clamp down on opponents by imposing sedition charges without reasonable justification against those who do not incite any violence. Public protest, dialogue, and criticism also need constant protection.

It will be better if Parliament abolished the law given its constitutional mandate to enact just, fair, and reasonable laws in the larger interests of people. It will be a great tribute to Mahatma Gandhi, who was also a victim of the sedition law and had strongly advocated its abolition.

Many countries, including the UK, have abolished this law. As long as it remains in the statute book, governments will be tempted to misuse it to stifle dissent and criticism. If Parliament fails to do so, the Supreme Court should not hesitate to strike it down.

This colonial-era law has no space in our constitutional jurisprudence as it goes against the fundamental spirit of democracy. India does not need these kinds of draconian laws.