Why Maldives matters to China?

China-aided projects in the Maldives have given rise to a lot of security concerns for India, the US and its allies. China is paying to woo India’s Indian Ocean island neighbours, particularly the Maldives and Sri Lanka. 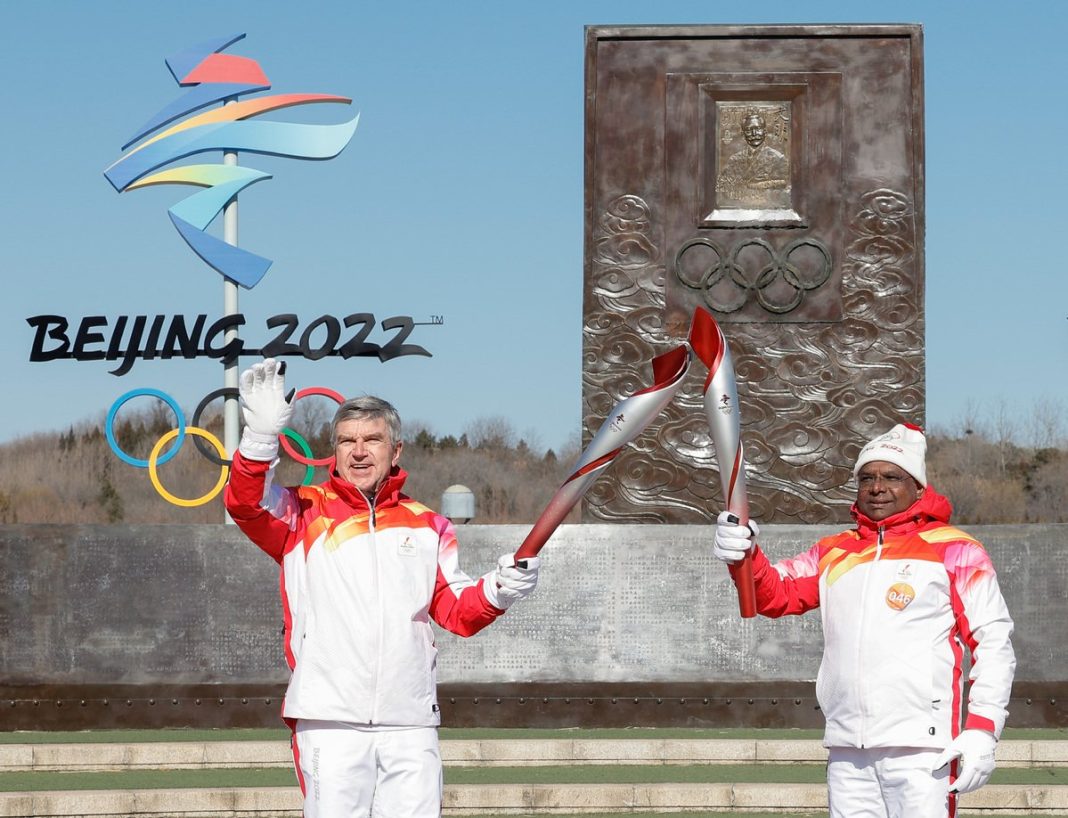 China’s use of the PLA regiment commander involved in the 2020 Galwan clash as a torchbearer for the Winter Olympics had drawn flak from not only India but also its QUAD ally—the US. India regretted the incident as China’s attempt to politicise the Games, while the US described it as “shameful” and deliberately “pro­vocative.” The use of the PLA commander at a global meet is not merely China’s provocative gesture to needle India. It is a small sample of the “war by other means” (“non-contact war” in military jargon) China is currently progressing in the Indo Pacific theatre.

While China’s misuse of the PLA commander in the torch relay garnered enough publicity, probably few noticed the torchbearer, who exchanged the flame with the final torchbearer Thomas Bach, president of the International Olympic Committee. He was Abdulla Shahid, foreign minister of Maldives and president of the 76th session of the UN General Assembly. It was probably a heart-warming moment for the Maldives, one of the tiniest countries in the world with barely 300 sq m of land, to see its foreign minister given this honour at an Olympic Games. No doubt Shahid’s position as the current president of the UN General Assembly helped the Chinese decision. But it showed the close attention China is paying to woo India’s Indian Ocean island neighbours, particularly the Maldives and Sri Lanka.

Maldives is a chain of 26 atolls, stretching from Ihavandhippolhu Atoll in the north to Addu Atoll in the south, spanning 90,000 sq km of territory across the Equator, and has few resources. Maldives archipelago is located on the Chagos-Lakshadweep Ridge, a vast submarine range in the middle of the Indian Ocean. It is located 750 km South­west of India and Sri Lanka. Historically, Maldives has ethnic, religious and cultural connectivity with India and Sri Lanka. Maldives’ language Dhivehi is a dialect of Sinhala and with a script derived from Arabic. In fact, Minicoy the southernmost and second largest island in the union territory of Lakshadweep, has around 12,000 Mahl people of Maldives ethnicity.

Maldives-India relations have been close since colonial rule ended in 1965 and Maldives became a republic. It was India that responded first to President Maumoon Gayoom’s call for assistance to thwart a coup attempt in 1988. After Mohamed Nasheed came to power in 2008, Maldives signed a defence cooperation agreement with India in 2009. Under the agreement, India would install 26 radars on all the atolls to link up with the Indian coastal command. Indian Navy and the Maldives National Defense Force (MNDF) carry out joint surveillance and patrolling activities. India had been swift to provide help and succour during the 2004 tsunami and when the country faced a drinking water crisis in 2014.

After Prime Minister Narendra Modi adopted “neighbourhood first” policy when he came to power in 2014, India-Maldives relations got a further boost. India is involved in a number of projects like the Greater Male Connectivity project, cargo vessel services and capacity building and training of MNDF and Maldivian civil servants in India and the Gulhifalhu Port Project. Indian defence forces and MNDF regularly hold joint exercises. Even during Abdulla Yameen’s rule which was skewed in favour of China, he played down his anti-India rhetoric to visit New Delhi and sign the Indo-Maldivian Action Plan for defence. India has supplied a Dornier surveillance aircraft to Maldives to keep an eye on Chinese vessels as well as casualty evacuation from isolated islands and prevent poaching and drug smuggling in Maldivian waters. The US military base located at the atoll of Diego Garcia in Chagos archipelago, 1713 km from Maldives, was used during the US operations in Afghanistan. Its strategic importance has increased after the Quadrilateral framework for Indo-Pacific security came up.

The Indian Ocean’s strategic importance has gone up after President Xi Jinping’s Belt and Road Initiative (BRI) was launched in 2013 to increase China’s strategic outreach across continents. The 21st Century Maritime Silk Road (MSR) forms the oceanic part of BRI infrastructural connectivity. It enables China to secure passage for its international maritime trade to pass through bottlenecks in the Indian Ocean. Maldives and Sri Lanka are important pivots for the success of the MSR, more so after the Quad framework started taking shape.

President Xi Jinping was the first Chinese head of state to visit Maldives since the two countries established diplomatic relations in 1972. His visit to Maldives on May 15, 2014, on his way to Sri Lanka and India, underlined the island nation’s importance in Xi’s strategic outreach under BRI.

Though Chinese companies had been involved in project contracting in Maldives since 1985, it made a quantum jump after President Yameen, with a strong pro-China stance and marked hostility towards India came to power in 2013. Not only has Yameen responded to Xi’s invitation to join the MSR during his visit but also signed a free trade pact with China a few months later.

During Yameen’s tenure as President till 2018, a number of Chinese infrastructure and investment projects were executed. Male-Hulhumale bridge conceived in 2007, was constructed by China Harbour Engineering Company at a cost of $210 million. Similarly, Beijing Urban Construction Group replaced Indian contractor GMR, to complete the stalled Male international airport expansion project at Hulhumale in 2018.

An unnamed Chinese company acquired Feydhoo Finolhu, a tiny islet with half a square mile area, located three nautical miles from the Maldivian capital, Malé, on a 50-year lease for a price of $4 million in December 2016. However, the Finolhu beach resort with 125 private villas with a wharf for ferrying guests built on the property is now fully functional. Similarly, the CJL Investment promoted a joint venture of Guangdong Beta Oceans and a Maldivian partner, has taken the Kunaavashi island in Vaavu atoll, 35 nautical miles from Malé, on a 50-year lease to build a resort. An Australian company is now managing the La Vie Hotels and Resorts there.

However, the opaque process of Chinese aided projects and widespread corruption in Maldives have given rise to a lot of security concerns to India, the US and its allies. A case in point is the Joint Ocean Observatory project at Makhunudhoo, the western most is­land, finalised in 2017 by China’s State Oceanic Administration. India was concerned that China would use it to observe more than ocean conditions. At India’s urging, Maldives dropped the project in 2019.

The 2018 election was marred by President Yameen’s misuse of state resources, police interference during opposition campaigns and manipulations by electoral officials in favour of Yameen’s Progressive Party of Maldives (PPM). After former president Nasheed was disqualified on an unproven 2015 terrorism charge, the Maldivian Democratic Party (MDP) nominated Ibrahim Mohammed Solih. He secured 58% of the votes, with Yameen scoring less than 42%. Now Maldives is ruled by a coalition of MDP, the Jumhooree Party, the Maldivian Reform Movement (MRF) led by former president Maumoon Gayoom and the conservative Adhaalath Party.

Solih came to office with a debt of $1.4 billion accumulated by the Yameen government, mainly to the Chinese. He is trying to work out ways to service this debt. He has tried to improve accountability, weed out corruption, tone up the judiciary and improve gender equity with some success. He is yet to tackle the lingering Islamist extremist threat. Solih has signed a defence deal with the US and another agreement with Japan to strengthen the MNDF coast guard. Both India and the US have helped the Maldives with vaccine supplies and medical equipment to fight the Covid-19 pandemic; so, did China. China’s foreign minister Wang Yi made a whistle stop trip to Maldives in January 2022 and looked at some of the BRI projects.

Yameen was sentenced to five years imprisonment in a case of money laundering in November 2019. However, the Maldives Supreme Court has set aside his conviction. Days after his release, the PPM, the main opposition party, launched the “India Out” campaign. Though Yameen has explained that it was aimed at only the presence of Indian security forces in Maldives, it is probably a political curtain raiser for the year 2022.