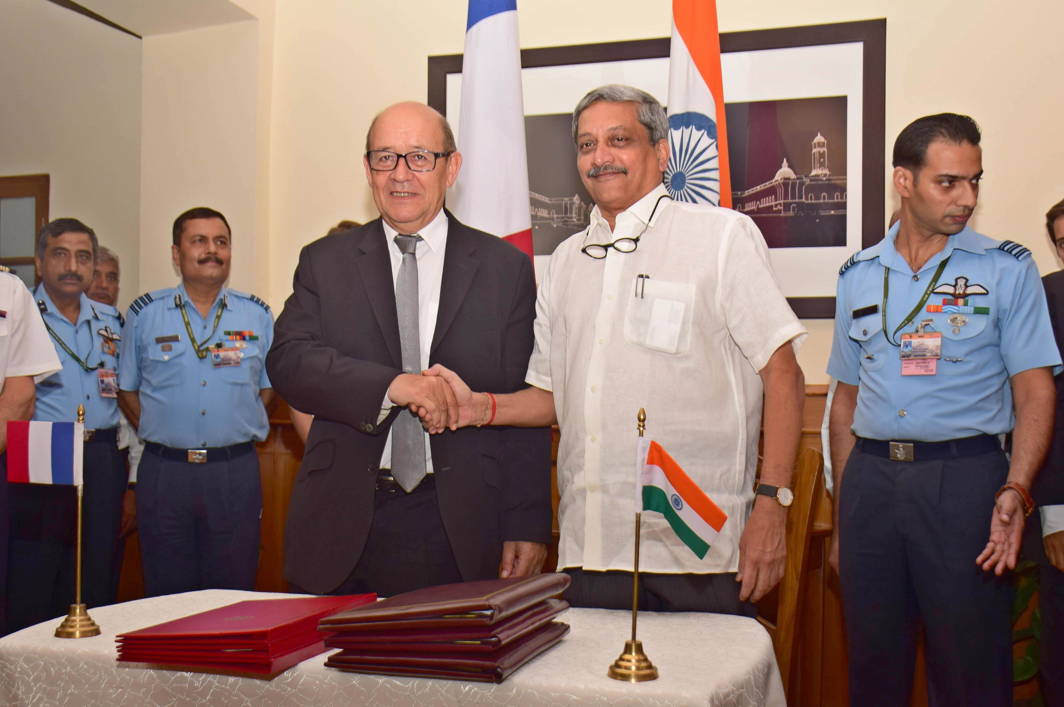 It is naïve to imagine anything secretive about Rafale aircraft when Dassault has been desperately seeking international markets. And if there is so much secrecy, the deal is surely not kosher

Anybody with a bit of military knowhow will easily accept that nothing is truly secret and when it comes to global weaponry even less so. The international military shopping arcade is a patently commercial exercise. Between trials and pre- and post-purchase training and real-time demonstrations at fairs and shows, the cat scarcely stays in the bag. Putting aside the Rahul Gandhi gauntlet thrown in terms of the scarcely veiled accusation of hankypanky in the Rafale fourth generation fighter deal and the defence by Prime Minister Narendra Modi, there are other angles to look at. Security is a perfect vehicle to shut everyone up; to question it is anti-national.

The fighters are nowhere in sight as yet and will not be for some time so how much of security is jeopardised by what is known about the Rafale besides the obvious that it is a twin-engine, canard delta wing, multirole fighter aircraft designed and built by Dassault Aviation of France? India will get latest weapons like the Meteor and Scalp missiles as part of the contract, besides a five-year support package that assures high availability of the fighter. The first is a precision long-range ground attack missile that can take out targets with extreme accuracy. The second is a beyond visual range air-to-air missile that is arguably the best in its class and can blast enemy aircraft at a range of over 100 km.

The Rafale has been performing in public at the Farnborough, Le Bourget, Dubai and Singapore air exhibitions with all details of its performance envelope, armament and avionics known to the public. It has demonstrated its flexible capabilities. For example, on offer is the top-of-the-range Israeli-built heads-up helmet-mounted display systems. Named Targo 2, the system allows pilots to plan, rehearse, fly and debrief using their personal helmets, providing them with increased situational awareness, safety levels and operational abilities.

First flown in 1986 and now hitting around 165 to 170 aircraft at the start of this year, the Rafale F1 is redundant and the F2 has been upgraded to F3. These changes have added the ability to carry French ASMP-A air-launched nuclear missiles, allowing Rafale to replace the Mirage 2000N in that nuclear strike role. Those interested can look for other modifications. The Rafale, which in French means “burst of wind”, can also be configured for full integration with the Thales’ surveillance and laser targeting pod. It also makes sense that India looks at the maritime Rafale M for its placement on aircraft carriers. The self-sell underscores a specific capability. “Catapulted from a carrier deck in less than 75 meters, the Navy Rafale instantly and automatically rotates to the correct angle of attack. This critical operation is made possible by the aircraft’s innovative ‘jump strut’ nose landing gear.”

So if this batch of 36 fighters is destined for the flight deck and is the only delta winged carrier fighter in the world, then maybe we have a leading edge in this deal. In January 2018, this version took part in a naval exercise aboard the USS George W. Bush. At that joint show of force, the French attache was widely quoted as saying: “We want to demonstrate our ability to integrate with U.S. military services… We want to show we do maintenance, demonstrate we can load weapons.” Suffice it to conclude that anything the French had on offer for the Rafale is common knowledge in the US. In February this year, The Economic Times added its little bit: the Rafale has an on-board oxygen generation system which suppresses the need for liquid oxygen re-filling or ground support for oxygen production.

It can carry out a wide range of missions: air-defence/air-superiority, reconnaissance, close air support dynamic targeting, air-to-ground precision strike/interdiction, anti-ship attacks, nuclear deterrence, buddy-buddy refuelling….It is naïve to imagine there is anything secretive about a commercial aircraft like the Rafale which has been desperately seeking international markets since 2001. And if the purchaser is going to go all hush-hush, it is certainly going to power the suspicion that everything is not kosher about the deal and a whiff of scandal is then driven to a full-blown stench because there are other aircraft that haven’t even got a look-in.

The future batches of what could be 126 Rafales will be assembled in India in a deal with Reliance Defence Limited. This nexus has caused its own controversy because it is based on an assumption that the Ambanis have never entered the military hardware market. This conjures up images of the top brass in Reliance wearing dungarees and carrying pliers and screwdrivers and messing about clumsily with these aircraft in a pool of oil and ignorance. Since the massively technical and sophisticated expertise and acumen will be totally French and the seller is happy to share that knowhow with Reliance, the beef is bed-rocked in personal prejudice.

Again, there is no outstanding option in India whose manufacture of military equipment has a record that has scarcely been sterling. Recall the 1,430 bulletproof vests from a total order of 4,600 made by the Maharashtra police from a Kanpur-based manufacturer being easily penetrated by AK-47 bullets? In this lies the test of our mediocrity. If we decide to make at home, not only do we often get it wrong (remember the Kirkee factory .12 gauge shells as compared to the Eleys of the UK), but ironically, there are not many contenders in the military shopping arcade in India. 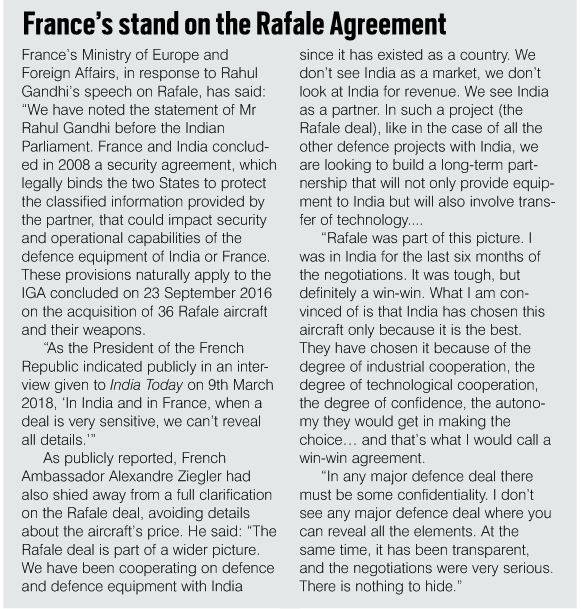 Suffice it to say that the technical and sophisticated expertise and acumen will be totally French and if the seller is happy to share that knowhow with Reliance, the option becomes easier to accept. Contrary to popular opinion, the seller has more than a vested interest in how these planes are assembled. Tomorrow, if one of them falls out of the sky, it is their reputation at stake. If they are comfortable with Reliance, they must have done their due diligence.

The problem then is quality control of the “Make in India” endorsement. Having lagged behind for 70 years, the public sector military complex has now become a mindset. Tejas LCA is a supersonic, single-seat, single-engine multirole light fighter aircraft that has been under development over 35 years by India’s Aeronautical Development Agency in cooperation with HAL. Unhappy with the initial Mark-I variant of the Tejas, the IAF requested various upgrades in a more advanced version of the fighter jet, the Mark-IA. Last heard, it still had 50 snags. Absence of infrastructure, shortage of trained personnel and high quality and hugely expensive machines to make the weapons, generate commercial hesitation.

Ergo, the Modi-Jaitley-Sitharaman chorus of chirping protest and misplaced display of patriotic fervour along with the stealth and taciturn furtiveness of the sale is difficult to understand. The French foreign ministry coming out with an explanation of clauses demanding confidentiality sounded pretty lame and more an investment in saving the bacon from the fire to ensure the sale was still on. The confusion over the final cost and the multiple figures bandied about haven’t helped either. Dassault’s silence over the cost per fighter adds more dollops of doubt about what’s going on. The cherry on the crumbling cake was Gandhi’s statement that French President Emmanuel Macron assured him that there was no official secrets treaty between the two nations. Similar sentiments were also disclosed by former Defence Minister AK Antony and Congress MP Anand Sharma.

The only area of relevance that could call for such acute secrecy is the area of the offset promise. Variously placed at 15 percent, then 30 percent and afterwards as high as 50 percent of the total cost, what exactly it constitutes could come under the umbrella of national security, especially if it concerns French nuclear technology for building reactors in the country. Despite the government’s relatively clumsy exercise of super-discretion over the Rafale’s purchase, for now, let the jury stay sequestered.