In a shocking case, the MP police busted a gang making forged documents to facilitate the release of hundreds of criminals across the state—with the likely collusion of lawyers

Hundreds of criminals in MP are roaming free after various lower courts granted them bail on the basis of forged loan books. This fraud was revealed on July 12 when Bhopal police busted a gang that used to produce forged documents in courts across the state to facilitate bail. According to the police, the gang confessed to securing bail for the accused in around 1,000 cases ranging from petty crimes to murder in the past five years.

Bhopal Deputy Inspector General of Police (DIG) Dharmendra Choudhary said the police will approach courts to get the bail of all these criminals cancelled. Based on the forged loan books seized from the gang members, the police is seeking information from courts as to who the criminals were and under which sections of the IPC they were arrested. “We are saddled with the task of identifying the criminals who benefitted from the fraud and the courts that trusted the forged documents furnished by the gang members,” a police officer associated with the investigation told India Legal.

The police has so far arrested 10 members of the gang from Bhopal and Jabalpur and interrogated them to know if more such gangs are operating in the state. More arrests are likely soon, say police sources. Many of the fraudsters were masquerading as “friends of court” (nyay mitr). The police suspect that some lawyers in Bhopal and Jabalpur might be involved in the racket. The “nyay mitrs” were in contact with many lawyers who are considered “experts” in getting quick bail for criminals.

Bhopal Superintendent of Police Rahul Kumar Lodha told mediapersons that the gang members used to charge 20 percent of the total bail amount as commission. The gang used to get all necessary information about the criminals seeking bail before furnishing forged documents in courts. Not only that, its members would make the fake guarantor appearing before the court rehearse replies to all probable questions that the judges could ask while granting bail. 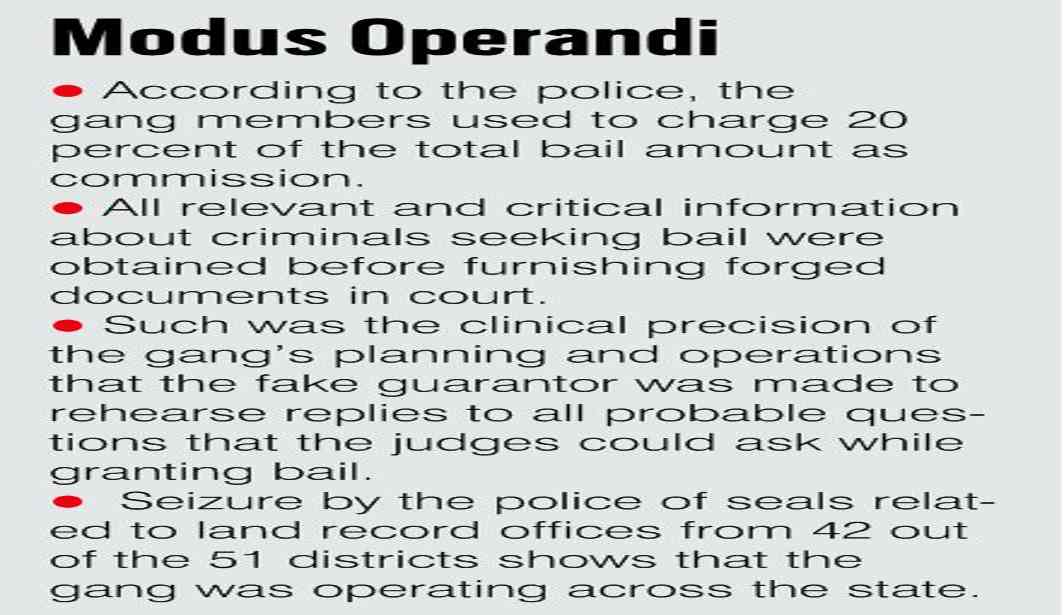 The police seized seals of land record offices from the gang. These were from 42 of the 51 districts, indicating that the gang was operating across the state. Fake seals of magistrates were also seized.

This is not the first time that such an operation has come to the fore. Two and a half years ago, a similar gang was busted in Bhopal.

It was sheer chance that led the police to bust the gang. According to the DIG, the first arrest was made when the police was probing a case of abetment of suicide registered at the Ratibad police station, Bhopal. A former contractual employee of Bhopal Municipal Corporation (BMC), Deepak Verma, had committed suicide on March 24 and left behind a suicide note in which he mentioned one Sudhakar Bokade, a resident of Bhopal, and two others.

When Bokade was arrested, the police recovered forged seals, land records in bulk, forms of the PM Housing Scheme, forged ration cards and land deeds (pattas) from him. Bokade told the police that he had provided these forged documents to Imran alias Bablu Chikna alias Yousuf, a wanted criminal with a cash reward of Rs 5,000 on his head.

On July 12, a police team nabbed Chikna and found out that he arranged fake guarantors and assisted in completing bail formalities after charging 20 percent of the bail amount. The police recovered three loan books (bahi) and five stamps of government officials from him. His interrogation led the police to arrest four persons whose photographs were affixed on fake land records to complete bail bond formalities in courts.

Suspecting a scam, the police then reviewed more than half-a-dozen similar fraud cases which were pending at MP Nagar police station in Bhopal. A subsequent probe revealed that a woman named Saifia (50) from Jabalpur had provided forged land records (plain and printed) to fake guarantors.

The police arrested Saifia and recovered five plain land records from her. Based on her information, another gang member, Ashraf alias Babua, was arrested from Jabalpur. He used to complete the forged land records by entering details and putting a seal on them to give them an authentic look.

In December 2015, a gang engaged in acting as fake guarantor for facilitating bail for the accused in various crimes in Bhopal and nearby district courts was nabbed by the crime branch. The main accused, Raju Meean, used to facilitate bail for criminals in the district courts of Indore, Dewas, Ujjain and other nearby districts. Meean had a gang of 30-40 people working for him. Following the busting of this racket, the MP police headquarters alerted all SPs to keep a watch on bail guarantors spotted outside court premises across the state. A police officer, however, said such fraud is hard to control unless lawyers cooperate. But many are suspected to be in collusion with the fraudsters. And, due to the Advocate Protection Act, it was difficult to grill unscrupulous lawyers, he said.