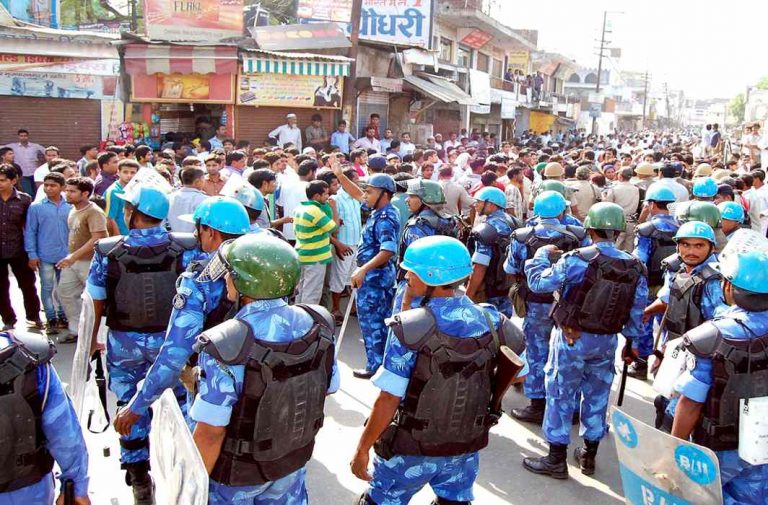 Above: File photo of Muzaffarnagar riots of 2013/Photo Courtesy: indianmuslimpost.blogspot.in

While the UP government has passed UPCOC Bill, giving the impression that it is committed to eliminating organised crime, it has withdrawn cases against 131 in the Muzaffarnagar riots

After giving the police a free hand to kill alleged criminals in encounters, the lower house of the state legislature passed the Uttar Pradesh Control of Organised Crime Bill (UPCOCB) on March 27. The Bill was passed just a few days after the government decided to withdraw cases against 131 accused in the Muzaffarnagar riots.

This was the second time the Assembly passed the Bill. It had earlier passed it in December 2017, but the upper house, where the ruling BJP is in a minority, stalled the “draconian” Bill which was drawn upon the lines of the Maharashtra Control of Organised Crime Act (MCOCA).

The Samajwadi Party, which has a majority in the Legislative Council, had forced the Bill to be referred to a select committee which did not suggest any amendment to the original legislation, thus making its passage easy. As it has been passed by the Assembly a second time, the controversial Bill need not be sent to the Council.

The BJP government may claim the UPCOC Bill is proof of Chief Minister Yogi Adityanath’s commitment to eliminating organised crime in the state, but it was initially moved by Mayawati as chief minister in 2007. The BSP chief’s Bill aimed to deal with land grabbers, contract killers, kidnappers, contractors, hawala traders, economic offenders, and drugs and spurious medicine dealers. It also proposed to discourage display of firearms in public places. Incidentally, the BJP, which was then in the opposition, had opposed the Bill and Suresh Khanna, the urban development minister in the present dispensation, had called the move “undeclared emergency”.

That may probably explain why the Opposition did not propose any changes to the Bill, even though it calls the UPCOCB anti-media as it makes “passing on or publication of, without any lawful authority, any information likely to assist the organised crime syndicate” as well as “passing, publication or distribution of any document obtained from an organised crime syndicate” a punishable offence.

Ironicallly, while talking tough against gangsters, the Yogi Adityanath government also decided to withdraw 131 cases against those accused in the Muzaffarnagar riots of 2013. The cases to be withdrawn include 13 of murder (Section 302, IPC), 11 of attempt to murder (Section 307, IPC) and two of kidnapping. The cases of heinous crime proposed to be withdrawn would in normal circumstances invite a minimum punishment of seven years, if not a life sentence.

While UP’s law minister, Brajesh Pathak, told a TV channel that “we had taken a call to reduce pendency of cases…we want to withdraw politically motivated cases in Uttar Pradesh”, senior Congress leader Kapil Sibal tweeted his criticism of it: “State to protect murderers not victims of violence. That is the message in Yogi’s decision to withdraw 131 riot cases. Wither rule of law?”

The Muzaffarnagar communal riots, in which 62 people had died, had given the BJP a leg-up in the 2014 Lok Sabha elections. At this time, Hindutva and corruption cases against the UPA government became the party’s winning card.

The process to withdraw cases against the accused, mainly Hindus, was initiated after BJP MP Sanjiv Baliyan and Umesh Malik, the legislator from Buldhana, met Adityanath with a delegation of khap leaders from Muzaffarnagar and Shamli. Baliyan submitted a list of 179 names whose cases he and khap leaders wanted withdrawn. Baliyan is reported to have said that all were Hindus.

The state law department entered the scene in February this year when Special Secretary Rajesh Singh wrote to the district magistrates of Muzaffarnagar and Shamli seeking “their clear opinion on public interest” with reason on the withdrawal of 131 cases. Section 321 of the CrPC empowers the government to recommend withdrawal of cases only in public interest, though ultimately the courts decide whether a case may be withdrawn.

As in most of these cases recommended for withdrawal, political interests are entwined with public interest and governments tend to overlook the gravity of the charges against an accused.

After becoming chief minister, Akhilesh Yadav had ordered withdrawal of cases against Shamim and Waliullah, both accused in the Varanasi bomb blast case. The Allahabad High Court put paid to his plans. “Who will decide who is a terrorist and who is not? Let the matter be decided in the court,” the High Court had observed.

There were 17 other men accused of terror acts whose cases the Akhilesh government wanted withdrawn but could not succeed because the High Court rejected the move. Akhilesh also ordered various district magistrates to withdraw sundry cases against Samajwadi Party workers as they had been “falsely implicated” by the BSP government. Adityanath has now chosen to walk in his predecessor’s footsteps.

While participating in the debate on the UPCOC Bill in December last year, Adityanath had said his government also initiated the process to withdraw 20,000 cases of breach of peace and violation of prohibitory orders. To begin with, Adityanath ordered that the case lodged against him, a Union minister, a BJP legislator and 11 others be withdrawn. The case pertained to defiance of prohibitory orders in Gorakhpur in 1995 which led to communal clashes.

The decision to withdraw cases against the riot accused, especially those of murder and attempt to murder, comes at a time when the Lok Sabha elections are again round the corner. The Muzaffarnagar riots also happened a few months before the 2014 elections.

Encouraged by the government’s attitude towards the riot accused, BJP Saharanpur MP Raghav Lakhanpal and former MLA Rajeev Gumber recently met Deputy Chief Minister Keshav Prasad Maurya with a letter, requesting that cases registered against them be withdrawn as they were “politically motivated”. Both were booked for violence in Sadak Doodhli village of Saharanpur in April 2017. Lakhanpal also led a mob to the residence of the senior superintendent of police, Love Kumar, and vandalised the property. Kumar had to flee to save himself. Lakhanpal’s acts were caught on TV and the chief minister had summoned him immediately after his daring attack on the district police chief’s residence.

The government, which claims to believe in the rule of law, has, however, forwarded the Saharanpur leaders’ request to the law department.

Under the UPCOC Bill, “organised crime” would include forcibly taking possession of government or private land, preventing someone from bidding or taking part in government contracts, to killing or getting someone killed for consideration, illegal mining or extraction of forest produce, and so on.

The presence of 143 legislators against whom criminal cases, including those of murder, are pending in courts proves that the provisions of the UPCOC Bill should be invoked against them. But given the political parties’ penchant to include criminals in their

fold, it is unlikely to happen, said a criminal lawyer.