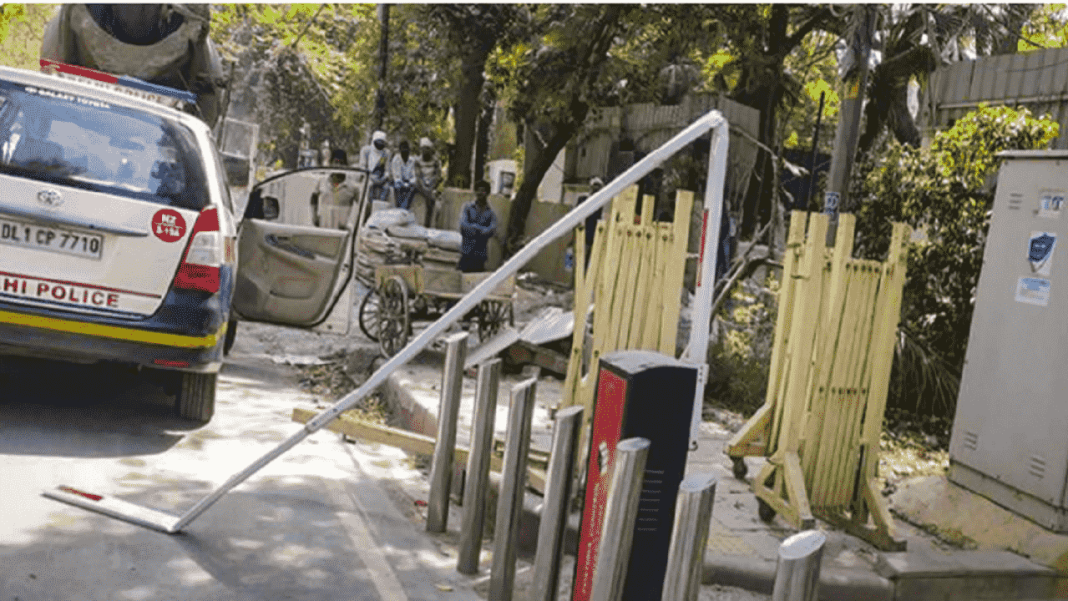 AAP MLA Saurabh Bhardwaj moved Delhi High Court against the vandalisation outside official residence of Delhi CM Arvind Kejriwal on March 30. The PIL seeks the constitution of a Special Investigation Team to undertake an independent criminal investigation in the incident.

The Petition has been filed by AAP MLA Saurabh Bhardwaj through Advocate Bharat Gupta.

The Petitioner, a Member of the Legislative Assembly of  Delhi, has filed this Petition in light of the attack on, and  vandalization of, the official residence of Chief Minister of  Delhi (“Delhi CM”) on March 30, 2022 by Bharatiya Janta Party  (“BJP”) goons, which attack appears to have been carried  out with Delhi Police’s (Respondent No1) tacit complicity.

This Petition seeks (a) constitution of a Special  Investigation Team (“SIT”) to undertake an independent,  fair and time bound criminal investigation with respect to the  attack and its perpetrators; and (b) appropriate directions for  ensuring the security of the Delhi CM’s person and residence  in future.

The petition said that, on March 30, 2022 several BJP goons, in the garb of a protest,  launched an attack on the official residence of the Delhi CM. Videos and photographs show that these goons casually  walked through the security cordon (maintained by Delhi  Police), kicked and broke the boom barrier, broke the  CCTVs cameras with lathis, threw paint on the gate of the residence and almost climbed over the gate, while Delhi Police personnel simply looked on, doing little to stop the  protestors.

While the Petitioner strongly supports the right to protest peacefully, even if such protest is against the Delhi Government, it is submitted that in the name of protest, violence cannot and ought not to be permitted and condoned.

In this case, the violence was especially egregious as it was directed towards the Delhi CM and his family. It was meant to subdue, by the use of force, the highest elected official in NCT of Delhi and therefore the elected Government of Delhi. This was a direct attack on democracy.

It is submitted that those who were charged with protection of the Delhi CM, i.e Delhi Police, completely abdicated their duty, without any regard for the fact that they were protecting an elected constitutional functionary and the fact that he was given Z+ security by Delhi Police itself.

Moreover, the Delhi Police’s inaction was in blatant violation of the Court’s order dated August 22, 2017, wherein the Delhi Police was directed to ensure that no unnecessary protest takes place on the road in front of the Delhi CM’s house, as it is a residential area.

The Petitioner said that Delhi Police was hand in glove with the goons as the goons are members of the ruling party in the Central Government, which has absolute control over Delhi Police through the Ministry of Home Affairs.

The Petitioner further said that, it is pertinent to note, that in the past as well, on December 10, 2020, there was an attack on the residence of the Deputy Chief Minister by BJP Goons, where also, Delhi Police did not take any steps to stop the attackers and thereafter failed to take any concrete criminal action against the attackers.

The petition further submitted that it is due to such inaction and complicity of the police, that BJP goons have become emboldened to carry out repeated attacks on the elected officials of the Government of NCT of Delhi.

In light of this, the Petitioner is constrained to directly approach the Court seeking (a) constitution of an SIT headed by a retired Judge of the Court to undertake an independent, fair and time bound criminal investigation into the attack, including the role of Delhi Police’s officers who were responsible for maintaining the security cordon outside the Delhi CM’s residence; (b) directions for appropriate prosecution/action against the identified accused persons/culprits; and (c) direction to the Respondents to ensure appropriate security of the Chief Minister of Delhi’s person and his residence in future.

The Petition stated that the attacks on elected officials are becoming a routine affair. If the perpetrators of the attack are not brought to justice and if responsibility is not fixed on the errant officers of the Delhi Police, then the public will lose confidence in the rule of law and will lose its faith in the ability of the police to protect it against political violence.