The Court noted the submission made by the Counsel that her father had been hospitalised in Rohtak. 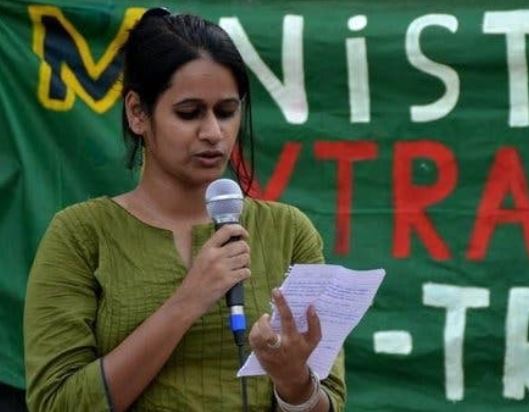 The Delhi High Court granted a three-week interim bail to Pinjra Tod activist Natasha Narwal, to attend the last rites of her father, who succumbed to Covid-19 on Sunday. Natasha has been held under the Unlawful Activities (Prevention) Act, in the Delhi Riots case.

The bench of Justices Siddharth Mridul and Anup Jairam Bhambhani said: “We are of the view that the release of the applicant is imperative in this hour of grief and personal loss and in the facts and circumstances of the case.”

The court said that Natasha shall furnish a personal bond of Rs 50,000 to the satisfaction of the Jail Superintendent. “She will provide her phone number to the SHO special cell. In addition, she will also give her phone number to Rohtak police, under whose jurisdiction, the last rites are to be performed,” said the court.

The court also directed her to comply with all the norms of the pandemic and observe all the precautions, including all but not limited to wearing a PPE kit at the time of the cremation. At the end of her bail, she shall surrender and give RT-PCR test report at the time of her surrender.

The court noted: “It has been also brought to our notice that the hospital where the body of MS Narwal is kept, is waiting for the applicant to come and receive the same.”

The court noted the submission made by Advocate Adit Pujari, Counsel for the petitioner, who sought interim bail on account of the death of her father, Mahavir Narwal.

The Court noted the submission made by the Counsel that her father had been hospitalised in Rohtak. Her brother also tested positive and was consequently unable to take care of the aging and ailing father. Mahavir Narwal, the applicant’s father, breathed his last at 1800 hrs yesterday at the said hospital.

The Counsel further stated that Mahavir Narwal is survived only by her brother Akash Narwal, who is in self-isolation and herself and that therefore, there is no one else in the family to perform his last rites and cremation.

“We have heard Pujari as well as Amit Mahajan and Amit Prasad ( SPP),” the Bench noted. The Court also observed that the state does not fairly oppose the relief prayed for now.

Counsel for the State Amit Mahajan said that she should not tweet anything. “Do you think at the hour of grief she will tweet?” the Court asked. “We are not mentioning in the order but she will maintain Radio silence,” said the Court.