The Advocate for the applicant said Faisal Khan, is a renowned social activist who has revived Khudai Khidmatgar movement of India and is working for maintaining communal harmony for the last 25 years. 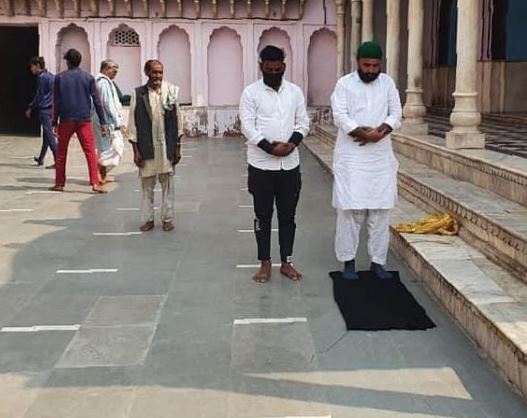 The Allahabad High Court has granted anticipatory bail to Mohd. Chand, who was with activist Faisal Khan when he offered namaz inside the Nand Baba temple in Mathura, Uttar Pradesh.

A single bench of Justice Siddharth passed this order while hearing Chand’s anticipatory bail application, with a prayer to release him on bail in the case under Sections 153-A, 295, 505, 419, 420, 467, 468, 471 IPC, Police Station Barsana, District Mathura, during pendency of trial.

There is an allegation against the applicant that he with Faisal Khan performed namaz in the temple without the consent of the priest and its photographs went viral.

The news was shown on the television. Thereafter, an FIR has been lodged on the allegation that this act of the applicant and co-accused shows disrespect for the religious feeling of other community and there is possibility of deterioration in communal harmony. It is also suspected the applicants are receiving foreign funds.

The advocate for the applicant submitted that Faisal Khan is a social activist, who has revived the Khudai Khidmatgar movement of India, and is working for maintaining communal harmony for the last 25 years and the applicant is his companion.

It was further stated that in this connection, he undertook yatra for visiting temples where he was offered prasad and lunch by the chief priest of the temple and he also bestowed blessings on him as clear from photographs in dispute.

The Counsel has stated that the applicant has been falsely implicated in this case. Only on the basis of photographs which went viral, the applicant cannot be said to have intention to disturb communal harmony. He did not enter the sanctum sanctorum of the temple rather he performed namaz outside the temple with the permission of the priest as clear from the viral photographs.

The Court was informed that Faisal Khan was arrested and enlarged on bail by this Court. The applicant also expressed his apprehension that he may be arrested any time.

“The Courts have repeatedly held that arrest should be the last option for the police and it should be restricted to those exceptional cases where arresting the accused is imperative or his custodial interrogation is required. Irrational and indiscriminate arrests are gross violation of human rights.”

Hence without expressing any opinion on the merits of the case and considering the nature of accusations and antecedents of applicant, he was directed to be enlarged on anticipatory bail, the Court orders.

The Court stated that in the event of arrest, the applicant shall be released on anticipatory bail on furnishing a personal bond with two sureties each in the like amount to the satisfaction of the trial Court concerned.