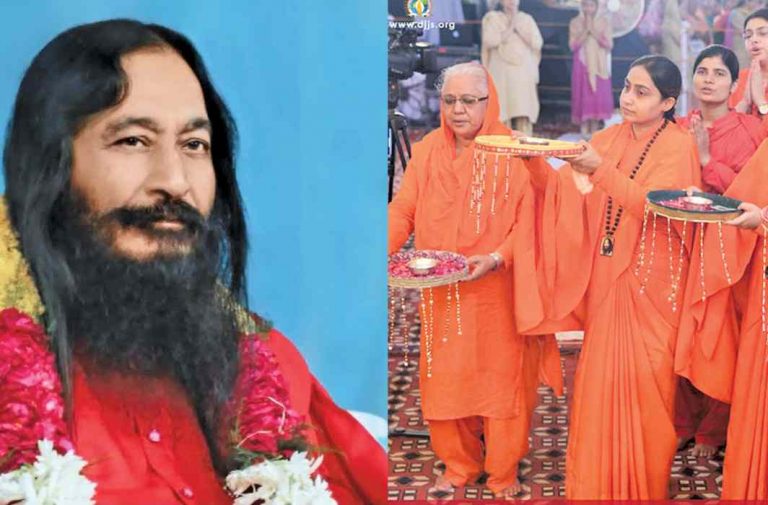 Above: (Left) Ashutosh Maharaj, who is supposed to be in samadhi; (right) the Dera which he heads claims to have 15 lakh followers across the world. Photo: djjs.org

Three-and-a-half years after Ashutosh Maharaj, head of a religious Dera in Punjab, was declared “clinically dead” on January 28, 2014, the Punjab and Haryana High Court allowed his body to remain preserved in a freezer by his followers.

The followers of Divya Jyoti Jagrati Sansthan, which Ashutosh was heading, had refused to conduct the last rites on his body and had claimed that their guru had only gone into a samadhi and would soon return. To get their right to preserve the body, they had to fight a long legal battle which culminated in the High Court accepting their plea recently.

SITTING ON THE FENCE

While the state government was dilly dallying over taking any decision after his followers’ decision to keep the body in a freezer, one of Ashutosh’s drivers, Puran Singh, approached the High Court seeking a CBI inquiry into his death. Subsequently, Dalip Kumar Jha, who claimed to be the biological son of Ashutosh, also approached the High Court and pleaded that his father’s body be handed over to him.

After several hearings, which also involved the Punjab government, Justice MMS Bedi declared on December 1, 2014, that Ashutosh had died a natural death and directed the government to cremate his body within 15 days in accordance with due religious rites. The judge directed that in the interim period, Ashutosh’s body would be given all due respect and may be displayed for the “last darshan”.

In his judgment, Justice Bedi said the belief of the followers that he is in deep mediation “could not be regarded as an integral part of the religion, and could not be protected under the right of freedom of religion”. The Court said the belief is contrary to the fundamental duty under Article 51 A (h) of the constitution requiring people to have scientific temper and humanism.

The judgment was challenged by the Sansthan on the grounds that the courts were not “competent” to distinguish between a “naturally dead body” and a body in “samadhi (deep meditation)”.

Then a division bench of the High Court, comprising Justices Mahesh Grover and Shekher Dhawan, conducted a series of hearings. The Punjab government, which was also issued a notice to give its opinion, took an ambiguous stand. It took the plea that it was in no position to give an opinion as it was a matter of “faith and belief of lakhs of devotees spread all over the world”. It said that it was the fundamental right of a sect or religion to hold any belief or faith. It also threw the ball back to the Court by taking the stand that the state couldn’t determine anybody’s religious beliefs. It said it was the jurisdiction of the court.

And in the 42-page judgment now, the division bench observed that the belief in samadhi formed an essential part of mythology and religion around which a large part of Hindu and Indian philosophy revolved. History was replete with examples where bodies were preserved, it added. “The belief of the Sansthan of the Maharaj being in samadhi cannot be forcefully shattered through the power of the state or a mandate from the court, without inviting an accusation of violating the provisions of Article 25 of the Constitution of India, particularly till the time such a belief does not conflict with public order, health or morality,” the judgment said.

The Court said the belief of the Sansthan of the Maharaj being in samadhi cannot be forcefully shattered through the power of the state or a court mandate.

It went on to say that “whether one accepts the theory of Karl Marx or the economics theory of Prof Smith, Keynes or Freud in mind sciences, there would be a question of belief of the propagator, with the non-subscriber having a right to disagree but not to the point of curbing or stifling the others’ belief unless it offends public order, health or morality for these could be just reasons to circumscribe an offending thought to thwart an anarchy. Likewise in religion.”

Referring to the single bench’s order for cremation on the grounds that the practise of samadhi was not part of the Sansthan’s religious practice, the division bench said that “what was core to the sect and its followers” was the “word of their guru”. It added that “it was not their belief in the concept of samadhi that had to be tested on the touchstone of inherentness but their faith in their spiritual leader’s words and teachings”.

The court directed the Dera to periodically get the preserved body examined by a team of doctors from Dayanand Medical College, Ludhiana, and ensure that the body does not degenerate or decay. It also asked Dalip Jha to file a civil suit for a DNA test if he so desired and directed the Sansthan not to resist the handing over of a DNA sample from the body.

The issue concerning Dera, which claims a following of over 15 lakh, was a hot potato for political parties. A majority of the followers belong to the Dalit community which constitutes 32 percent of the total population of Punjab and is a significant factor during elections.

It is no wonder then that political leaders cutting across party lines visited the Dera to attend a massive function organised at “Guru Purnima” shortly after the High Court verdict.