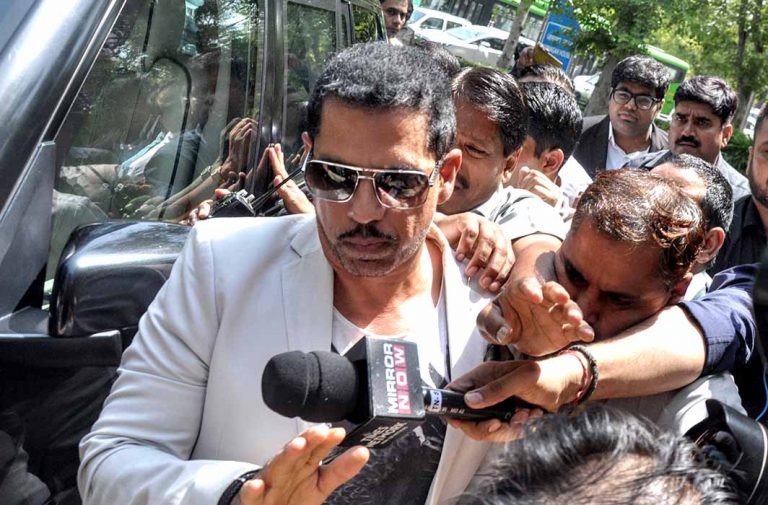 The CBI court has reserved order on a petition by Robert Vadra seeking permission to travel abroad for business purposes.

The counsel for Vadra, Senior Advocate KTS Tulsi, told the court that the previous record of the applicant has been satisfactory and he never tempered with any of the evidence. Vadra  has to travel from 20 September to 8 October 2019 for a scheduled business tour. The court was hoever told by the counsel appearing for ED who opposed the application that allowance of travel may lead to tampering of the evidence and could fracture the investigation process in the matter.

It is the second application moved before the court after he was granted anticipatory bail in money laundering case. Vadra is facing corruption and money-laundering probe by CBI and Enforcement Directorate.

The ED is investigating money laundering angle in the purchase of a London-based property at 12 Bryanston Square worth 1.9 million pounds. This year in April, the court had directed Vadra not to leave the country without its prior permission. The direction came after the probe agency suspected that the businessman may destroy evidence if he was allowed to travel abroad.

However, Vadra again moved the court seeking permission to travel abroad on health ground. The Court allowed him to travel but only to the US and the Netherlands. It did not allow Vadra to visit the UK and also asked him to submit his travel schedule. According to PTI, the court in its order directed the brother-in-law of Rahul Gandhi to submit the details of his stay abroad along with his contact numbers to the court before his departure.

It also asked him to furnish a bank guarantee for Rs 25 lakh. “He (Vadra) shall not tamper with the evidence nor try to influence any witness in any manner and shall not use the permission granted to him contrary to the rules. The applicant shall join the investigation within 72 hours of so informed by the investigating officer,” PTI quoted the court as saying in its order.

Vadra told the court that he wanted to visit the UK for taking an opinion on the treatment of “small tumor in the large intestine”. However, the ED opposed the application saying the medical condition was merely a pretext. It also said that Vadra was linked to alleged arms dealer Sanjay Bhandari who is in London.