The Central government blamed the Delhi government for creating a “complete mess,” regarding the acquiring of tankers and the distribution of oxygen to hospitals. 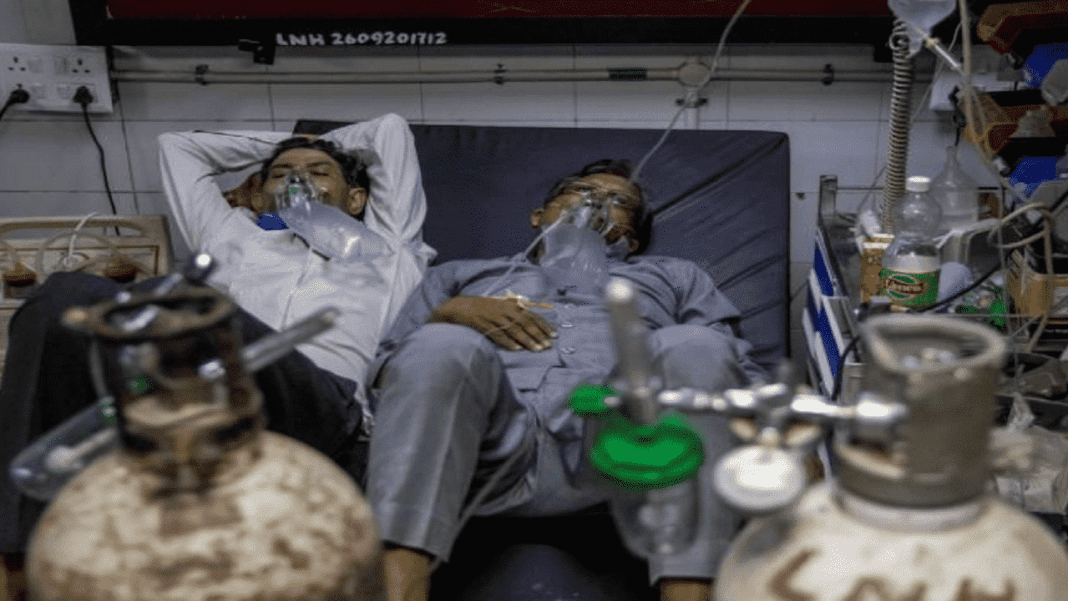 ILNS: The Central government and even the key company manufacturing oxygen, Inox Air, on Monday blamed the Delhi government for creating a “complete mess,” regarding the acquiring of tankers and the distribution of oxygen to hospitals, as the Delhi High Court resumed its daily hearing of the COVID-19 crisis in the Capital.

The allegations were made before the Division Bench of Justices Vipin Sanghi and Rekha Palli, by Senior Advocate Rajiv Nayar, speaing for Inox Air.

Before that, Solicitor General Tushar Mehta told the Court: “The current position is that fire-fighting on an hourly basis through a virtual control room is required to be done. It is not the end. The nature of the problem is such that dynamics might change.”

He said the states have responded positively. The SG also informed the Court that augmentation of oxygen supply continues on a war footing. Empty tankers are being lifted and special trains are being deployed. Then SG Mehta alleged that the Delhi government “has hardly arranged any tanker.” He said the Court should ask the government to take action in this regard.

Thereafter, SG Mehta read a letter by the Ministry of Health to all states. It said, “Rational use of oxygen is the need of the hour and Tamil Nadu and Kerala governments have implemented the same successfully.”

Referring to the letter, he said: “All states are directed not to come in the way of supplies allocated by the Centre.”

SG Mehta said: “One has to be given what is needed so that there is no wastage. The allocation has been done under the Supervision of Dr. V.K. Paul, Member (Health), NITI Aayog.”

Then SG Mehta shared Delhi CM Arvind Kejriwal’s letter to one of the suppliers. It said: “The state government can only procure tankers. Procurement of oxygen is only by the Centre as it’s on a national level.”

The Court clarified: “So this request can be considered to be a request for tankers and not oxygen-filled tankers?”

Senior Advocate Rahul Mehra, representing Delhi, said: “This letter is for the procurement of tankers.”

SG Mehta clarified, “Even the spares have to go to the Centre for adequate allocation.”

The Court then asked the Delhi government, “You’re given free hand to only procure tankers.”

Mehta pointed out a communication sent by Delhi government to suppliers. As per the letter, the Delhi government has asked the suppliers to show cause why action should not be taken against them for not following the High Court order.

“Yesterday, it was said by the Minister that hospitals are issuing unnecessary SoS. Mr Mehra should today clarify how long after a patient’s death shall we issue SoS? The bureaucratic machinery of the Delhi government has failed the citizens of Delhi,” added Dutta.

SG Mehta suggested the Delhi government to have a joint meeting with hospitals and suppliers. “There is enough oxygen, if distributed properly,” he added.

Advocate Alok Aggarwal for Maharaja Agrasen Hospital said, “The problem is, we are not aware of how much we will get and when. It would reduce the anxiety of hospitals. We can report to nodal officers. We can have only those patients that we can cater to. My people arrange a tanker. We sent messages saying we can assist… you allot to us what we want. There should be one person who would be responsible for facilitating transport of tanker for oxygen.”

SG Mehta proposed the Delhi government designate one officer for contact in case tankers are available with someone.

Central government officer Rasika Choubey said, “We maintain data in very granular form. The state governments have no need to go scouting for oxygen.” Mehta suggested that the Delhi Chief Secretary should join the proceedings.

Reading out the the order regarding allocation of oxygen to Delhi hospitals, Rahul Mehra said, “Due to the SoS, a lot of swapping is taking place. Inox has an entire chain in place, but since 50 percent is going to others, everyone is searching for tankers. Allocation is based on 490 MT, but actual supply is based on actual delivery. Suppliers may pick up oxygen from any other manufacturers as per the allocated amount.”

Siddharth Jain, Managing Director, INOX Air said, “We are more than willing to take on this national service. Yesterday, we located our tankers at Bhiwadi. Tankers were taken by the Government of Rajasthan and I’m unable to provide the service. Delhi allocation is going down and UP and Rajasthan are going up. All transport tanks are going there. I don’t have excess supply chain.”

The court said, “You don’t seem to be taking into account the established supply chains. They were supplying to Delhi. You’ve made it 85MT.” The court then asked the SG, “Why should their tankers be held up in spite of our order?”

The SG told Jain, “Criminal complaint can be registered, if someone stops your tankers. The Home Minister says treat the tankers as ambulance.”

The court said, “We fail to understand. We asked you to consider reworking allocation…all that was not done. Twenty-one lives have been lost.”

The SG said: “Not because of non supply by me.”
Court: “But not reaching Delhi.”
SG said: “It is not my job.”
The court said: “It is the job of both of you.”
The Court further said that once allocations are made, they will have to be workable too.

SG Mehta assured the court that strict action will be taken against those responsible for the holdup of tankers in Rajasthan. The court said: “We expect the Centre to use its power. There should be one officer for this purpose (unobstructed movement of tankers). Please put it on the website.”

“We’ll give it to suppliers. Putting on website creates a lot of problems,” SG Mehta said. The court thereafter said, “We have info that oxygen cylinders are being black-marketed.”

SG Mehra said, “We are apprehensive of that.” Returning to the issue of oxygen, Mr Mehra asked the Centre: “All we are asking is how much are you providing, to whom, what time and who is the driver?”

The court said that basic information is definitely called for. “When we are so pressed, if you increase paper work every two hours…twice a day should suffice.”
Mehra said: “We are receiving so many SoS calls.”

Court said: “Let it be twice a day…” Mehra said: “Driver’s number shall be shared.” At that the court asked whether the driver will be driving or receiving calls.

At that point, Delhi Chief Secretary Vijay Dev joined the proceedings. The court asked him: “The need of the hour is what is coming to Delhi, how is it being managed and distributed.”

Moving over to the testing issue, Justice Sanghi asked the status of RT-PCR, setup and conduct of tests.
The SG said that the Centre will call for a report as to “how many reports are pending and how many are cleared… I have nothing to hide.”

Justice Sanghi warned the SG: “People can call for this in RTI.”
SG said: “At a level, this is happening.”
Rahul Mehra said: “Mehta has apprehension for his department. Delhi government also has its apprehensions.”

Justice Sanghi said: “We are trying to help you.”
Justice Sanghi said: “The GNCTD has also called for more supply of gas. As far as distribution is concerned, this is being taken care of. Rasika Chaubey has stated that even their production and distribution is being monitored by the Central government and will soon share details on production and supply of oxygen. We therefore permit GNCTD to procure tankers for supply of oxygen. As far as the allocation of oxygen is concerned, the same shall be on the instruction of the Central government.”

The counsel for Maharaja Agrasen Hospital stated that there was a request for a tanker, but there was no response. Let the Delhi Chief Secretary look into such requests, he said.

Justice Sanghi said: Mr Jain, along with Mr Nayyar for INOX, is a major oxygen supplier of Delhi according to the allocation made by Central Government. There was an intervention from Rajasthan for supply of oxygen. Mehta has assured that the hindered tankers will be released, so that they can proceed to their destinations. Rajasthan to honour direction of the Central government and it would endanger hundreds of human lives.”

Justice Sanghi added: “The other aspect is the supply by INOX. Mehra informed that the requirements of the nursing homes has been worked out on the basis of allocation. Compliance required to be made every two hours with number of tankers and name of the driver, etc.”

“There shall be an ease of paperwork for easy supply of oxygen. Chief Secretary is directed to hold a meeting at 5 PM today and the resolution shall be placed before this court by tomorrow,” the judge added.

“Another aspect is the black-marketing of oxygen. Mr Mehra submitted that the refilling suppliers are not providing details on refilling. We direct all the refillers to be present before the court tomorrow and comply with the order of the GNCTD.”

“We direct all refillers to supply all the oxygen on the direction of GNCTD and all the supplies, they shall be accounted for. The GNCTD is in the process of procuring more tankers and the supply, in accordance of the allocation order. Tomorrow, we’ll take the matter for other issues,” added the Bench.