Above: The recent verdict is a boon for senior citizens who are often ill-treated by their children and daughters-in-law/Photo: Fayeza Pathan

The Delhi High Court has ruled that elderly parents can throw out their children from ancestral property, dismissing the plea of a daughter-in-law that she cannot be evicted

For senior citizens who are often subjected to ill-treatment by children or daughters-in-law, there is finally a ray of hope. The Delhi High Court recently upheld a judgment, aimed at the welfare of the elderly, and ruled that parents can seek eviction of their legal heirs from even the ancestral property on grounds of ill-treatment.

The Maintenance and Welfare of Parents & Senior Citizens (MWPSC) Act, 2007, is a central law which governs the welfare of senior citizens. Sec­tion 23 of the Act makes it amply clear that in case of a property transferred by a senior citizen on the condition that the transferee shall provide basic amenities or look after him/her or provide main­tenance, the said transfer will be­come void if the latter fails to discharge his responsibilities.

The law was already settled on the point that the property reverts to the senior citizens in case of ill-treatment or refu­sal to look after them. It was also established that parents can seek eviction from the said property which had been transferred.

The Delhi High Court added another dimension to the existing law and held that senior citizens can seek the eviction of their children and legal heirs from even the ancestral property or a self-bought property.

The case came to light when a bench of Chief Justice Rajendra Menon and Justice VK Rao pronounced a judgment while hearing an appeal against a single-judge bench order delivered on July 18. In that order, the Court had held that the daughter-in-law must vacate the first floor of the house. The daughter-in-law appealed against this judgment on the grounds that the Delhi Maintenance and Welfare of Parents and Senior Citizens (Amendment) Rules allow a senior citizen to seek eviction of his son, daughter or his legal heirs for ill-treatment, but the same rules don’t extend to the daughter-in-law.

The bench dismissed this claim, saying if allowed it would only “debilitate” the veracity of the rules formed for the protection and welfare of senior citizens. 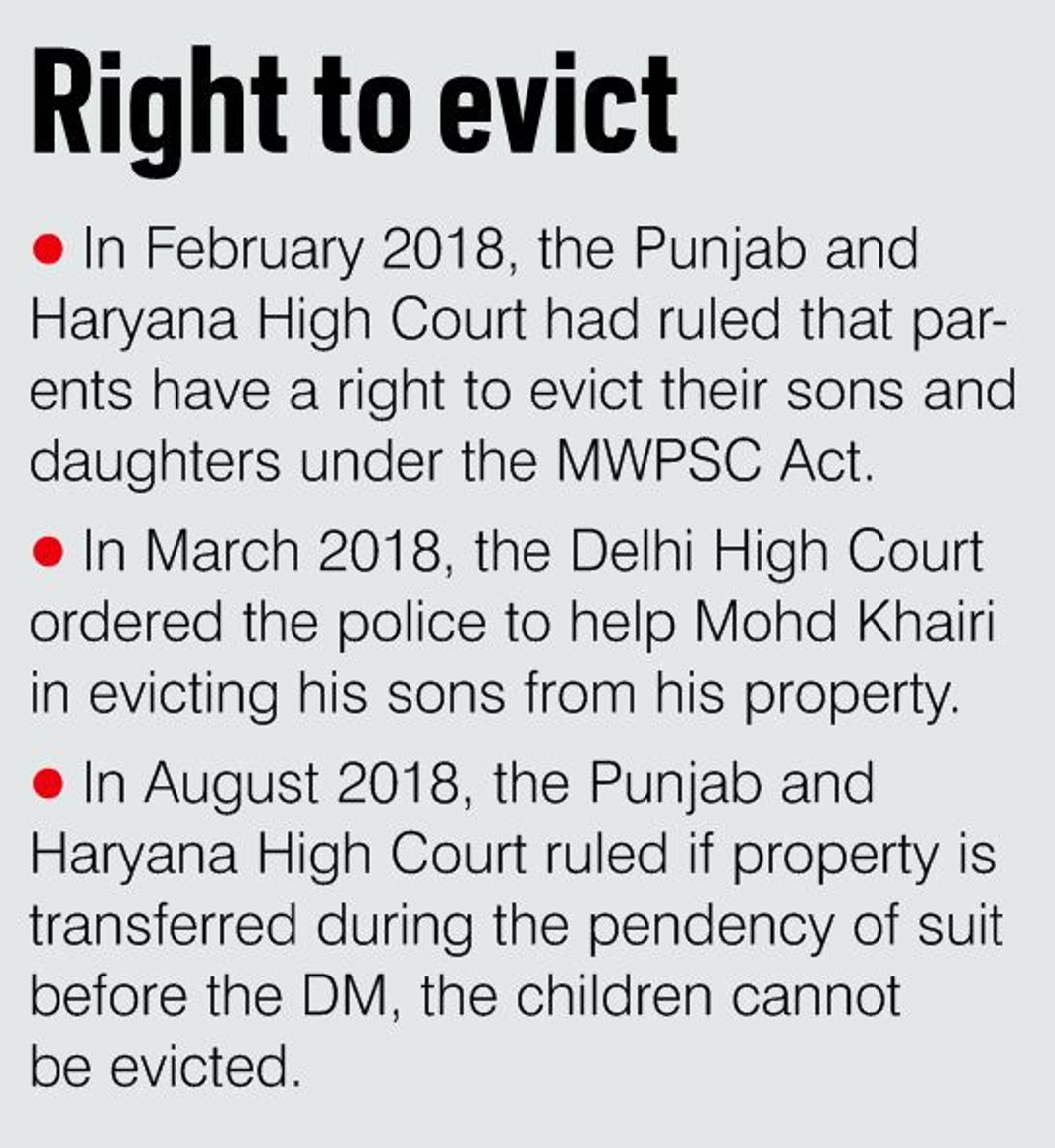 The daughter-in-law, Darshna, had been living with her in-laws for the past several months but was far from cordial in her relations with them. She is separated from her husband who had filed for divorce, but continued to live with her in-laws, claiming maintenance under Section 125 of the CrPC. She has also slapped cases of cruelty against her in-laws which are pending in court.

Taking note of the serious allegations, the bench mentioned that in the previous order it was recorded that the daughter-in-law used to mistreat her in-laws and used bad language, and on occasion, even spat on them. Her actions were also caught on CCTV which the judges said was evidence enough to nail her.

The daughter-in-law’s claim that eviction was not maintainable was also dismissed by the bench, citing another judgment pronounced on the same day. The Court held that it is not necessary for senior citizens to file for maintenance in order to seek eviction. The  bench, while concurring with the single-judge bench, ruled that the daughter-in-law “has no right, title and interest in the premises and, therefore, cannot insist on residing with Dhani Ram and his wife especially when the relationships between the said parties have deteriorated to the extent it has.”

The case had its origins in the Tribunal formed to handle cases of such nature where the judgment of eviction was pronounced and subsequently upheld by the single-judge bench and finally came up as an appeal before the division bench of the High Court. The Tribunal, the single-judge bench and the division bench all came to the same conclusion—the daughter-in-law should be evicted from the house of her in-laws.

Situations such as these where senior citizens/parents are unattended to and left to their own fate have triggered a debate in legal and government circles whether the law of the land needs to be more strict or not. Consequently, the MWPSC was enacted in 2007 to provide a legal framework regarding the issue of maintenance to parents.

The purpose of this Act is to provide maintenance to elderly parents and senior citizens. The Act establishes a Maintenance Tribunal to ensure speedy and effective relief to the elderly.

The Act also makes it mandatory for the establishment of an old-age home in every district and provision for the protection of life and property of the elderly.

The earlier stand of the law on maintenance was a general one, where under Section 125, CrPC, maintenance could be claimed by a dependant. But the current law is focused on elderly parents who are left stranded by their children, without any property or any person to take care of them.

The law mandates that any person who is responsible for the protection and care of a senior citizen and intentionally abandons the senior citizen is liable to pay a fine of Rs 5,000 or be imprisoned for three months, or both. The purpose of this law is to make the abandonment of senior citizens, whom a person is legally bound to take care of, a criminal offence.

In an earlier judgment, in February this year, the Delhi High Court had empowered the Maintenance Tribunal to pass orders for the eviction of sons and daughters on grounds of ill-treatment of parents. The Court had stated that the Act is “for the welfare of parents and senior citizens and for protection of their life and property, and therefore leave[s] no manner of doubt that the Maintenance Tribunal constituted under the Act has the power and jurisdiction to render the order of eviction”. While dismissing the present appeal, the Court said: “Keeping in view the objective of the Act, it is high time that senior citizens/parents are allowed to live in peace and tranquility. Thus, the orders passed by the Maintenance Tribunal and the learned Single Judge cannot be faulted.”

The judgment comes as a boon for elderly citizens and parents who live as dependants of their children and will certainly make them feel more secure and give them a feeling of being a part of an inclusive society.