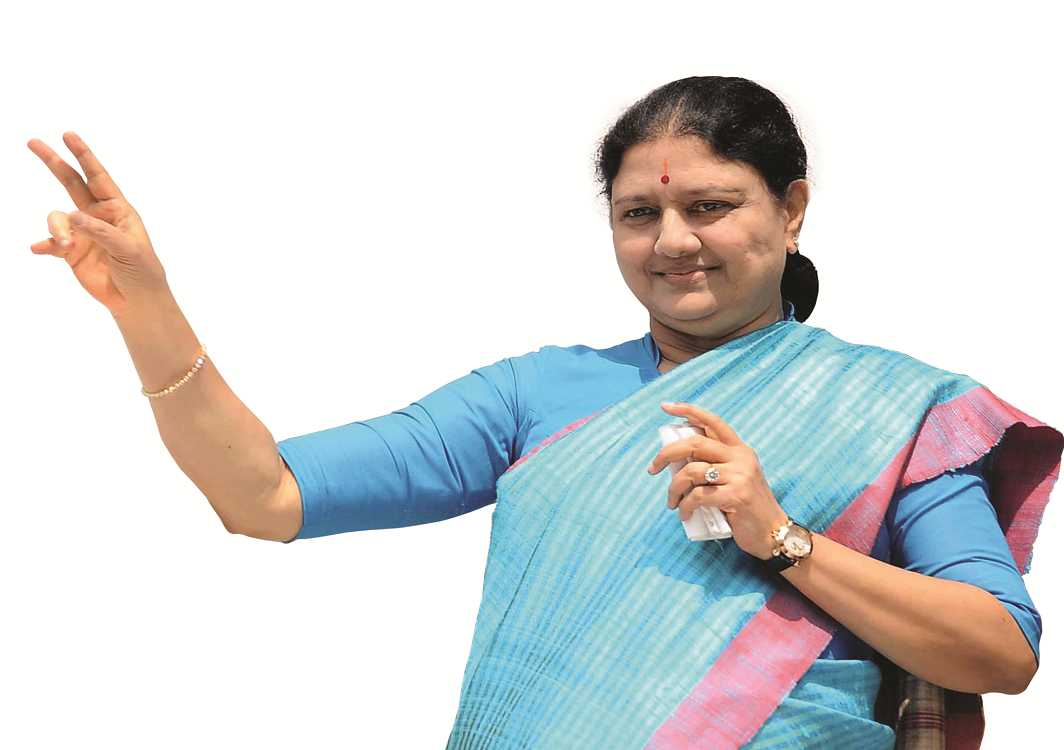 Above: VN Sasikala, general secretary of the AIADMK. Photo: UNI

~By Ramasubramanian in Chennai

At a time when everything seemed to be going against her, on July 29, the Supreme Court gave a temporary relief to VN Sasikala, the general secretary of the AIADMK. An apex court bench of Chief Justice JS Khehar and Justice DY Chandrachud dismissed a petition asking it to issue a direction to the Election Commission to decide on a representation seeking to bar her from heading the party.

The petition was filed by an Aam Aadmi Party leader from Tamil Nadu, SAN Vasigaran. Sasikala is presently serving a four-year jail term in Parapanahara prison in Bangalore after the apex court found her guilty in a disproportionate assets (DA) case. The case was filed against the late chief minister, J Jayalalithaa, in 1996 and Sasikala was the second accused in the case. Two of Sasikala’s relatives were also convicted and sentenced to a similar jail term.

The main argument of the petitioner was how could a person disqualified under the Representation of the People Act (RPA) lead a political party which had 135 MLAs and 50 MPs. The petitioner asked whether such a person could decide the voting decisions of its party’s representatives in the assembly and in parliament by virtue of her leadership of the party outside the House. Luckily for Sasikala, the bench was unconvinced and dismissed the petition, saying that the post of general secretary of a political party was not a public office, let alone an elected office. 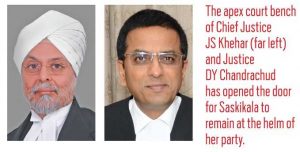 One needs to understand the history of the whole issue to put this in perspective. After Jayalalithaa’s death on December 5, 2016, O Panneerselvam took over as CM with a 32-member cabinet. Sasikala was elected as interim general secretary of the AIADMK on December 29, 2016. Things went smoothly till February 5, 2017, when AIADMK MLAs at a hurriedly called meeting elected Sasikala as their legislative party leader. This meant that she would take over the CM’s post. Immediately, Panneerselvam sent in his resignation and it was accepted. But on February 7, Panneerselvam changed his mind and around 9 pm that day, he went to the samadhi of Jayalalithaa, and meditated for half-an-hour.

After that, he dropped a bombshell. Talking to the media, he said: “I was pressurised by Sasikala’s family members to resign and thus pave way for the anointment of Sasikala to become the next Chief Minister. If given a chance, I will withdraw my resignation.” For the next one week, Tamil Nadu was in turmoil.

After the Supreme Court’s verdict in the DA case on February 14, the situation started stabilising. On February 15, Sasikala and two others surrendered and were locked up in Parapanahara jail. But Panneerselvam could not become the CM because 122 AIADMK MLAs in the 234-member assembly elected Edapadi Palanisami as their legislature party leader and he became the CM on February 16. Palanisami was Sasikala’s choice.

But trouble started when the EC decided to conduct a by-poll for the RK Nagar assembly constituency in Chennai which fell vacant after Jayalalithaa’s death. Both the AIADMK factions fielded their candidates and approached the EC to allot the party’s “two leaves” symbol to their faction. After hearing them, the EC froze this symbol on March 22 and stated that it needed time to decide on the issue.

Meanwhile, Sasikala’s very selection as AIADMK general secretary was challenged in the EC. On January 6, 2017, former AIADMK MP KC Palanisami filed a petition before the EC. He said: “AIADMK by-laws are very clear in the selection of general secretary. One can become general secretary through a party election in which all 1.5 crore basic members vote. Both MG Ramachandran who launched the party and Jayalalithaa became general secretaries after dates were fixed for this election. But not once were elections held because after the election dates were announced, thousands of party cadres filed their nominations on behalf of MGR till his death in December 24, 1987. The story was followed in Jayalalithaa’s case too. Jayalalithaa would announce the process of election in the party’s official organ, Dr Namadhu MGR, and thousands of cadres would file their nominations in support of her. This is the age-old practice in the AIADMK and not once has there been a full-fledged election where all 1.5 crore members vote to select the general secretary. But in this case, the practice of releasing an announcement in the party’s organ was not followed and that is why I have filed my petition in the EC.” Another major hurdle for Sasikala to continue as general secretary is a specific by-law of the party. E Madhusudanan, one of the founders of the party and now in Panneerselvam’s camp, said: “In 1977, MGR inserted a by-law which said that if anyone wants to contest for any post in the party, i.e from a panchayat-level party secretary to general secretary, he should have been a basic member of the party for five years without a break. But Sasikala was suspended from the AIADMK on December 19, 2011, by then party general secretary Jayalalithaa. Sasikala rejoined in March 2012 and was re-inducted into the party on March 31, 2012 and made general secretary in December 2016. As five years have not been completed, Sasikala cannot become a general secretary of the party.”

Sasikala in her defence said that as the disciplinary proceedings were cancelled, it would mean that her original membership was restored and she enjoyed five years of uninterrupted party membership. One of Sasikala’s supporters said that she was appointed as interim general secretary. She said they had a legal strategy to counter their enemies and ensure that Sasikala continues as general secretary.

Meanwhile, Sasikala’s nephew TTV Dinakaran too has started his political games. His main enemy is Chief Minister Palanisami. Before going to jail, Sasikala appointed Dinakaran as deputy general secretary of the party. Dinakaran was arrested by Delhi later on allegations of trying to bribe EC officials to allot the party’s symbol to the faction led by Sasikala.

He was granted bail by a Delhi court recently and faces three FERA cases. He has the support of at least over 30 MLAs, say party insiders.

The coming months will be interesting in the state’s political landscape. A senior BJP leader in Tamil Nadu said: “That is why the BJP high command and especially Prime Minister Narendra Modi are continually trying to unite both factions of the AIADMK. Its 50 MPs will be on the BJP’s radar and interestingly, both factions voted in support of the BJP’s candidate in the recently concluded presidential elections.” This shows which way the party is likely to be moving ahead.

Meanwhile, there have been reports that AIADMK will join the ruling NDA at the center and a few of its MPs would be inducted into the union cabinet. “The BJP is keeping in mind the 2019 Lok Sabha elections and it is but natural that the saffron party, which enjoys just 2.5 percent vote share in the state, will want to keep on its side the AIADMK because of its 40 percent voter support,” said another BJP leader.