After hearing the Counsel, the Court observed that it is not being alleged against the Jugraaj that he had caused any injury to the policemen on duty or had assaulted the policemen on duty though he is seen resisting policemen from preventing him and other members of the unlawful assembly from entering the Well of the Red Fort. 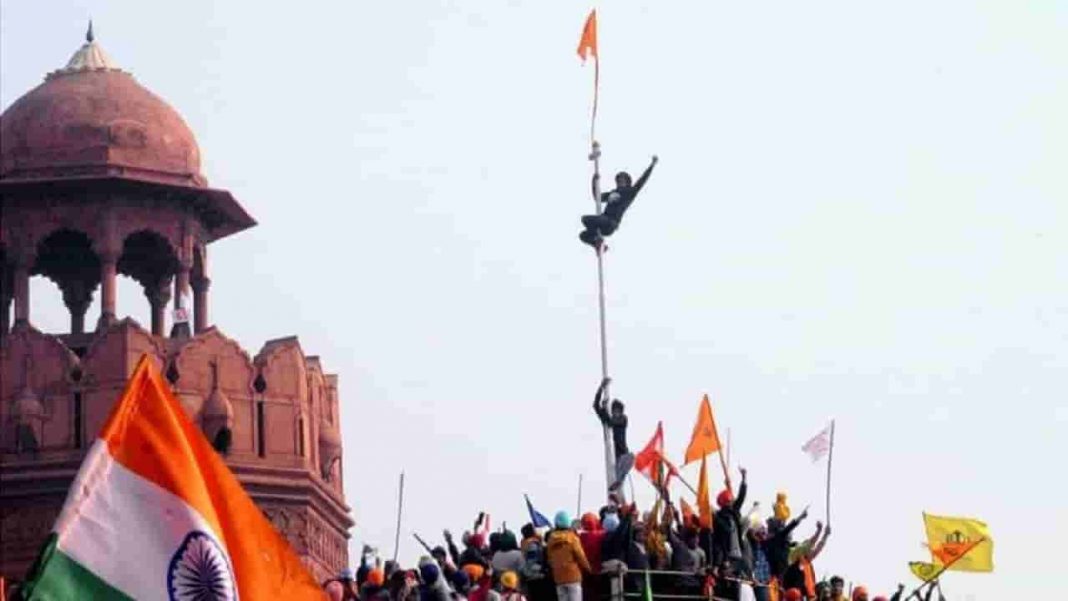 Singh’s counsel contended that police has canvassed the case against him on the basis of video clippings/ CCTV footage etc., and does not state that accused has been identified by any independent witnesses in the clippings/ footage. Jugraj Singh is implicated only on the basis of identification by co-accused which is not admissible in law. It is not understandable how hoisting Nishan Sahib has caused embarrassment and humiliation to the people of this country. Moreover, co-accused Sandeep Singh Sidhu has already been granted bail, the counsel added.

The Additional Public Prosecutor contended that despite specific orders of appropriate authorities, on January 26, 2021 at around 12.15 pm, an unruly mob of 1000-1200 persons on 40-50 tractors, 125-150 motorcycles and in private vehicles reached Shanti Van red light trying to break barricades and Red Fort.

The accused/ Jugraj Singh  was part of the unruly mob and that he is the person who had hoisted the religious flag on the ramparts of the Red Fort on 26.1.2021, and that in one of the video footage, he is clearly seen climbing the flagpole in Red Fort and hoisting Nishan Sahib in the presence of other co-accused persons. In one video footage, he is seen carrying a sword, in another when the police is trying to stop the mob, from entering the wells of the Red Fort he is seen pushing policemen, and is clearly seen entering the Red Fort from the Lahore Gate with the unruly mob.

After hearing the counsel, the Court observed that it is not being alleged that Jugraj had caused any injury to the policemen on duty or had assaulted the policemen on duty, though he is seen resisting policemen from preventing him and other members of the unlawful assembly from entering the well of the Red Fort. Offence u/s 30 of the Ancient Monuments and Archaeological Sites and Remains Act, 1958, is made punishable with imprisonment up to two years, offence u/s 353 IPC is punishable with imprisonment up to two years and u/s 188IPC, maximum prescribed is up to six months of imprisonment.

The Court relied on the order of the Supreme Court of India on 7.5.2021, in the Suo Motu Writ Petition, IN RE: CONTAGION OF COVID VIRUS IN PRISONS, taking stock of the prevailing situation arising from the unprecedented surge in and spiralling cases in the second wave of COVID-19 pandemic in order to limit fresh arrests in contravention of the directives issued in the Judgement of Arnesh Kumar vs. the State of Bihar has called for strict adherence to the same reminding the authorities concerned that an arrest in contravention would tantamount to Contempt of Court. The Supreme Court of India in Arnesh Kumar v. State of Bihar &Anr. Crl. on 02.07.20104, had issued specific directives attending arrests of accused in cases pertaining to an offence under Section 489A IPC and extended to all offences made punishable with imprisonment up to seven years.

In light of which, the Court granted interim protection  to accused Jugraj Singh at this stage till the next date of hearing, subject to the condition hat the accused shall join investigation “and as and when called upon to do so by the respective IO’s. The IO shall intimate the dates on which his presence shall be required besides the ones mentioned in the present order by written notice affording him reasonable opportunity to travel from hometown to Delhi in the prevailing pandemic situation of restricted movements and lockdowns announced by respective State Governments,” the order reads.

The judge has fixed the matter for July 20 for further consideration.