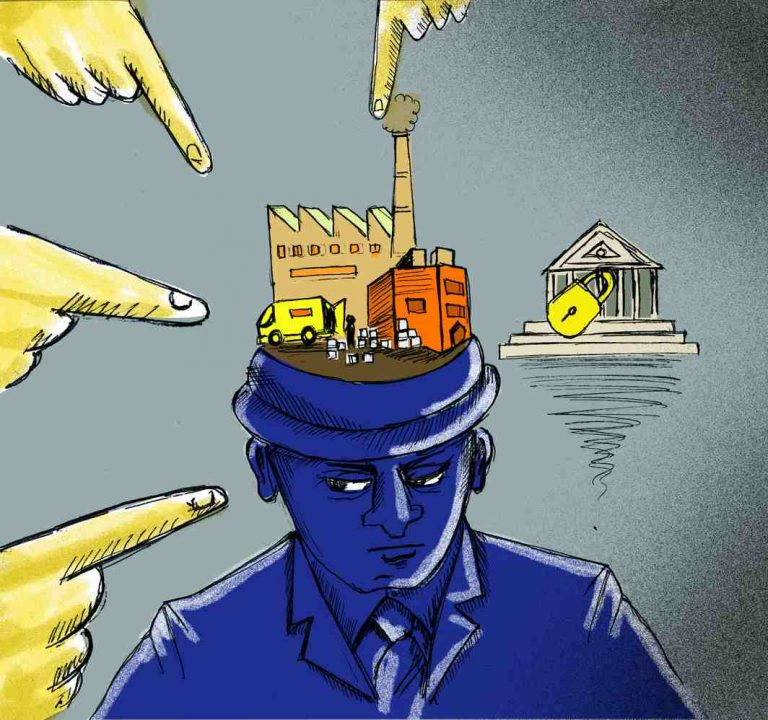 The economic bustle which the Narendra Modi government had wanted to see has taken a hit. This was evident in the banking sector, where the non-performing assets (NPAs) of some banks, especially public sector ones, have grown alarmingly. One estimate put the total figure of NPAs, including public and private sector banks, at Rs 6,97,409 crore in December 2016.

While the BJP-led NDA government has been on top of the game as far as politics is concerned with its tremendous win in the Uttar Pradesh assembly elections in March, there is the nagging awareness that this is not so for the economy. A major reason for this sorry state of affairs is NPAs, the dirty heap of debt which is causing a stink in the economy. Something had to be done.

The government found a way out. It decided to use the Insolvency and Banking Code (IBC), which was passed last May, to tackle it. One of the ways of clearing the debt is to declare that the companies which have piled up NPAs are not in a position to repay. They have to be declared insolvent and bankrupt. In one way, it is writing off the debt. But doing so would send out a bad message —that companies can borrow freely from banks and if they can’t pay it back, the debt would be written off. The IBC is the legal and commercial way of writing off debt. It means that debtor companies will have to face the humiliation of being declared insolvent and bankrupt. There is a legal procedure to do this and it is good for debt-ridden banks as well as defaulting companies to go through the ritual commercial funeral. Some pop sociologist may describe this capitalist caper as material, if not emotional, catharsis. But it is an effective way of clearing the mess.

With the government choosing this route, there has been uncharacteristic quickness by the finance ministry and the Reserve Bank of India to deal with these NPAs. On May 4, the ministry issued the Banking Regulation (Amendment) Ordinance, 2017, which empowers the central bank to issue necessary directions to banks to deal with the NPAs. The ministry noted that “the stressed assets in the banking system have reached unacceptably high levels and urgent measures are required for their resolution…”  It also stated in unambiguous language what it wanted the RBI to do in Section 35AA: “The Central Government may by order authorise the Reserve Bank to issue directions to any banking company or banking companies to initiate insolvency resolution process in respect of a default, under the provisions of the Insolvency and Bankruptcy Code, 2016.”

The RBI responded on May 22. It had expanded the two-member Oversight Committee appointed by the Indian Banking Association and to work out ways “to resolve the large stressed assets in the banking system in a value optimising manner”. It seems that the RBI is still looking for ways to restructure the debt.

How insolvency cases play out

The National Company Law Appellate Tribunal (NCLAT) dealt with two cases involving private bank ICICI and defaulting company Innoventive Industries Ltd in one and Starlog Enterprises Ltd in another. Both were disposed of by NCLAT in May.

While ICICI lost the first case, it prevailed in the other. This shows that once insolvency proceedings are initiated, it remains open for any one of the parties—creditors (ie, lenders such as banks) or debtors (companies unable to repay loans)—to go to court and raise questions about the fair implementation of the Insolvency and Bankruptcy Code (IBC).

In the Innoventive Industries Ltd v ICICI Bank and others, NCLAT ruled on May 15 that there was no need for the National Company Law Tribunal, Mumbai bench, to have given notice to Innoventive Industries after ICICI Bank had filed a case under the IBC. All that the Tribunal had to do was to satisfy itself that the failure to pay debt was established through documentary evidence. The company also invoked an earlier debt restructuring agreement under the Maharashtra Relief Undertaking (MRU) Special Provisions Act 1958 to prevail over the IBC. NCLAT rejected the argument outright.

NCLAT said that though formal notice was not given to Innoventive Industries Ltd after ICICI Bank had filed a petition under the IBC, NCLT had heard the objections of the defaulting company. Therefore, the formality of issuing a notice is not mandatory. But it sounded a cautionary note: “However, in some of the cases initiation of Insolvency Resolution Process may have adverse consequences on the welfare of the Company. Therefore, it will be imperative for the adjudicating authority to adopt a cautious approach in admitting Insolvency Application by ensuring adherence to the principle of natural justice.”

On the issue of the state law—MRU Act—prevailing over IBC, the Court said: “The protection under the MRU Act, therefore, cannot be extended to other legislations especially to union legislation which is subsequent to the MRU Act and related to insolvency resolution i.e. I&B Code, 2016.”

It is to be noted that ICICI Bank had filed its initial application against Innoventive Industries in January, the Mumbai bench of NCLT gave its verdict in the same month and NCLAT disposed of the appeal in May. This was quick considering the tortuous procedure and time taken for regular litigation. Of course, the implementation of insolvency is sure to take more time.

In the second case of Starlog Enterprises v ICICI Bank, NCLAT penalised the Bank for giving the wrong figure of the debt amount and dismissed the ex-parte order of the Mumbai bench of NCLT. The Tribunal order was given on February 17 and the appellate tribunal set it aside on May 24.

NCLAT asked ICICI Bank to pay a fine of Rs 50,000 for the incorrect claim. The appellate tribunal accepted the objection of Starlog Enterprises about the discrepancy in the amounts demanded by the Bank. In its notice to the company on February 6, the Bank stated that the amount due was Rs 10,02,28,271.60, while in the application it filed before the NCLT on February 8, it stated that the due amount was Rs 29,81,02,395.62. The appellate tribunal took strong objection to the “incorrect claim”.

The central bank had made a beginning to resolve this issue on June 13 when its Internal Advisory Committee (IAC) recommended that 12 accounts which owed more than Rs 5,000 crore each to banks, 60 percent of which is bad debt, would have to be referred to insolvency proceedings. The June 13 RBI press note significantly notes: “The Reserve Bank of India, based on the recommendations of the IAC, will accordingly be issuing directions to banks to file for insolvency proceedings under the IBC in respect of the identified accounts. Such cases will be accorded priority by the National Company Law Appellate Tribunal (NCLAT).”

Despite the urgency shown by the finance ministry and by the RBI, things may not have moved as quickly as desired. The fast-tracking of NPA cases may not prove to be easy. The IBC is yet to take root as it requires technical expertise in the form of interim resolution professional (IRP), as well as due process. It may be much less than a protracted legal processes in a regular court of law, but there is no way that a procedure that gives a sense of fair play can be pushed aside.

On June 15, the Insolvency and Bankruptcy Board of India (IBBI) notified the Insolvency and Bankruptcy Board of India (Fast Tract Insolvency Resolution Process for Corporate Persons) Regulations, 2017. The IBBI note said: “These regulations provide the process from initiation of insolvency resolution of eligible corporate debtors till its conclusion with approval of the resolution plan by the Adjudicating Authority. The process in these cases shall be completed within a period of 90 days, as against 180 days in other cases.” 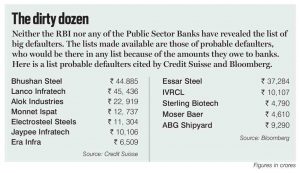 If the adjudicating authority decides to give extra time, it might do so by extending it by 45 days. There is a catch here. If the IRP (Internal Resolution Person Professional—he will look at the accounts of the defaulting company and come up with the strategy to go forward) feels that the case need not be put on the fast track, then he can recommend to the adjudicating authority that it can be dealt with as an ordinary case. Of course, when the RBI decides that the 12 cases it has identified should be put on the fast track, there may not be any further legal hurdles. But the procedures laid down in the IBC will have to be followed. (See Box)

A glimpse at how insolvency cases play themselves out can be had by looking at the disposal of cases by the National Company Law Appellate Tribunal (NCLAT). It has dealt with 20 cases which have been brought by private sector players in these six months. Sixteen of the 20 have been decided in May alone. And these are appeals which have been decided by National Company Law Tribunals benches in Ahmedabad, Allahabad, Chandigarh, Coimbatore, Delhi, Kolkata and Mumbai.

The moot question is whether the insolvency law will facilitate the quicker resolution of bad debts. The government is keen to try it out and has asked the RBI to use the IBC. It’s a wait-and-watch game now.