The Delhi High Court has sought a response from the centre on a plea which claims that despite being outnumbered in several states, the Hindus are denied rights enjoyed by other minority groups. By Ananthu Suresh

According to the 2011 census, there were fewer Hindus than followers of other faiths in the states of Punjab, Nagaland, Mizoram, Meghalaya, Manipur, Arunachal Pradesh, Lakshadweep and the Union Territory of Jammu and Kashmir. Hindus, therefore, should be regarded as the minority in these states and granted the advantages enjoyed by minorities. This was the plea filed by BJP leader Ashwini Kumar Upadhyay in the Delhi High Court seeking minority status for Hindus in these states.

Upadhyay had earlier moved a similar plea in the Supreme Court but in December last year, the apex court dismissed the petition while giving him the liberty to approach any other court or appropriate forum. According to Upadhyay, his petition was prompted by the refusal of the National Commission for Minorities, which he had approach­ed, to define minority and grant the status to Hindus in these states. A division bench of Chief Justice DN Patel and Justice C Hari Shankar has sought a response from the ministries of home affairs, law and justice and minority affairs on the plea. 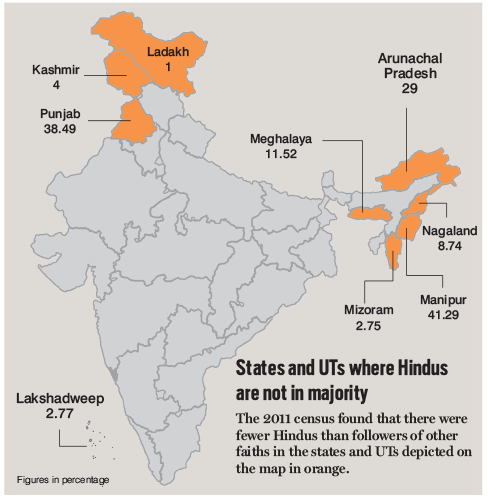 His main grouse is that even though Hindus are the minority in these states, the rights that ought to have been theirs are being siphoned off illegally and arbitrarily to the majority population as the centre and governments in these states have not notified them as ‘minority’ under Section 2(c) of the National Commission for Minorities Act, 1992. Says Upadhyay: “By not notifying them as a minority in these states, they have been deprived of basic rights under Part III of the Indian Constitu­tion.

The denial of minority rights to real minorities and arbitrary and unreasonable disbursement of minority benefits to majority, infringes upon fundamental right to prohibition of discrimination on the grounds of religion, race, caste, sex or place of birth [Article 15(1)]; impairs the right to equality of opportunity in matters related to public employment [Article 16(1)]; and freedom of conscience and right to freely profess, practice and propagate religion [Article 25(1)]. It also erodes the obligation of the State ‘to endeavour to eliminate inequalities in status, facilities and opportunities’ [Article 38 (2)]”.

The petitioner also stated that even though Christians are in majority in Mizoram, Nagaland, Meghalaya and they form a significant chunk of the population in Kerala, Goa and some states, but they are treated as a minority. Similarly, Sikhs are a majority in Punjab and their numbers are significant in Delhi, Haryana, and Chandigarh, yet they are treated as minorities nationally. He thus sought quashing of the Notification on Minority Community dated October 23, 1993, as invalid and ultravirus of the Constitution.

Upadhyay further contended that the “Prime Minister’s 15 Points Programme meant for religious and linguistic minorities is not being appropriately used, particularly in Arunachal Pradesh, Assam, Goa, Jammu & Kashmir, Kerala, Lakshadweep, Manipur, Meghalaya, Mizoram, Nagaland, Punjab, Tamil Nadu, Uttar Pradesh, and West Bengal. Hindus’ legitimate share is being siphoned off arbitrarily to unqualified sections of the population, because of non-identification and non-notification of minorities at the State level. Although, it is the duty of the Government to identify and notify religious and linguistic minorities at State level so as to safeguard the rights of minorities guaranteed under Articles 25-30”.

According to Upadhyay, it was unjust that the Union Government offered 20000 scholarships in the field of technical education for minority students. “In J&K, Muslims are 68.30% and government allotted 717 out of 753 scholarships to Muslim students but none to Hindu students”. Yet another point raised by Upadhyay was that the expression ‘minority’ has been used in Articles 29 and 30 of the Constitution but it has nowhere been defined. The Preamble of the Constitution proclaims to guarantee every citizen’s liberty of thought, expression, belief, faith, and worship’. Articles 25 to 30 guarantee protection of religious, cultural and educational rights to both majority and minority communities.

It appears that keeping in view the constitutional guarantees for the protection of cultural, educational and religious rights of all citizens, it was not felt necessary to define minority. As understood from the constitutional scheme, minority signifies an identifiable group of people or community who were seen as deserving protection from likely deprivation of their religious, cultural and educational rights by other communities who happen to be in majority and likely to gain political power in a democratic form of government based on election.

In the background of the constitutional scheme, the provisions of the Act, therefore, instead of giving a definition of ‘min­ority’, only provide for notifying certain communities as ‘minorities’ who might require special treatment and protection of their religious, cultural and educational rights. The definition of ‘minority’ given under Section 2(c) is in fact not a definition but only a provision enabling the central government to identify a community as a ‘minority’ which in the considered opinion of the government deserves to be notified for the purpose of protecting and monitoring its progress and development.

The petitioner also cited several landmark cases where it was held by the apex court that the unit for determining the status of both linguistic and religious minorities would be the state. Upadhyay’s petition has been given a thumbs-down by the min­orities commission and the apex court. His latest before the Delhi High Court shows he is not one to give up.