By transferring upright SPs of four districts, the state government has not followed the apex court guidelines which say that IPS officers should have a fixed two-year term in field postings

In violation of Supreme Court guidelines stipulating a fixed two-year tenure for IPS officers all over India on a field posting, the Madhya Pradesh government has prematurely transferred some of them. In the last four months, SPs of four districts—Balaghat, Jhabua, Bhind and Katni—have been transferred under political pressure. This has led to protests as these officers were seen as honest and diligent.

In 2006, the Supreme Court, based on a petition by former DGP Prakash Singh, directed the centre and states to set up Police Establishment Boards to decide selection, promotions and transfers of police officers and other staff till the governments came up with an appropriate legislation. In October 2013, the Union government sought to tweak this rule through a set of amendments but the Court rejected the move. 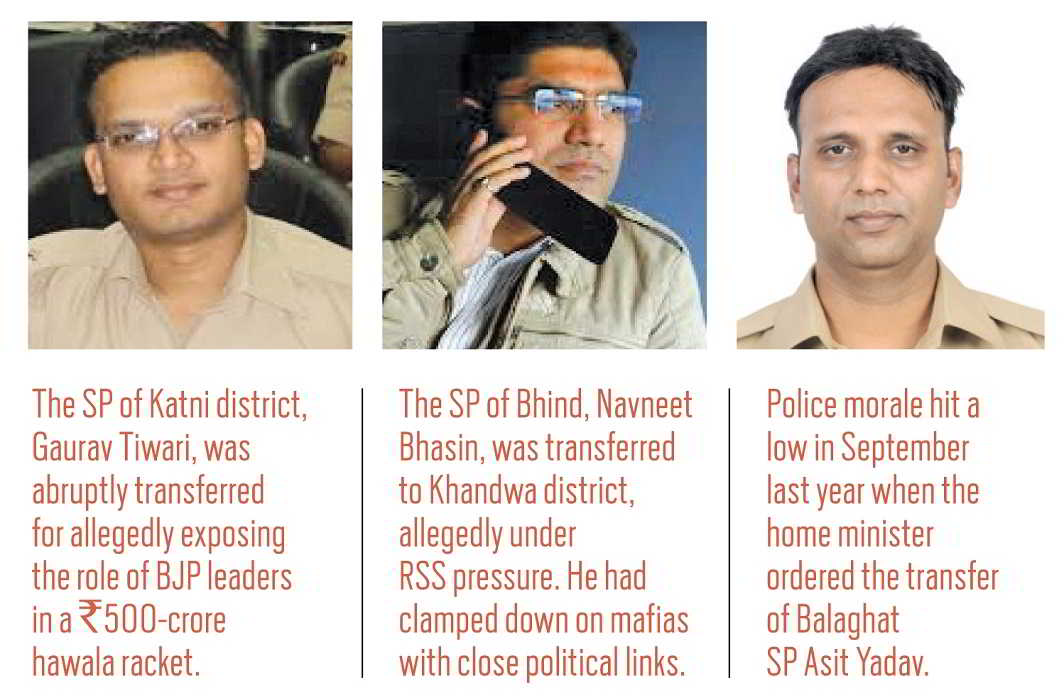 Following the SC guidelines, the Madhya Pradesh government formed a Police Transfer Board (PTB) with the director-general of police, principal secretary, home and secretary, home as its members. The Board’s stated objective was to insulate the transfers and postings of field officers from political pressure and ensure a two-year stint for SPs. It was empowered to seek justification from the administrative department for premature transfers, obtain the views of the officer who would be transferred and not recommend it unless satisfied with the reasons. However, this was bypassed by the state government as seen in the premature transfers of SPs.

On January 9, the SP of Katni district, Gaurav Tiwari, was abruptly transferred for allegedly exposing the role of BJP leaders in a Rs 500-crore hawala racket. Tiwari, a 2010 batch IPS officer, had barely completed six months in Katni before the state government shifted him as SP, Chhindwara. Soon after taking charge in Katni, Tiwari had constituted a Special Investigation Team to investigate complaints of massive hawala operations through fake bank accounts. The SIT detected nearly 100 bogus accounts of industrialists, coal traders and mining barons. Subsequently, the income tax department stepped in to assist the investigation under its nationwide operations to identify illegal bank deposits post-demonetisation. The joint investigations yielded sensational information—over Rs 500 crore was deposited in fictitious accounts in various bank branches in Katni, a business hub 400 km east of Bhopal. Many of these accounts were opened in the name of employees of these bigwigs.

Investigations revealed a greater rot. After arresting and interrogating employees of Manish and Satish Saraogi, coal traders, the SIT allegedly also discovered the involvement in the hawala racket of Sanjay Pathak, the state minister for micro small and medium enterprises. However, before Tiwari could interrogate them, he was transferred to Chhindwara. No reason was assigned.

Chief Minister Shivraj Singh Chouhan termed it as a routine administrative exercise. He also said the SP had exceeded his brief as investigation of hawala transactions was not the police’s job. State BJP president Nand Kumar Singh Chouhan too asserted that it was the state government’s prerogative to transfer a police officer, regardless of whether he was in the post for six months or less.

Members of the PTB justified this transfer saying that if an officer is moved from one field posting to another, then, as per the SC guidelines, it is not mandatory to give reasons for it. Reasons need to be given only if an officer is taken off field duty, they said.

Significantly, a day after Tiwari’s transfer order, a member of the PTB and principal secretary, home, Seema Sharma, was transferred to the general administration department. She was reportedly against Tiwari’s transfer. Director-general of police RK Shukla too was opposed to the move—he had called Gaurav Tiwari the “pride of the police force”—but yielded when the government transferred Tiwari to another field posting, said sources.

Incidentally, Tiwari was shunted out of his previous posting too as Balaghat SP before he had completed his term. This time, his investigation into timber smuggling and illegal felling of forests revealed the alleged involvement of then collector of the district. The IAS lobby had moved against him.

His transfer now to Chhindwara has created quite a storm in Katni where he was popular due to his fearless stance and direct connect with the people. They protested and demanded revocation of the transfer order. Unrest also grew following media reports that Nand Kumar Singh Chouhan’s son Harsh Chouhan was a business partner of Pathak. The minister, incidentally, defected to the BJP from the Congress in 2014. During his re-election to the assembly from Vijayraghavgarh in 2014, Pathak had declared assets worth Rs 141 crore. The Congress too took up the issue and demanded the resignation of Pathak.

Similar protests followed the transfer of Bhind SP Navneet Bhasin in December to Khandwa district, allegedly under RSS pressure. He had clamped down on mafias with close political links. His transfer too was justified by PTB on the grounds that he was merely shifted from one field posting to another and therefore there was no violation of SC guidelines.

As for the SPs of Dhar and Jhabua, it is believed they too got the marching orders under RSS pressure for arresting saffron activists for whipping up communal violence during Dussehra festivities in October, in two predominantly tribal districts in western MP.

Police morale hit a low in September last year when the home minister ordered the transfer of Balaghat Inspector-general of Police DC Sagar and SP Asit Yadav. They faced saffron wrath over alleged custodial thrashing of district RSS chief Suresh Yadav. He was arrested for circulating a provocative clip on WhatsApp regarding a purported speech of Asaduddin Owaisi, president of the All India Majlis-e-Ittehadul Muslimeen. Seven junior police officers were booked for attempt to murder and robbery in the same incident. For several days, Balaghat town was in turmoil as people protested the government’s “vendetta” against the police.

In MP, uneasy lies the head that wears a police cap.

Lead Picture: People protesting against the transfer of SP Navneet Bhasin in Bhind