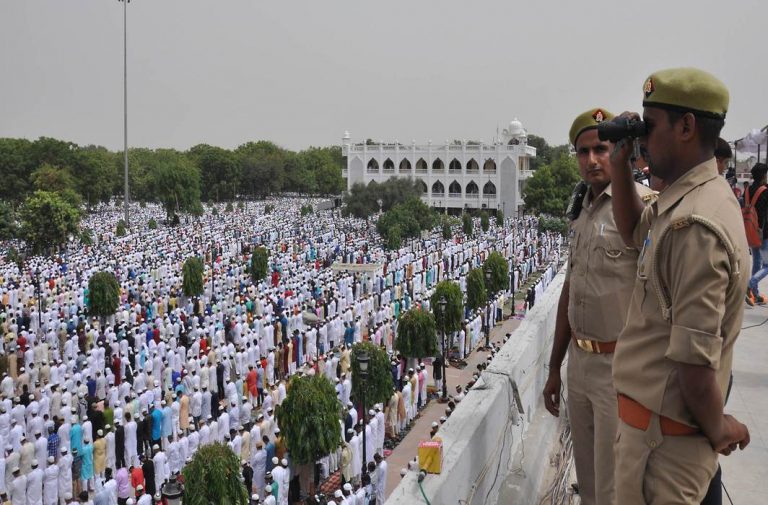 Above: Devotees offering namaz at a mosque in Lucknow/Photo: UNI

Based on a plea seeking the entry of Muslim women into mosques, the apex court has sought a response from the centre and various organisations by November 5

After the Supreme Court’s historic judgment of September 28, 2018, which allowed women of all ages to enter the Sabarimala temple in Kerala, thus ending an age-old practice, it is the turn of Muslim women. On October 25, the Supreme Court sought a response from the centre by November 5 on a plea filed by Yasmeen Zuber Ahmad Peerzade and Zuber Ahmad Nazir Ahmad Peerzade, a Pune-based couple. The PIL sought entry of Muslim women into mosques and said that such a restriction was “unconstitutional” and violative of fundamental rights to life, equality and gender justice.

Based on this plea, a bench of Chief Justice Ranjan Gogoi, Justices SA Bobde and SA Nazeer had issued notices to the centre, Union ministries of Women and Child Welfare, Law and Justice and Minority Affairs and the National Commission for Women in April this year, but no response was forthcoming. They now have to respond by November 5. The bench also issued notices to the All-India Muslim Personal Law Board, Central Waqf Council and Maharashtra State Board of Waqf.

Earlier, in July, the Supreme Court dismissed a plea by the Akhil Bharat Hindu Mahasabha which sought an order allowing Muslim women in mosques for namaz and ending the purdah system. It was filed by the president of the Kerala unit of the Hindu Mahasabha and the plea was first dismissed by the Kerala High Court in October 2018. It was filed in the High Court soon after the Sabarimala verdict. The High Court called it a publicity exercise as it did not have substantial evidence to prove that “Muslim women were being denied entry in mosques to offer prayers”. The Court was also not convinced about the locus standi of the petitioner. It said that Muslim women were free to approach it if they felt discriminated against. “The averments in the writ petition do not suggest that the petitioner is a person who should ordinarily be concerned with the rituals and practices of Islamic religion and, in particular, the alleged denial of entry of Muslim women in masjids. He has also not satisfactorily established his credentials as a person who has a history of espousing such causes before superior courts in our country,” the Court said.

As for the Pune-based couple, they were “seeking to uphold the right of Muslim women” to enter mosques for offering namaz. The petition claimed that Mohmdiya Jama Masjid in Pune had denied entry to women wanting to offer prayers in the mosque as there was “no such practice”. As this PIL cited the Sabarimala verdict which was against gender discrimination in religious places, the Supreme Court decided to hear the petition. The PIL sought that directions be issued to government authorities and Muslim bodies to let Muslim women enter mosques for offering prayers. The petition sought that Muslim women be permitted to enter through the main doors of mosques and have an Islamic right to visual and auditory access to the musalla (main sanctuary) and fatwa, if any, by Muslim bodies restraining women from entering mosques be set aside.

Arguing that under the Constitution there should be no discrimination against any citizen of the country on the ground of religion, race, caste, sex and place of birth, the petitioners said that “a life of dignity and equality is the most sacrosanct fundamental right and a Muslim woman cannot be prohibited from entering a mosque”. Such practices “are repugnant to the basic dignity of a woman as an individual” and also violate fundamental rights, it said. The petitioners also pleaded that the so-called customary tradition be held as “unconstitutional and violative of Articles 14 (right to equality), 15 (gender justice) and 21 (right to life and liberty) of the Constitution”.

The petition said that as mosques in India were being provided grants and other benefits by the government, they could be instructed to permit women inside for prayers. The couple decided to approach the Supreme Court after a mosque in Bopodi refused Zuber permission for a small place to organise an awareness programme for Muslim women. “That was the incident which changed my life and I decided to fight against it,” Zuber reportedly said. “I know each and every holy book in our religion and not a single book has such kind of references. In fact, the Quran never says anything about women’s entry into mosques,” he said. Yasmin reportedly added: “In Bukhari Sharif (one of the six major Hadith collections), it is clearly mentioned that women can be allowed in mosques for prayers. It is with this reference that we have filed our petition in Supreme Court.” The Peerzades approached Pune’s Khadki police station demanding police protection as they had decided to enter a mosque but the police refused help, citing law and order issues. Advocate Ashish Dubey, who is representing them, explained that “there is no mention of gender segregation” in either the Quran or the Hadith.

The issue of Muslim women sharing a mosque’s space with men for offering prayers has been hanging fire for some time. In 2016, Lucknow’s Aishbagh Eidgah threw open its gates for women to offer Eid prayers for the first time. A separate enclosure was created exclusively for women namazis in the Taiyab Hall of the Eidgah in what was then described as a historic beginning. Over 500 women offered their Eid prayers to support the initiative.

The segregation idea, however, was met with disapproval from Zakia Soman who led the fight for women’s right to enter the Haji Ali Dargah in Mumbai. Soman welcomed the Eidgah move as progressive because there were only a few mosques which allowed women to offer prayers but she described the idea of a separate enclosure as “discrimination and not differentiation”. “Why don’t they hand over control of mosques to women and make separate enclosures for men? If women are comfortable with praying in the same space as men, then let them be. Those who wish to worship separately can do so in the enclosure, but why make it binding?” she asked. Soman’s organisation, Bharatiya Muslim Mahila Andolan, had filed a petition in the Bombay High Court against curbs on women’s entry in the Haji Ali Shah Dargah. She insisted that nowhere does the Quran state that women should be denied entry in mosques for offering prayers.

But the lead against this discrimination was taken by a group of Shia women in Lucknow in 2013. Some 100 women led by Sadaf Rizvi, who was then only 18 years of age, offered namaz at the mosque inside the historical Asafi Imambara on August 15 to assert their equal rights.

The Asafi Imambara, about 220 years old, is a prominent tourist spot. It was a quiet beginning but a week later, on August 22, the numbers rose to 150 with women of all age groups joining the prayers. Rizvi, who was then a college student, said that women were equal partners in the community’s protest against the UP government’s ban on the azadari procession which Shias take out during Muharram. “Women turned out in large numbers to defy the government’s ban on this Shia procession, together with men belonging to the community,” she was quoted as saying. During the agitation both men and women were arrested. “We, therefore, thought that when we are acceptable as equal partners in agitations and demonstrations, why we couldn’t participate in Friday namaz in a mosque,” she said.

pilgrimage, why should they be stopped from doing so in mosques along with men.

The highly respected Shia cleric, Maulana Kalbe Sadiq, who has been ailing for the last few years, supported Rizvi’s move, saying that, in any case, women go to mosques in Saudi Arabia and Iran.

Zafaryab Jilani of the All-India Muslim Personal Law Board was also of the view that there is no ban on entry of women in mosques nor on Muslim women offering prayers there. He also cited the example of Mecca and Medina mosques where women are allowed to offer prayers in mosques.

Will this too be a Sabarimala moment for the Supreme Court?