Citizenship Amendment Act does not affect legal, democratic or secular rights of any Indian citizen: Centre to Supreme Court 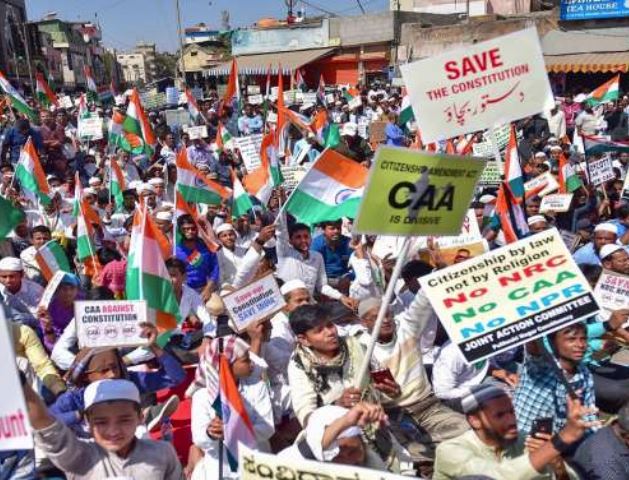 The Central government has told the Supreme Court that the 2019 Citizenship Amendment Act (CAA) does not affect the legal, democratic or secular rights of any of the Indian citizens.

In its latest affidavit filed by the government centre informed that the existing regime for obtaining citizenship of India by foreigners continues to remains untouched by the CAA . It also added that the legal migration on the basis of valid documents and visa, continues to be permissible from all countries of the world including from the three countries specified in the CAA

The affidavit clearly mentions that the CAA is merely a limited legislative measure, circumscribed in its application which does not affect the existing legal rights or regime concerning citizenship [falling outside the purview of specialized measure] in any manner.

The Centre has questioned the locus of the petitioners, informing that the matters pertaining to immigration policy, citizenship and exclusion of immigrants lies within the domain of the parliament and which cannot be questioned by PIL.

The affidavit mentioned that it is the executive policy of the sovereign manifested by competent legislation, which would govern the decision making.

It further added that the Legislative policies are designed entrusting exclusively to elected representatives.

The affidavit talked about the Power of exclusion of immigrants which has an impact on the foreign policy of a State and by extension, affects the security apparatus of the State and would fall squarely within the domain of the Parliament.

The Central Government has filed the affidavit specifically dealing with issues of of the petitions filed with respect to the the north-eastern parts of the country, which special reference to Assam.

The CAA, which was passed on December 12, 2019, amends Section 2 of the Citizenship Act of 1955 which defines “illegal migrants”.

It added a new proviso to Section 2(1)(b) of the Citizenship Act . As per the same, persons belonging to Hindu, Sikh, Buddhist, Jain, Parsi or Christian communities from Afghanistan, Bangladesh or Pakistan, and who have been exempted by the Central government under the Passport (Entry into India) Act, 1920, or the Foreigners Act, 1946, shall not be treated as “illegal migrant”.

The new proviso has said that the such people shall be eligible to apply for citizenship under the 1955 Act.

The CAA had specifically excluded the Muslim community from the proviso, which basically led to the protest all over the Country triggering protests across the country and a slew of petitions were filed in the Supreme Court.

The contention by the petitioners is that the CAA discriminates against Muslims on the basis of religion which are a gross violation of Article 14 and violates right to equality.

The Supreme Court in January 2020 had issued notice in a batch of over 140 petitions, without staying the Act. The Court had hinted for a constitution bench but it has not come as yet.

The affidavit by the Union Home Ministry clearly mentions that the CAA tailored legislation which seeks to address a problem that has been troubling India for decades amd needs a specific solution.

The Government submitted that CAA is a specific amendment which seeks to solve problem prevalent in the specified countries in context to the persecution on the ground of religion.

It also talked about the perception of fear that may be prevalent amongst minorities as per the de facto situation in the said countries.

The government submitted that the Parliament, had taken due cognizance of the said issues over the course of the past seven decades and having taken into consideration the acknowledged class of minorities in three specific countries, has enacted the present amendment.

However the CAA does not seek to recognize or seek to provide answers to any kind of purported persecution that may be taking place across the world.

The Government responded to the petitioner on violation of Article 14 and said that the apex court itself has provided wide latitude to the parliament to legislate on subjects concerning foreign policy, citizenship, economic policy etc.

One of the petitioners had contended that certain parts within the country had been included under the ambit of the law while certain parts kept out which was in breach of federal structure of the country and violative of Article 14.

The Government further said that the Inner Line as notified under the Bengal Eastern Frontier Regulation, 1873, the question of the classification, cannot be a subject matter of challenge

The affidavit also adds that, with regard to Assam and Tripura, parts of which fall under the excluded areas and parts which do not, the said classification cannot be said to be discriminatory, the affidavit maintained.

The affidavit has underlined that the tribal areas of Assam and Tripura, which are the most vulnerable in terms of scant indigenous population, are falling within the excluded areas of the CAA.

It has submitted that the said portions of Assam and Tripura are classified at par with the entire states of Mizoram, Manipur and Arunachal Pradesh and almost entire states of Nagaland & Meghalaya being equally placed.

It was further submitted that with regard to the avowed object of the exclusion of certain areas from the CAA in order to protect the ethnic/linguistic rights and to protect them from getting swamped by large scale influx of migrants, the inclusion of non-tribal areas of Assam and Tripura in the CAA is not discriminatory as the said areas are not as thinly populated as other excluded areas and would not face the same consequences in case of immigration of persons.

The matter will be heard today by a bench headed by a Chief Justice of India UU Lalit led bench.