The bench said that this matter was heard by Justice RS Reddy and the problem is that he is unavailable because the vacation has started. 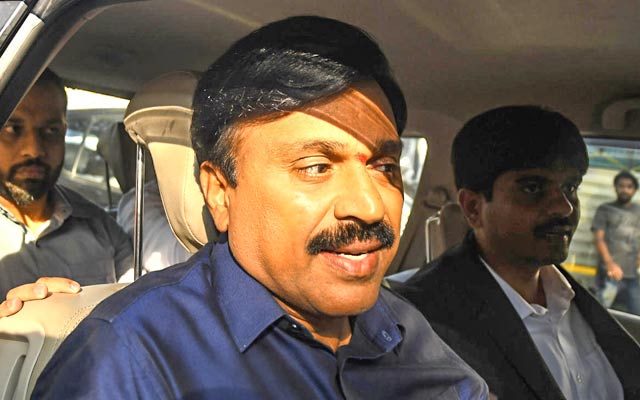 The Supreme Court bench of Justices Ashok Bhushan and M.R. Shah today directed the plea of former Karnataka minister and mining baron Gali Janardhana Reddy for relaxation of his bail condition to be listed before the Chief Justice bench.

The bench said that this matter was heard by Justice RS Reddy and the problem is that he is unavailable because the vacation has started.

The plea by filed by former Karnataka minister and mining baron Gali Janardhana Reddy, sought relaxation of his bail condition and allow him to stay in his native Ballari district.

In the earlier proceedings, The Central Bureau of Investigation (CBI) said that the mining baron was at the centre of “one of the most notorious mining scams” of the country and his return to Ballari would spell disaster for the trial.

A Bench led by Justice Ashok Bhushan heard senior advocate Mukul Rohatgi counter the CBI for Reddy, saying the blame for the agency’s inefficiency to complete a trial within time could not be put on him.

“The trial may take a lifetime the way it’s going. You (CBI) cannot blame me. Am I guilty for the six-year delay in the trial? Am I to suffer externment from Ballari forever?” Mr. Rohatgi asked.

Additional Solicitor General Madhavi Divan, for the CBI, said Reddy was given bail in the case in 2015 on the express condition that he would not enter Ballari. “Doing away with this condition would mean doing away with all conditions of the bail,” Divan argued.

Divan said Reddy was a “powerful man”. There were threats on the lives and property of the witnesses, many of whom live in Ballari and some of whom are public servants. She said Reddy’s presence in Ballari would turn them hostile.

“With great difficulty, we have been able to persuade them to testify. His (Reddy’s) presence in Ballari permanently may have an adverse effect on them,” Ms. Divan said.

The law officer said the delay in trial was entirely due to the accused persons “crowding the docket” of the trial court by filing petitions, one after the other, “like a relay race”, to discharge and quash the case against them for one reason or the other.

“They have been playing a cat-and-mouse game by filing discharge after discharge petitions… The tactics of the accused have been the cause for the delay in trial… Now, he cannot turn around and make it into a virtue and seek relaxation of bail condition. This is an attempt to jettison the trial… Please allow the trial to proceed,” Ms. Divan argued.

Mr. Rohatgi countered that the agency’s version of him trying to delay the trial was a “cock-and-bull story”. He said his client could not remain “expelled” from Ballari while the trial continued to be a non-starter.

“There are 300 witnesses and the trial has not begun,” Mr. Rohatgi exclaimed.

Divan said Reddy had been allowed to travel to Ballari to attend family functions in the past. The Bench reserved the case for orders.