The bench of Justices Ashok Bhushan and M.R. Shah asks state governments why they didn't stick to court orders of June 9, 2020. 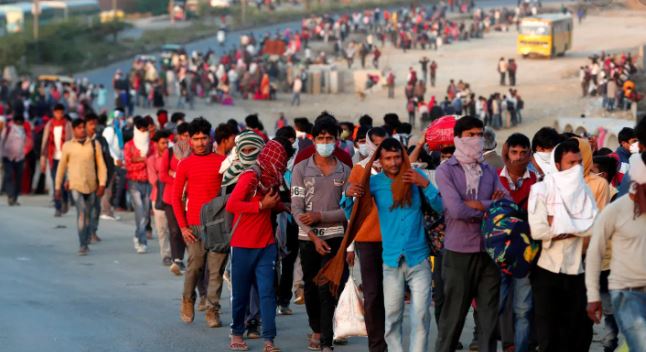 The Supreme Court on Thursday asked the Central government and the governments of Delhi, Haryana and Uttar Pradesh to come up with their proposals and plans on providing relief to stranded migrant labourers in the near-lockdowns imposed in the three states.

The bench of Justices Ashok Bhushan and M.R. Shah ordered, as an interim measure, dry ration to migrant workers in National Capital Region under Atma Nirbhar Bharat Scheme or any other scheme be provided by the Centre, Delhi, Uttar Pradesh, Haryana utilising the PDS prevalent in each State with effect from May 2021.

The court said while providing ration, the authorities shall not insist on identity card and issue ration on self-declarations.

The Supreme Court ordered the three governments to open community kitchens for stranded migrant labourers so that they and their family members who are stranded could get two meals a day.
The Bench also came down heavily on the state governments and asked the various state governments, “Why our order of June 9, 2020 was not adhered to by the state governments? We cannot make this plea infructuous. Last year, we issued directions in June on migrant workers, which had to be complied with.”

“We may issue direction to clarify to some state government as to what has been done. We don’t want all states to be here and be a mass. We will confine to only 6-7 states like UP, Bihar, Gujarat. We will call upon them to file the replies,” the Bench said.
All these directions came while hearing an urgent application filed in the suo motu case of 2020 by activists Harsh Mander, Anjali Bhardwaj and Jagdeep Chhokar, seeking directions to ensure that migrant and stranded labourers are not deprived of ration and food security.

The applicants contended that even though the states have been imposing decentralized Covid-19 curfews and lockdowns more cautiously this year they have not extended any welfare support to the working classes and migrants.

The bench has listed the matter for further hearing on May 24.