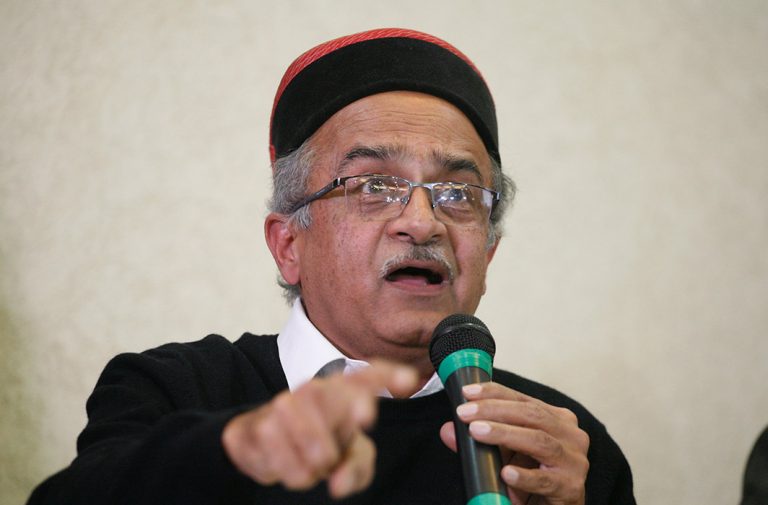 The Supreme Court, on Wednesday (February 6), issued a notice to advocate Prashant Bhushan on a contempt of court petition filed by Attorney General KK Venugopal. Bhushan accepted the notice in person and has been directed to file his reply within three weeks.

Venugopal had moved the plea against Bhushan after the latter contented, through a series of tweets, that the Attorney General had misled the apex court last week on the process followed in the controversial appointment of Nageswara Rao as the interim director of the CBI. During a hearing on a plea filed by NGO Common Cause, Venugopal had told the Supreme Court bench led by Justice Arun Mishra that the selection committee mandated to pick the CBI director had cleared Rao’s appointment as interim head of the agency, first when CBI director Alok Verma was divested of his responsibilities on October 23 and then again when he was summarily dismissed by the panel on January 10.

Rao’s stint as interim CBI director ended on February 2 after the selection committee, by a 2:1 majority decision, appointed former Madhya Pradesh Director General of Police, Rishi Kumar Shukla as the new full-time director of the agency. With Shukla having taken over charge of the investigation agency, the petition challenging Rao’s appointment has become inconsequential.

On Wednesday, as the bench of Justices Arun Mishra and Naveen Sinha resumed hearing arguments in the petition challenging Rao’s appointment, the issue of whether Bhushan can be held in contempt for his tweets took precedence.

Curiously, Venugopal insisted that he did not favour the court giving out any punishment to Bhushan on account of possible contempt and that he would, instead, prefer “authoritative words” from the court on the issues red flagged by him. However, Venugopal’s immediate junior in the government’s team of law officers, Solicitor General Tushar Mehta, implored the bench to penalize Bhushan.

Venugopal informed the bench that the selection committee had discussed the issue of Rao’s appointment as interim CBI director and that even Kharge had signed on the panel’s decision. Justice Mishra wondered how Bhushan posted the tweets about a matter that was sub judice. The Attorney General then contended that Bhushan’s action could be seen as “contempt by speech” since the comments “lower the authority of the court” and “intervene with the working of the court”.

As Justice Mishra lamented the “unwelcome practice” of lawyers routinely making statements on pending matters, the Attorney General pointed out that even as the case was proceeding, “12 cameramen are waiting for lawyers outside” to get their comments. Venugopal then urged the petitioner (Bhushan) to desist from discussing sub judice matters in public and added that while it is presumed that comments made in public and in the media do not affect the opinion of a judge, this may not always happen.

Justice Mishra said that the Bar should not display a sycophancy towards the Bench and added that lawyers like the Attorney General and senior advocate Fali Nariman had made the Bar “worthy and admirable”. Justice Mishra then proceeded to say that the extant case (the contempt petition) involves larger issues and that the bench would want to “settle the law” on them. Justice Sinha concurred with Justice Mishra and added that “time has come to realize that with freedom comes responsibility”.

Venugopal then insisted that while does want the law on contempt settled in the present case, he is not pressing for any punishment to be meted out for anyone.

Solicitor General Mehta, disagreeing with the Attorney General, told the bench: “I can cite 10 instances where a judgment is passed by the highest court and some lawyers say it is a black day for the judiciary.”

Mehta, on behalf of the Centre, proceeded to say that the bench should award a “deterrent punishment” to Bhushan as “the respondent has been involved in several such instances.” He added that the “Lordships’ magnanimity should not be taken as a form of weakness” and urged the bench to issue a notice to Bhushan.

Responding to the Solicitor General’s request, Justice Mishra said: “Punishment shouldn’t come for lawyers usually. Contempt is like a brahmashtra. It should be used sparingly so that it doesn’t lose its value. We are mindful of how reckless comments deprive dignity of others without a due process of law… the larger issue here is that media trial decides the reputation of a person who, ultimately, may win in court but has been widely criticized in public (sic). There is no repairing mechanism for that reputation”.

The bench then issued a notice to Bhushan, which he accepted in open court. While Bhushan has to reply to the contempt notice within three weeks, the contempt plea has been posted for its next hearing on March 7.