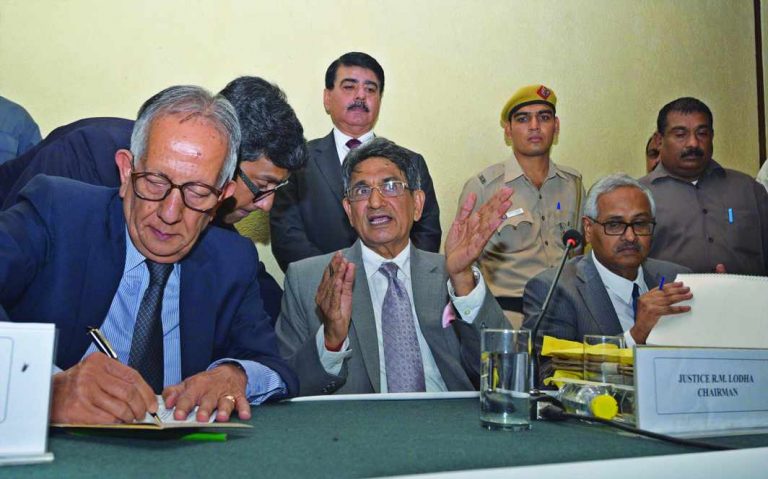 Above: Even after a year, the BCCI has not implemented the recommendations of the committee headed by Justice Lodha (in grey tie). Photo: UNI

Taking a serious note of BCCI’s lack of compliance with its directives, the apex court ordered it to frame and submit its draft constitution by September 19

The unwillingness of the Board of Control for Cricket in India (BCCI) to comply with the directives of the Justice RM Lodha Committee has invited the Supreme Court’s censure. On August 23, a bench of Justices Dipak Misra, AM Khanwilkar and DY Chandrachud ordered the BCCI to frame and submit its draft constitution by September 19 as per its order of July 24. The Court also issued notices to CK Khanna, the acting president of the Board, Amitabh Chaudhary, secretary, and Anirudh Chaudhary, the treasurer, asking them to be present in person before the Court on that day.

The Board is supposed to be under the supervision of the Court-appointed Committee of Administrators (CoA), but it has been playing hard to get for a long time and dodging many critical issues. Recently, its former president, N Srinivasan, who was ousted from the Board amid the IPL spot-fixing scandal, suddenly attended a special general body meeting as an invitee of a member. This infuriated the CoA and it complained to the Court through amicus curiae Gopal Subramanian, saying that not only had the Board not implemented any of the Lodha Committee’s recommendations, but it was far from even formulating a draft constitution.

In its order of August 23, the Court laid special stress on the draft constitution, the foundation on which the new BCCI has to be built.

The Court has been soft on the Board officials, even going to the extent of saying that the Lodha Committee recommendations should be implemented as far as “practicable”. However, at the July 26 special general meeting, the Board refused entry to its CEO, Rahul Johri. Johri is a CoA-appointee and the Board wanted only its members present.

This further soured relations between them and CoA chairman Vinod Rai reacted angrily to this. However, all is not well within the CoA either as it has been rocked by differences and resignations. There is talk of Rai’s manner of functioning which has rubbed some the wrong way. The Committee was formed with Rai, former Indian cricket captain Diana Edulji, historian and cricket buff Ramachandra Guha and former managing director and CEO of IDFC Limited Vikram Limaye. With Rai being a former Comptroller and Auditor General of India and the others also commanding respect, the Committee was supposed to be well-rounded.

While Guha resigned in May citing injustice in the way former India coach Anil Kumble was humiliated by captain Virat Kohli and the selection committee, Limaye joined as the head of the National Stock Exchange. Edulji too has not been comfortable in her role as a super administrator and had hit out against the Board’s “misogynistic” ways. People have said that the CoA is actually a one-man committee comprising of Rai.

However, Rai has the backing of the apex court, and it has laid down strict guidelines for the CoA to follow. In summoning the BCCI officials, the Court has shown extraordinary seriousness.

Speaking to ANI, Justice Lodha said: “This (the summoning of the officials) shows that the Supreme Court is now viewing non-implementation by office bearers quite seriously, therefore the necessity to call the office bearers to court. I hope the office bearers understand the gravity of the matter now and implement the reforms at the earliest.” In court, Justice Misra said: “It is submitted by amicus curiae Gopal Subramanium and advocate Parag Tripathi, appearing for the Committee of Administrators, that none of the recommendations of the Justice Lodha Committee has been followed.” However, senior advocate Kapil Sibal, who is appearing for the Board, said he held a contrary view.

These are some of the recommendations of the Board:

Like cricket, the fortunes of the BCCI also seem a little uncertain.