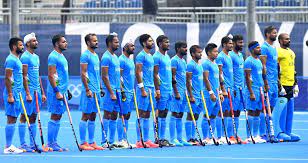 The Supreme Court on Tuesday refused to entertain a PIL, seeking directions to the Centre for officially recognising the game of hockey as the national game of India.

“There are lakhs and lakhs of people like you, what should we do? There has to be an individual whether a man or a woman. There is no individual cause. What you said is right, we have all the sympathies we share the same vision. You are entitled to do anything you want. We cannot allow this, either you withdraw or we are dismissing it. It is not possible.”

In his plea, petitioner-in-person Vishal Tiwari stressed on the importance of Sports in Nation-building. He said Sports are directly associated with the Nation’s pride. “We are participating in Olympics for several decades but the results are not satisfactory. Sportspersons need huge support and facilities from the Centre and the States,” the petitioner noted.

Tiwari also sought directions for the advancement of athletics games/sports played in Olympics and providing latest advance training, infrastructure and funds to sportspersons, enabling them to win maximum gold medals in Olympics.

The petitioner said India has not bagged any Olympic medal in hockey in the past 41 years. In Tokyo 2020, Olympics India was successful to secure a Bronze medal in Hockey after 41 years. The history of hockey in India has been a source of pride for the entire country. India has always been one of the greatest dominators of the game, he added.

The petitioner pointed out the inability of India’s champions to compete with the best on the greatest platform in the world was due to lack of exposure in top-level competitions, infrastructure, international level facilities and training.

While considering the above, he prayed for initiating public accountability of the funds allocated for this industry and initiation of promotional activities with due broadcasting of sports, directions for the upliftment of the sports industry/athletics games of Olympic by providing due funds, facilities and infrastructure and for officially recognising the game of hockey as the national game of India.