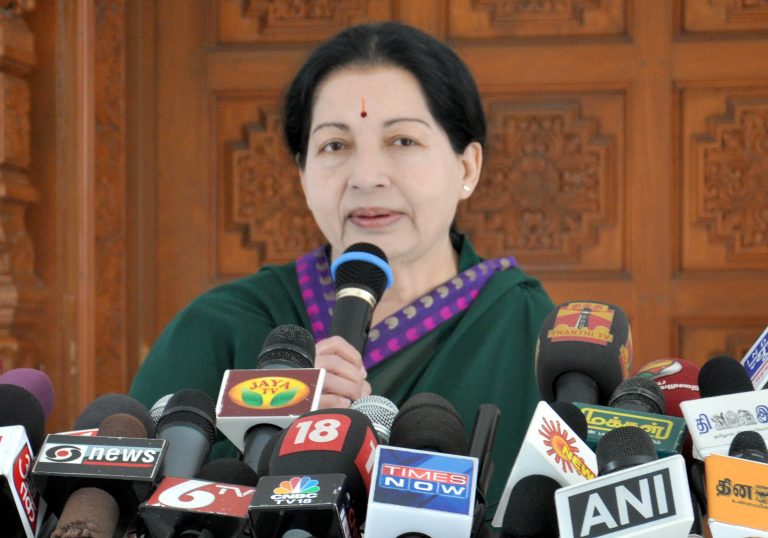 Above: The practice of filing defamation cases by the Jayalalithaa government started in January 2012/Photo: UNI

The Madras High Court has quashed a case filed by J Jayalalithaa against India Today’s Tamil edition and asserted that if the Press is gagged, democracy will be in peril

In a major morale booster for the media in Tamil Nadu, the Madras High Court has quashed a defamation case filed by then Chief Minister J Jayalalithaa against India Today’s Tamil edition (now defunct) in August 2012. While quashing the case, Justice PN Prakash gave a clear and strong verdict. He said: “Be it noted that the Press has got a solemn duty to place all the concatenation of events, both recent past and distant past, concerning political parties and public figures, for public consumption and for refreshing the otherwise short public memory.

“For doing this, if the Press is gagged, democracy in this country will be in utter peril. India is a vibrant democracy and the fourth estate is indubitably an indispensable part of it. If the voice of the fourth estate is stifled in this manner, India will become a Nazi State and the hard labour of our freedom fighters and makers of our Constitution will go down the drain. There may be some occasional transgressions by the Press; however in the larger interest of sustaining democracy, those aberrations deserve to be ignored. Nobody is invited with platters for coming into public life. Therefore, after voluntarily coming into public life, one cannot be heard to feign sensitiveness and trample the Press for no good reason. This Constitutional Court will be failing in its duty if such attempts by the mighty State are not resisted.”

The 2012 India Today Tamil edition had carried an article about the dismissal of then Agriculture Minister KA Sengottaiyan from the cabinet. The article had said that it was at the behest of VK Sasikala, confidante of Jayalalithaa, that Sengottaiyan had been dismissed as she believed that he was responsible for her dismissal from the ruling AIADMK.

The article further added: “Sasikala and over a dozen of her relatives were dismissed by Jayalalithaa on December 19, 2011 from the ruling AIADMK and Sasikala rejoined the AIADMK on April 1, 2012, but none of her relatives were rehabilitated in AIADMK. After taking over as chief minister of the state for third time in May 16, 2011 by winning the assembly elections and till Decem­ber 19, 2011, Jayalalithaa has dropped at least half a dozen ministers. But between December 19, 2011 and April 1, 2012, i.e, when Sasikala was out of AIADMK, not a single minister was dropped.” The article argued that when Sengottaiyan was dismissed in July 2012, it was nothing but “payback time for Sasikala”.

Taking serious objection to this article, Jayalalithaa filed a defamation case against India Today’s Tamil edition and nine persons were arraigned as accused, including the then editor of India Today’s regional editions, MJ Akbar, in the Principal Sessions Court in Chennai.

India Today filed a petition to quash this case in the Madras High Court. Now, after six and a half years, it has been quashed. The Court said: “On a reading of the aforesaid portions, this Court is not able to find even an iota of material to show that there is any imputation intending to harm the reputation of Jayalalithaa, the then Hon’ble Chief Minister. However the Public Prosecutor submitted that on a reading of the entire article, the public could draw an inference that Sengottaiyan was removed from the ministership only at the instance of Sasikala and this would amount to imputation.”

Justice Prakash further said: “This Court is not able to agree with the aforesaid submission, inasmuch as, in the impugned complaint, this aspect has not been put forth at all and what has been put forth has been extracted above. That the complainant cannot build up a case beyond the allegations in the complaint is trite. Even on a reading of the entire article, this Court is not able to draw such an inference as argued by the Public Prosecutor and further, it is not open to this Court to strain the language employed in the article or to read between the lines, for arriving at such an inference. That apart, for maintaining a complaint of defamation via Section 199 (2) to (4) Cr.P.C., the imputation should be in respect of the conduct of the public servant in the discharge of his public functions. The impugned paragraphs extracted above only refer to the gaining of influence by Sasikala in the party affairs after a brief period of hibernation and coming back into the party fold.” Justice Prakash finally ruled that “in the ultimate analysis, the proceedings in C.C. No.11 of 2012 (concerned case number) before the Principal Sessions Court, Chennai, is an abuse of process of law and is accordingly quashed and as a sequitur, these writ petitions are allowed”.

Jayalalithaa came back to power for a third time after winning the 2011 May assembly elections. The practice of filing defamation cases against the media, politicians and anyone criticising her governance started in January 2012. Critics were forced to face defamation cases filed by Jayalalithaa, her council of ministers and some serving bureaucrats of the state government.

As of now, there are at least 160 defamation cases filed by them in the Principal Sessions Court in Chennai alone against the media and several Opposition leaders. Jayalalithaa herself filed over 20 defamation cases against various media houses and politicians like late DMK President and former CM M Karunanidhi, DMK President MK Stalin, Dr Subramanian Swamy and senior politicians belonging to different political parties in Tamil Nadu. Several media companies including The Hindu, The Times of India, India Today, Rediff.com, The Economic Times, NDTV and CNN IBN are still facing these cases.

Often, the cases were filed over trite issues. In 2014, then Janata Party leader and now Rajya Sabha MP Dr Subramanian Swamy had tweeted that it was not Jayalalithaa but he who was responsible for Tamil Nadu winning its rights in the Mullaiperiyar issue in the Supreme Court. For this, Jayalalithaa filed a defamation case against him. Similarly, when Tamil daily Dinamalar carried an article saying that the state government was contemplating privatising bus transport in rural areas, a defamation case was filed by the transport minister. The Times of India also faced the ire of the transport department when it published a front page story about massive corruption in road transport offices of the state. Promptly, a defamation case was filed by the department.

In fact, the Supreme Court after upholding the constitutional validity of defamation laws, said on July 28, 2016: “The penal provision of defamation should not be used to throttle dissent …the court must step in, if there are continuous efforts to harass persons by filing a number of defamation cases. Just because anyone calls a government corrupt or lacking in administrative ability he cannot be slapped with a defamation case. There has to be a tolerance to criticism. Defamation cases cannot be used as a political weapon and cases for criticizing the government or bureaucrats create a chilling effect. Even though we upheld defamation law, if we find there is a deliberate design to engage government law officers to file cases, it is the duty of the court to protect them.”

Strangely, even after Jayalalithaa passed away in December 2016, the defamation cases filed by her are continuing. There are varied opinions on this.

However, another section feels these cases are dead as Jayalalithaa’s demise snatches the right of the accused to cross-examine her. Therefore, continuing the cases after her death goes ag­ainst natural justice.

The jury is still out on this.