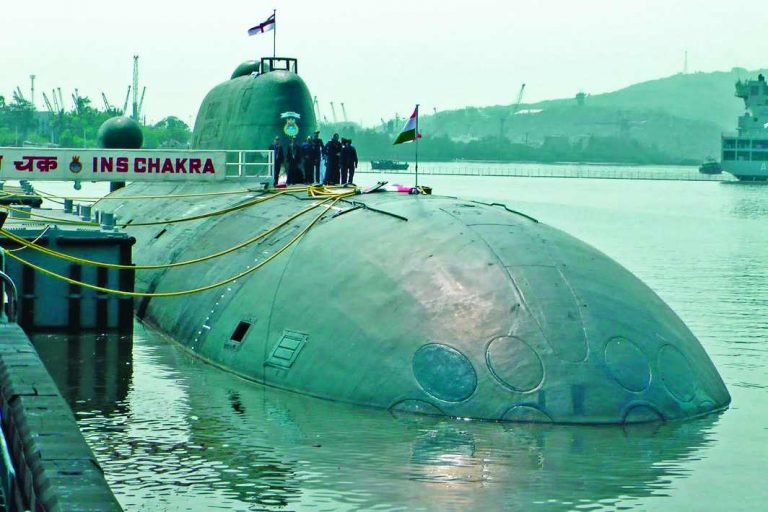 Above: Even though the officers on INS Chakra underwent elaborate training, none of them was found eligible for promotion. Photo: gentleseas.blogspot.in

Nepotism in the armed forces is not unheard of. In fact, over the years, this pernicious practice seems to have only grown. But most allegations of favouritism have remained limited to animated discussions over a drink at the mess or manifested themselves in anonymous complaints to the service chiefs. So, it did shake up the defence establishment when on July 31, Justice Virendra Singh, chairperson, and Lt Gen Sanjiv Langar, member, of the principal bench of the Armed Forces Tribunal (AFT) delivered a stinging order in which they were sharply critical of the nepotism that influences promotions in the navy.

The AFT came down heavily on Vice Admiral PK Chatterjee, who was the inspector general, nuclear safety, during 2010-12 for influencing the Annual Confidential Reports (ACRs) of candidates and halting their promotions to facilitate his son-in-law, Captain AV Agashe’s promotion. Chatterjee was fined Rs 5 lakh and the navy was asked to make its process of upgrading officers to the next rank impervious to such unhealthy influences.

The Tribunal noted: “It is disturbing and surprising that the Indian Navy does not have an inbuilt system to ensure that such probable occurrence between relatives are addressed institutionally, so that such a situation, as occurred in this case does not manifest.” The bench also made this significant observation in its concluding remarks: “Before parting with the judgment, we may observe here that Navy shall ensure that such like circumstances, which are completely avoidable, do not occur and in doing so, will specify orders and policies, to ensure there is no recurrence of such a possibility, which being unacceptable in any government department, in a service like Navy and Armed Forces of the Union; even a hint of such a convergence must never be allowed to manifest.”

The case is seen as significant because it involved the prestigious nuclear submarine programme of the navy. The controversy began in 2005 when the navy sent a team of officers and sailors to train in Russia. Their mission: to induct (Nerpa-K-I52), later rechristened as INS Chakra, a nuclear-powered 8,140-tonne Akula class submarine that the navy had leased from Russia for ten years. The two complainants in the case—Commanders SS Luthra and Ajay Zadoo—were among the seven officers who were sent to Russia to train in operating nuclear reactors on submarines. They underwent 40 months of training in two different phases.

Meanwhile, the navy was also developing its own nuclear-powered submarine, the Arihant, modelled on the Akula class submarine but with the additional capability of being used to deploy strategic nuclear missiles. The Arihant because of its heavier weaponry and payload was slow moving and required the support of a fast-paced attack submarine for protection. This was the reason why the INS Chakra was leased and inducted into the fleet.

The Arihant also had four reactor operating officers. But they were trained in India. Of the four, two were finally considered for promotion to the rank of captain. They included AV Agashe, the son-in-law of Vice Admiral PK Chatterjee. The latter also happened to be the Senior Ranking Officer (SRO) of the two submarine projects and had the powers to award points to the candidates in their Annual Confidential Reports (ACRs). The charge levelled by the complainants is that he reduced their grades and upped that of his son-in-law’s so that he was promoted while they were not even in the reckoning. A good ACR is essential to get promotions in government service, including the Armed Forces.

In fact, none of the reactor operating officers on INS Chakra was found eligible for promotion. This was rather ironical as they had received elaborate hands-on training in underwater submarine operations in Russia as part of a $100 million training programme—reportedly the most expensive one entered into by the Indian Armed Forces. The reactor crew of the Arihant, on the other hand, had not received the same level of training in undersea operations and had no practical experience of a similar kind. But two of them were promoted, including the son-in-law of the vice-admiral.

The AFT verdict clearly spells out the nepotism. After going through the records of the Promotion Board evaluation and deliberations, the Tribunal concluded that the ACRs were “manipulated” as alleged by the complainants. The order said: “What emerges is that not only has Respondent No. 3 (Vice Admiral PK Chatterjee) intervened in the case of the applicant and brought down his quantitative assessment convincingly, but he has in the same period steeply upgraded the quantitative assessment of Respondent No. 4, his son-in-law.”

After going through the records of the Promotion Board evaluation and deliberations, the Tribunal concluded that the ACRs, as alleged, were “manipulated”.

The Tribunal saw the manipulation of the ACRs as intentional and a deliberate attempt by the vice-admiral to bestow favours on his relative. “There is clear mala fide on the part of Respondent No. 3 related to the applicant, which emerges, further aggravated and pronounced by the fact that at the same time, he has consciously upgraded the profile of his son in law (Respondent No. 4) repeatedly, thereby benefiting him, the profile being critical to him, crossing the bar for the rank of Captain.”

According to sources in the defence ministry, given the categoric and explicit judgment by the AFT, it is unlikely that the case will be contested by the government. However, there are fears that similar instances of nepotism and unfair promotions could surface in the days to come.

“The unfair practice of basing promotions on ACRs which can be manipulated has to be stopped. Perhaps a re-view of the entire process of evaluation needs to be taken up,” said a source.